At least 53 dead in migrant shipwreck off Tunisia

Rescue operations have recovered 53 bodies after a vessel carrying migrants capsized off the coast of Tunisia. The passengers had been fleeing tensions caused by the conflict in Libya. 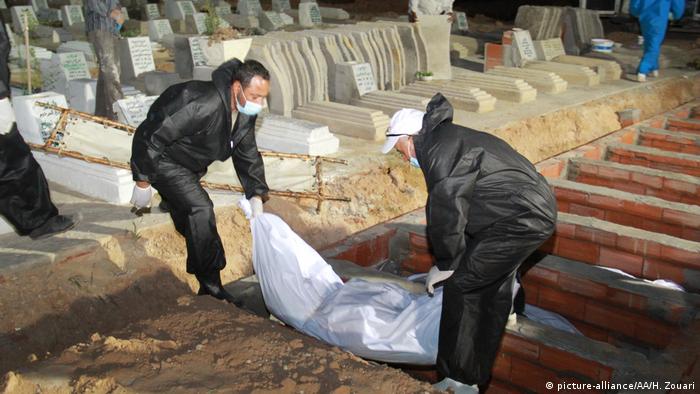 The death toll in a migrant shipwreck off of Tunisia's coast has risen to 53, Tunisian officials said Friday, as efforts to flee the conflict in Libya spike.

The boat had set sail last Saturday before capsizing and sinking over the weekend, officials said. The first bodies were recovered on Sunday.

The bodies of two toddlers and 20 adults washed up on the shores of Tunisia's Kerkennah Island in the Mediterranean Sea, while 19 more bodies were founding floating in the waters.

All passengers from sub-Saharan Africa

Many of the victims were buried in the coastal city of Sfax on Wednesday, the region's health director told The Associated Press.

It is likely that all bodies have been recovered, the head of the Red Crescent in Sfax told the DPA news agency. Friends of people on board said there had been 53 people on the vessel, according to a spokesperson for Sfax courts Murad al-Turki.

With the exception of the Tunisian captain, all of the victims are from sub-Saharan Africa, with most coming from the Ivory Coast, Tunisian authorities said.

According to the UN's refugee agency, illegal crossings from Tunisia to Italy increased by 150% between January and April compared to the same time period last year.

The newest deaths are "the inevitable result of restrictive and inhuman migration policies adopted by the European Union which are limited to a security approach to migration issues," said the Tunisian Forum for Economic and Social Rights, a nongovernmental organization that works on migration and refugee issues.

The EU has invested hundreds of millions of euros in stopping the conflict in Libya with the aim of slowing the wave of migrants attempting to reach Europe.

According to AP, a large portion of the funds has been diverted to networks consisting of militias, traffickers, and coast guard members who exploit migrants.

Qatar is one of the world's richest countries, but around 100 laborers from Southeast Asia and Africa working on a prestigious stadium project have not been paid in seven months, Amnesty International claims. (11.06.2020)

Police in France and Belgium have arrested more than two dozen suspects over the deaths last year of 39 Vietnamese migrants in the UK. The suspects are accused of belonging to an illegal smuggling organization. (27.05.2020)

A group of migrants from sub-Saharan Africa managed to scale the fences at Melilla's border in a large group, a common tactic to avoid capture. It was the latest in a series of breaches of the Moroccan border with Spain.

The boat had originally set off towards Europe from the Libyan city of Zuwara. Over 120 migrants were aboard.

UN officials intercepted over 1,000 migrants in one day off the coast of North Africa attempting a dangerous journey across the Mediterranean Sea towards Europe.