Qatar is one of the world's richest countries, but around 100 laborers from Southeast Asia and Africa working on a prestigious stadium project have not been paid in seven months, Amnesty International claims. 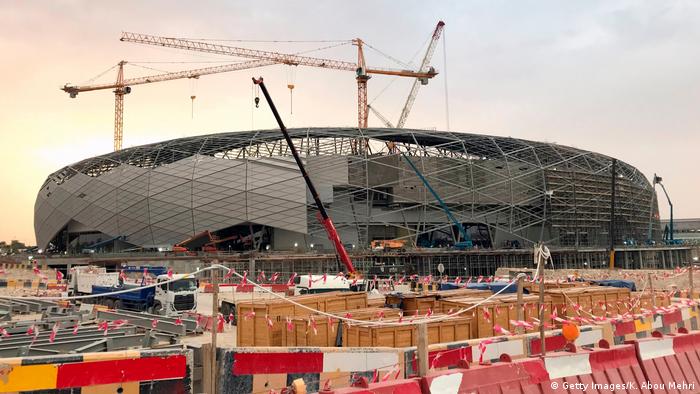 Migrant workers on a construction project for a FIFA World Cup stadium in Qatar were not paid for up to seven months, according to human rights organization Amnesty International.

Around 100 workers of Qatari subcontractor, Qatar Meta Coats (QMC), are still waiting to be paid in full, Amnesty said Thursday. Some workers had received partial payment after the rights group reported the case to Qatar's authorities and world football's governing body FIFA.

The laborers, from countries including Ghana, Kenya, Nepal and the Philippines, were contracted by the Qatari company for facade work on the Al-Bayt stadium.

"This case is the latest damning illustration of how easy it still is to exploit workers in Qatar, even when they are building one of the crown jewels of the World Cup," said Steven Cockburn, Amnesty's Head of Economic and Social Justice.

After learning about the unpaid salaries in July last year, the Supreme Committee for Delivery & Legacy — the tournament's Qatari organiser — announced on Thursday it had taken QMC off the stadium project and banned it from working on World Cup projects until further notice.

FIFA told Amnesty it contacted the Committee once it became aware of the investigation, and said it is now working to ensure that outstanding wages are paid.

"Although recent payments will provide some welcome relief for workers, Qatar's World Cup organisers told us they had known about the salary delays since July 2019. This raises the question of why Qatar allowed workers to continue working for months without pay," Cockburn said.

The rights watchdog also noted that QMC has not renewed residency permits for most of its workers which are a requirement for foreigners working in Qatar. Some of the workers interviewed said they had paid fees ranging from $900 to $2,000 (€790- €1,757) to recruitment agents in their own countries for the job in Qatar, Amnesty said.

One of the wealthiest countries in the world, the oil rich Gulf nation said last year it had introduced a series of reforms to improve workers' rights and conditions, such as outlawing the Kafala system that ties a worker to their employer and prevents them from leaving Qatar without their employer's permission.

Qatar has come under criticism following the deaths of hundreds of foreign workers, including at FIFA 2022 World Cup venues. It's pledged reforms, but what's happening on the ground? Anchal Vohra reports from Qatar. (30.08.2018)