The government has been under growing international pressure to reform its labor system likened to modern day slavery. The country is due to host the World Cup in 2022 and is undergoing a massive building boom. 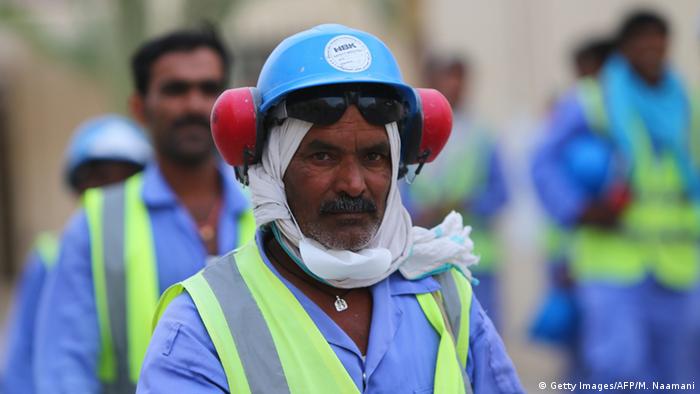 Even as Qatar announced the abolishment of its highly criticized labor law known as "kafala" critics immediately pounced on the reform measures, calling them little more than window dressing.

Labor Minister Issa bin Saad al-Jafali al-Nuaimi announced on Monday that the kafala rules were being abolished as of Tuesday.

A contract-based system is to replace the much maligned system that has governed the country's 2.1 million foreign workers.

The kafala system has been likened to a form of modern day slavery because it required foreign workers in Qatar to have a local sponsor. These workers were unable to change jobs or leave the country without their sponsor's permission.

The country is in the midst of a building boom ahead of the 2022 World Cup, soccer championship - stadiums, hotels and transit networks are all being rapidly assembled - primarily with foreign labor from poor countries - to meet the expected demand in little more than five years.

The rush has left workers at the mercy of their sponsors and subject to abuse and exploitation.

"The new law is the latest step towards improving and protecting the rights of every expatriate worker in Qatar," Nuaimi said. "It replaces the kafala system with a modernized, contract-based system that safeguards workers' rights and increases job flexibility."

Qatari officials added that freedom of movement is guaranteed under the new rules, including giving workers the right to change jobs if they are mistreated.

But apparently anticipating a harsh international response, Nuaimi called on critics to give the new rules time to take effect.

"We urge the international community not to draw any definitive conclusions until there has been time to see the new law in action," he said.

Earlier this year AI accused Qatar of engaging in "forced labor," and immediately issued its own scathing report Monday in response to the government announcement, saying the reforms would not "scratch the surface."

"This new law may get rid of the word 'sponsorship' but it leaves the same basic system intact," warned Amnesty's James Lynch.

"It is good that Qatar has accepted that its laws were fuelling abuse, but these inadequate changes will continue to leave workers at the mercy of exploitative bosses."

The ITUC General Secretary Sharan Burrow was similarly dismissive of the government's reforms.

"This is just new labels on old laws," Burrow said. "The exit permit system still remains a fact of life. This is just a relabeling of an extremely exploitative system."