Qatar has come under criticism following the deaths of hundreds of foreign workers, including at FIFA 2022 World Cup venues. It's pledged reforms, but what's happening on the ground? Anchal Vohra reports from Qatar. 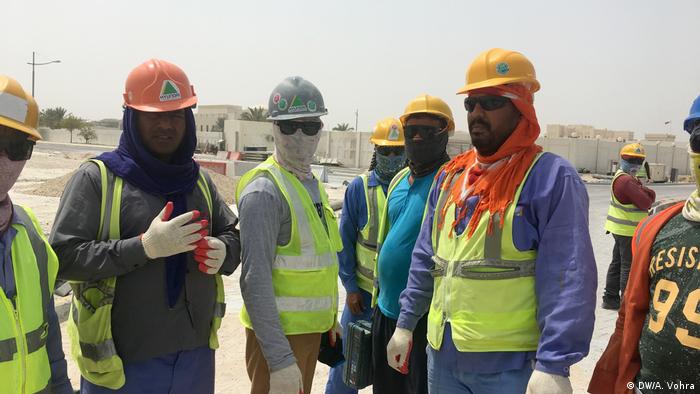 On a midsummer afternoon, workers are carving out a diamond in the desert; at least, that's what the Education City Stadium is designed to be. It is expected to host 40,000 football fans and be ready by 2019.

On July 28, DW saw more than a dozen workers laboring between 11:30 a.m. and 3 p.m., hours designated as a rest period by the state of Qatar between June 15 and August 31, the hottest time of the year.

Though experts argue there should not be any work during the day in the harsh summers — when temperatures can rise to 50 Celsius (120F) — Qatar itself has banned work during these three and a half hours. And, yet, DW witnessed a clear breach of law even during the tiny window of reprieve for the workers.

Hundreds have died at work sites, including World Cup projects in Qatar. In 2012, 520 workers died and more than 300 of those deaths remain unexplained. Qatar says workers have died for reasons unrelated to working conditions, such as heart attacks or respiratory failure, but human rights bodies say these are euphemisms for heat-related deaths and argue that Qatar doesn't provide autopsy reports with the aim of hiding the real reasons.

Nicholas McGeehan, an expert on migrant workers' rights in the gulf who has researched workers' deaths for Human Rights Watch, was astonished at DW's findings. He sees the violation at a FIFA-linked stadium to be even more serious because FIFA projects are governed by the Supreme Committee for Delivery & Legacy, which promises higher standards of welfare for workers. "This incident suggests contractors are not even abiding by the very basic laws," he told DW.

Activists have tried to highlight these health issues to the World Cup organizers. Despite those efforts, lapses continue and activists such as McGeehan question whether Qatar is serious about changing its attitude toward the workforce.

"Construction is a conspicuous business — it is visible and loud — so it is hard to believe they felt they could evade detection," he said. "The more plausible explanation is that they felt they would escape sanction, and if this is the case it calls into question not only the committee's ability to protect workers but its commitment to that endeavor."

DW shared the video evidence with the committee. Members acknowledged that during these hours work is indeed prohibited and have promised an investigation. "We are concerned to see the evidence you have presented of work that appears to contravene Qatar's summer working hours directive underway at the Education City Stadium. Our workers' welfare department and health & safety teams, working with the relevant government bodies, are now conducting a thorough investigation. We will take corrective and punitive action in the event of any breach of our standards or the law."

The Administrative Development, Labor and Social Affairs Ministry responded to DW's query: "Over 400 labor inspectors form an important part of our strategy to ensure that Qatar protects its guest workers and continues to be a leader in the region with regards to labor reform."

During DW's visit, we were not given permission to go inside any of the World Cup-related infrastructure because of the "short notice," of our request, officials said. 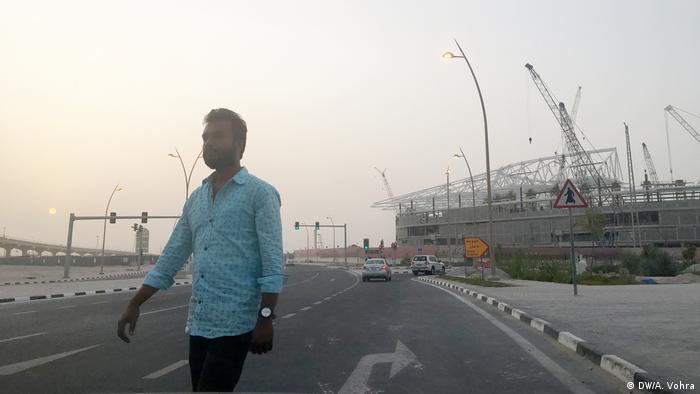 Guest workers live in dormitories such as those in the Barawa camp, a 45-minute drive from the Education City Stadium.

The engravings of tiny minarets on the off-white walls are the only elements that add some color to the monotonous appearance of the camp tucked far away from the locals.

Shrouded in dust, it has a mosque, a few restaurants to cater to the appetite of the South Asians and shops selling SIM cards.

Authorities provide air-conditioned buses to transport the workers and have digitized the payment system. The workers in this camp acknowledge these changes and tell us that they get their monthly salaries on time, but are unhappy about the meager amount of 750 rials (€175/$200).

And the low living standards make it harder to survive the heat and humidity in Qatar.

Mohammed Akram and Wasim Khan* are sitting on a patch of grass littered with cigarette butts and empty coffee cups. They're both from India and are working as electricians on Qatar Rail's metro site.

'A dog's life is better'

Akram says he's completely unaware of any reforms. He's been working in the richest country in the world for 10 years and says that, except for the employer's shifting him from a modular cabin to a concrete camp, nothing has changed for him, even in the two years since Qatar pledged reforms. 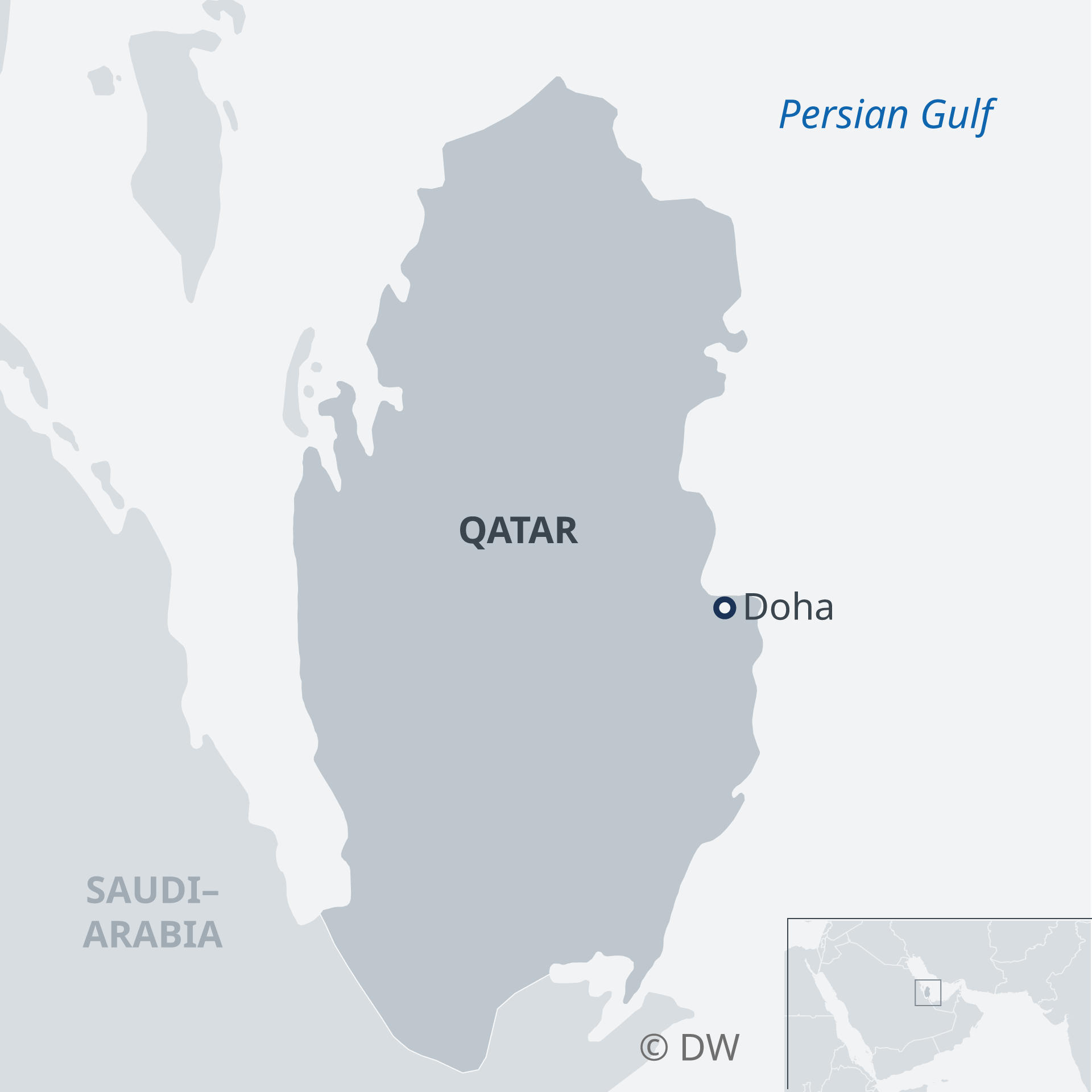 Read more: Five years to go until Qatar 2022: What we know so far

"We are seven in one room, even the food we get is stale," he told DW, and seemed confused when DW asked him about his passport. "The employer confiscated it the moment we arrived. I am hearing from you for the first time that I can keep my passport."

Qatar pledged to reform and abolish the so-called Kafala system, which monitors workers. Critics say it restricts their freedom of movement and puts them at the mercy of their employers. A major part of the reform was supposed to ensure that the travel documents remain with the workers. In the Barawa camp, most workers say their passports remain confiscated.

Akram's roommate, Wasim Khan, is already debating whether to pack his bags and go back to India. He arrived in Qatar six months ago and says life in the camp is unbearable.

"A dog's life is better in my village," he told DW. "I am drenched in sweat all day; it's so hot that my head spins."

Often, he has to fit electrical connections which means squeezing into a tiny space between the ceiling and the roof. "Then in the night, I have to share my room with six others," he said. "Why? I can earn half at home but live, not die." 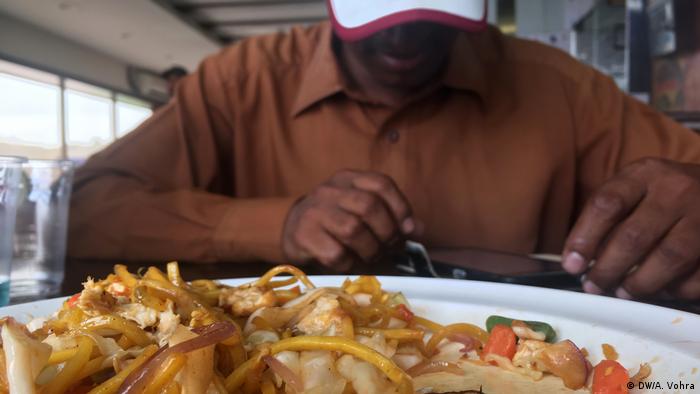 The conditions in the camps are dire, say workers DW talked to

After talking to them, DW sent an email to Qatar Rail to ask why passports were still being confiscated and why seven people were forced to share one room. DW also asked how often labor inspectors have inspected the camp.

In response, a spokesman for Qatar Rail said: "We have started an internal review to determine if there has been any breach of the law. If found to be true, we will take the necessary corrective action."

The Supreme Committee for Delivery & Legacy, responsible for workers' welfare on FIFA projects and Qatar Railways have committed to investigations based on DW's findings and promised action.

The Administrative Development, Labor and Social Affairs Ministry told DW that it has introduced a slew of changes, including better housing, increased wages and the improvement of health services. And Houtan Homayunpour, the head of the the International Labour Organization's office in Doha, told DW that "change is coming."

Despite the promises, workers continue to die. Days after DW's visit, a 23-year-old Nepalese worker was reported dead at the Al Wakrah stadium in Qatar. According to one of the main contractors, the man fell to his death while carrying out scaffolding work.

*names changed to protect their identity.