In the oil-rich Persian Gulf states, foreign workers face high risks, low wages and exploitation. The COVID-19 outbreak is a health crisis they can't afford, and authorities and employers are providing little support. 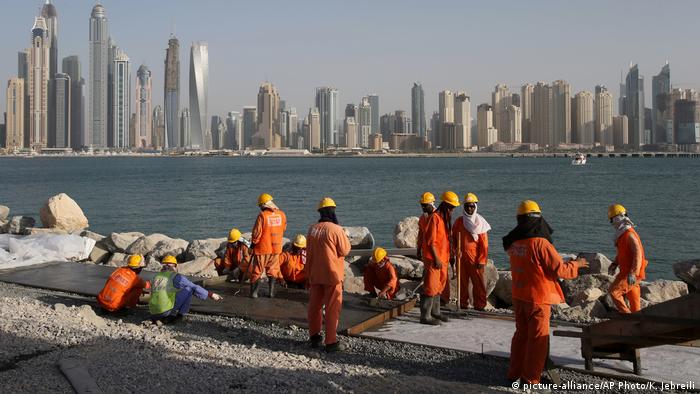 While the Saudi and Bahraini governments have promised to cover any shortfalls in their own nationals' wages, most foreign workers, who make up 95% of the workforce in some Gulf countries, have been left out.

The United Arab Emirates (UAE) has changed its law to allow companies to break the work contracts of non-nationals, restructure contracts to lower salaries and pressure workers to take unpaid leave.

The majority of foreign workers in the Persian Gulf region come from southern Asian nations, including Nepal, India and Pakistan.

"The situation is very bad. Many of my friends and people in my company have lost their jobs," said Tanveer Abbas, an electrician from Pakistan who is on temporary unpaid leave from his job at a construction company in the UAE.

Abbas' boss has told him to simply wait, but in the meantime, his family in Pakistan, who rely on money he sends home, "can't afford anything," he said.

Last week, the World Bank said global shutdowns due to the coronavirus pandemic are causing the sharpest decline in remittances in recent history. The absence of these payments is "a loss of a crucial financial lifeline for many vulnerable households," the bank said.

Other migrant workers who are now out of a job and must continue to pay rent have been left with few to no options for getting themselves home. One exception has been in Kuwait, where the government announced an amnesty for those who have overstayed their visas and offered to pay to have them travel home.

Foreign workers forced to stay where they are often face high health risks due to their living conditions. Rights groups have pointed to the dangers caused by overcrowded accommodation for foreign workers that makes social distancing impossible. This stands in stark contrast to the conditions enjoyed by local populations in the wealthy Gulf nations.

Abbas has been luckier than others; he sleeps in a five-room house, with four to a room.

Qatar's labor camps, where migrant workers live as they push ahead with construction on Qatar's 2022 World Cup facilities, have attracted particular attention. Rooms in the so-called Industrial Area of Doha, where many of them live, often house eight to 10 people at a time; there is little running water or sanitizing product. 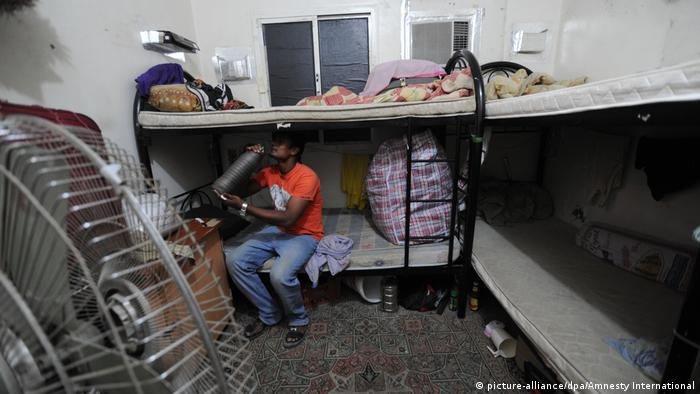 As the coronavirus outbreak spread, with the Qatari government reporting cases among some migrant workers, parts of the Industrial Area were placed under a complete lockdown; workers were only allowed out to be bused to and from work. The move drew widespread condemnation from rights groups.

In response, the Qatari government announced new measures: rooms would be limited to four people, hygiene products would be supplied, and wages and treatment for the sick would be guaranteed. Entry to work sites would also be staggered and bus transport limited to 50% capacity, according to a government website.

In addition to compounding the precarious situation of foreign workers' economic and labor conditions, the pandemic has also fueled racist discourse across the region.

In March, Kuwaiti MP Safaa al-Hashem called for the deportation of foreign workers who had overstayed their visas in order to "purify" the country from the risk they posed of transmitting the virus. Similar sentiments were spread on social media in Bahrain, according to advocacy group Migrant-Rights.org.

In both cases celebrities and academics have pushed back. On Twitter, Bahraini scholar Wafa al-Sayed railed against "abandoning a social group that has built our country and made our lifestyle more luxurious."

The coronavirus outbreak has also exacerbated the vulnerability of foreign live-in workers, such as maids and cleaners.

Such domestic workers have been placed in further danger as abusive employers use lockdowns to stop them from leaving the homes they work in, said Joanna Concepcion, head of the Filipino advocacy group Migrante International.

The pandemic has left agencies that support foreign workers in the Gulf understaffed. "There's been very limited responses in trying to assist in rescuing migrant workers who are victims of rape and physical abuse," Concepcion said.

All of these factors combined have taken such a psychological toll that suicides among foreign workers have risen. In Kuwait alone, there have been nine cases and four attempted suicides in the last four weeks, according to online outlet Al Rai.

Waiting for a miracle

Bahrain and the UAE, with 3,037 and 12,481 confirmed coronavirus cases respectively, are cautiously reopening. Qatar, with just over 13,400 cases, started slowly lifting the quarantine on its Industrial Area labor camps last week.

Human Rights Watch has called on Qatar to follow through on the worker protections it has pledged. "Now, more than ever, such promises need to be implemented, and the rights of migrant workers — who helped build Qatar's economy and cared for its families — should be protected," said Michael Page, deputy director at Human Rights Watch's Middle East section.

Despite the challenges, some migrant workers remain hopeful even as they rely on charities and religious groups to make ends meet.

"Maybe God will solve this situation soon," Abbas the electrician said. "We are still waiting."

Exploited and without adequate protection, tens of thousands of migrant workers are meeting the global spike in demand for medical gloves in Malaysia as the coronavirus pandemic drags on. But at what cost? (27.04.2020)

The restrictions around the coronavirus outbreak have made it impossible for thousands of migrant workers to come and harvest crops in Spanish fields. But that's just one of the many problems local farmers face. (15.04.2020)