Exploited and without adequate protection, tens of thousands of migrant workers are meeting the global spike in demand for medical gloves in Malaysia as the coronavirus pandemic drags on. But at what cost? 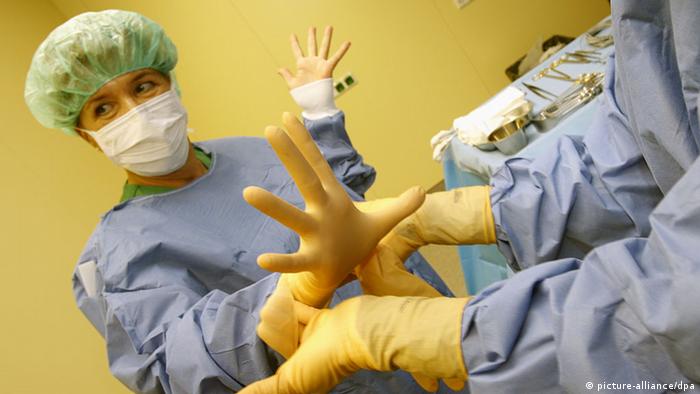 The US Embassy in Malaysia tweeted on March 27 that "The world is depending on Malaysia" in the fight against COVID-19. The embassy wrote how 65% of medical gloves used by "the great American heroes" and their counterparts worldwide were made in Malaysia.

The same week, the EU's ambassador to Malaysia urged Malaysian glove manufacturers to "get creative" to ensure 24/7 production to meet the EU's urgent demand for gloves.

Meanwhile, the British health service, the NHS, spent 75 million pounds (€88 million, $95 million) on rubber gloves in 2018, most of them sourced from Malaysia, and in March the UK government bought 88.5 million gloves from Supermax, the European arm of a Malaysian firm.

Top Glove, which makes one in five gloves globally and can produce 200 million natural and synthetic rubber gloves a day, denied the allegations and went back into full production.

Meanwhile, in January WRP got funds to pay workers after an emergency shareholder meeting and injection of cash from private equity fund TAEL Partners. This was three months after WRP imports had been banned by the US Customs and Border Protection agency (CBP) on suspicion of the firm using forced labor.

In January 2019, 2,000 of WRP's Nepali migrant workers held a three-day strike over months of unpaid wages. The government launched an investigation and the results favored the workers, but, as Malaysia-based social mobilizer and consultant Abu Hayat told New Age, many Bangladeshi migrants still face a severe food crisis due to unpaid wages.

Malaysia's 1.7 million hectares (17,000 square kilometers) of plantations, from small privately owned plots to vast estates, produce almost 20% of the world's natural rubber. The country is the world's largest exporter of natural rubber medical gloves, catheters, latex thread and condoms. Before the recent outbreak, sales orders came mainly from China, Hong Kong, Singapore and South Korea, but now they are from Europe and the US. 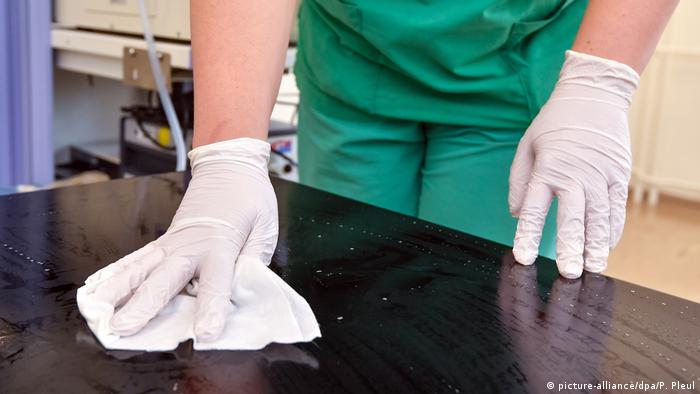 Last year, global demand for gloves was 290 billion pieces, of which 187 billion were supplied by Malaysia. Revenues in 2019 were $4.31 billion (€3.95 billion) and the Malaysian Rubber Glove Manufacturers Association estimates the figure could go as high as 240 billion pieces in 2020.

The director-general of the the Malaysian Rubber Board (MRB), Dr Zairossani Mohd Nor, said economists projected Malaysia would control 65% of the global rubber gloves market in 2020, up 3%. The overall local rubber industry has been growing 5-6% annually since the 1980s and the advent of AIDS, he said.

"Little has changed for the 30,000 foreign migrants producing the gloves," Andy Hall, an independent British migrant worker rights specialist, told DW. "Most of Germany's gloves — and the world's gloves — of course come from Malaysia and forced labor is still rife at glove companies,' said Hall.

Malaysia's economy has long relied on cheap foreign labor from poorer countries like Bangladesh, Nepal, Indonesia and Myanmar. There are an estimated 3 to 4 million migrant workers in the country. In 2018, the remittance outflow from Malaysia was almost $10 billion. According to the World Bank, from 2006 to 2016 remittances experienced a 500% increase.

Most migrant workers in the rubber sector have had to pay illegal recruitment fees to brokers — some as high as €4,500 — to get their jobs, leaving them in debt and trapped. Bangladeshi workers claim to have paid between $4,100 and $4,700 to recruitment agents in their home countries, while Nepali workers paid $1,200-1,400. The monthly minimum wage in Malaysia is $265.

Migrants often obtain high-rate loans to pay the recruitment agents. "Forced labor is a real risk for migrant workers from poorer parts of the world, who incur substantial debts to pay to get a job abroad, many times on false promises by recruiters," said Urmila Bhoola, the UN Special Rapporteur on Contemporary Slavery. "They become further dependent on the mercy of employers, who know workers paid fees worth months or years of salary, when their passports are taken away, and increasingly accept abusive conditions, threats, and punishments at workplaces."

Workers said 12-hour shifts were compulsory in the industry, with many working for weeks with no rest day and reportedly facing coercion to work when they wanted to call in sick. The migrant workers are also often housed in unhygienic dorms with up to 30 or 40 colleagues. "Social distancing isn't easy when you sleep in a room with 30 people, catch a crowded bus to a busy factory and eat lunch in a canteen," said Hall.

The work itself is also unhealthy. After the chemicals are mixed and molded, the gloves sprayed with hot water and dried in an oven. Temperatures are often above 45 degrees Celsius (113 degrees Fahrenheit), sometimes up to 70, and fires are common. Machines can reach 100 decibels, as loud as a motorbike, Hall said.

While there has been improvement at these glove factories over the past year, international monitors such as the ILO still indicate that elements of forced labor remain. In both Thailand and Malaysia, foreign workers have fewer labor rights than locals. Hall tells of how, in Sri Lanka, the world's third-largest glove producer, a local union president was attacked in 2013 by two men on a motorbike. The company then sacked the man along with ten of his union colleagues. When 281 workers went on strike in solidarity, they were all sacked, too.