No hands to harvest strawberries in the Spanish coronavirus lockdown | Business | Economy and finance news from a German perspective | DW | 15.04.2020

The restrictions around the coronavirus outbreak have made it impossible for thousands of migrant workers to come and harvest crops in Spanish fields. But that's just one of the many problems local farmers face. 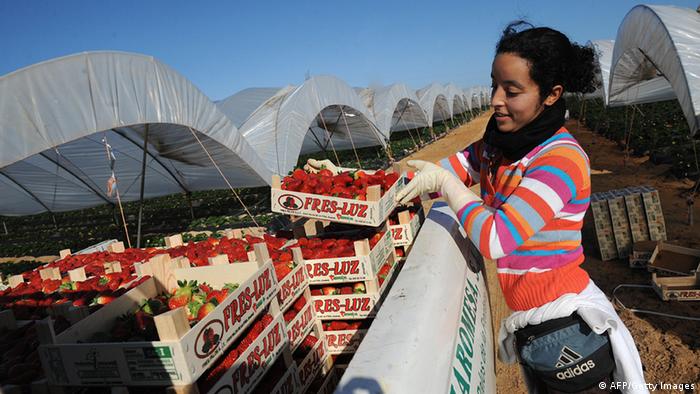 "It's a dramatic situation," Cristobal Picon, a farmer from Huelva, in Spain's southwestern corner, tells DW. This year's strawberry harvest was difficult from the outset, with farmers protesting against high production costs and low prices for their produce. But then came the coronavirus and all of Spain was put under a strict lockdown as the nation was hit hard by the COVID-19 pandemic.

A few days prior to Spanish Prime Minister Pedro Sanchez's declaring a state of emergency, Morocco had closed its borders. From one day to the next, Moroccan workers were unable to reach the Spanish farms where they work each year.

Meanwhile, laborers en route from Eastern Europe had to return to their home countries as governments all over the European Union also made the unprecedented move of closing their borders.

Strawberry farms in the province of Huelva are now short by as many as 25,000 temporeros, or temporary workers, according to the business association Interfresa. Their story is that of many other industries all over Europe affected by the measures to stop the spread of COVID-19.

There is no sign in sight that these temporary migrant workers will be allowed to come to Huelva in the coming weeks. "It is unfeasible," a provincial government official has said. Manuel Delgado Cabeza, an agricultural economics professor at the University of Seville, is convinced that "they will just not come." Farmers will have to make due with the few thousand immigrant workers already there, plus the locals.

The dark side of the red gold

Pride and shame both wear red in this Andalusian province on the border with Portugal, by the Atlantic Ocean. Huelva produces up to 97% of Spanish strawberries. This is where most of the strawberries in European supermarkets come from. The economy here does not have many other gold mines, so these exports have become a sort of brand ambassador. They are also a reason for local pride in a region with high unemployment and poverty levels.

But there's a dark side to it, too. Much of this industry's success is due to the poor conditions in which its employees work. Every year, thousands of people from countries like Romania, Bulgaria or Poland come to work in the fields. Many others, especially women, come from Morocco. Not many locals dare to say that migrants come here to steal their jobs, since most of them are not willing to work at harvesting.

"Huelva has the most flexible employment model in the history of capitalism," Delgado Cabeza says in an interview with DW. He has spent four decades studying the agricultural economics of the southern region of Andalusia. "People are hired in their countries of origin and they come here only for the amount of time when their work is needed, after that they have to go back home."

Last February, the United Nations' special rapporteur on extreme poverty and human rights, Philip Alston, said some of these migrant workers lived in shantytowns "with far worse conditions than a refugee camp, without running water, electricity or sanitation."

One and a half years ago, a German journalistic investigation disclosed how female migrant workers had been allegedly sexually abused while working in precarious conditions in the strawberry fields of Huelva. The allegations were not new, but only when they became an international story did they unleash a nationwide wave of indignation.

"When German citizens, for example, buy these strawberries, they should be aware of what comes with them," Delgado Cabeza adds. 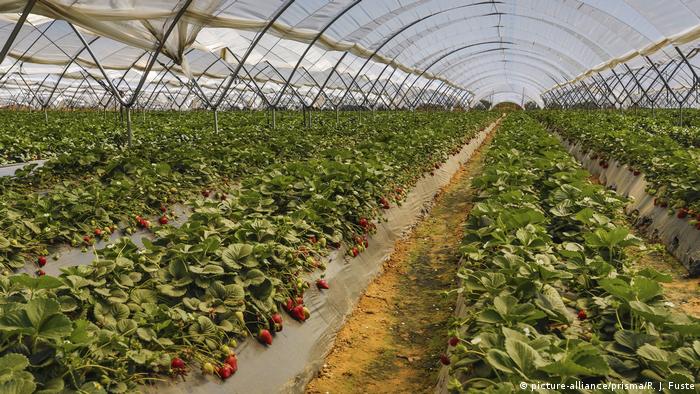 Strawberries are an important export item for Spain, but finding harvesters amid the coronovirus pandemic has proven a huge challenge

Is the government doing enough?

Local workers are also affected by the coronavirus restrictions. Initially, only two people could travel together in a car and up to three in a nine-passenger van. As a result, many of them simply cannot go to work, Interfresa tells DW.

The government has since then introduced some changes to make it easier for locals to work in the fields, such as the possibility of signing up to work without losing unemployment benefit. Is it enough?

"I do not know what to say," Natalia Aguilera, manager at Cooperativas Agroalimentarias de Huelva, tells DW. "It is a balance between health and the economy." She believes, however, that "it would be interesting that people that need to work could come, even from other countries." Especially, she adds, because there are only a handful of confirmed coronavirus cases in the province.

The Spanish Ministry of Agriculture did not reply to a request for comment.

Demand on the downturn

Things have gotten even more complicated, though. When other neighboring countries — especially Germany and the United Kingdom, two of their biggest markets — introduced similar restrictions, orders sank between 40-60%, according to Interfresa.

Additionally, the domestic demand coming from hotels, restaurants and cafeterias has vanished, while consumption habits at supermarkets have also adapted to the situation, meaning people shop less often and buy less fresh produce. "Now we are worried about the loss of our markets," Aguilera says.

Nonetheless, she underlines that "somehow the situation has led to a rebalancing" since having a smaller workforce means they are able to provide supermarkets with fewer supplies. But orders have dropped anyway, which translates into lower business income.

A report published last week by the European Parliamentary Research Service warned that some supermarket prices in Europe, particularly those of fresh food, could rise due to the lack of migrant workers. An Aldi-Nord spokesperson in Germany told DW that purchasing fresh produce "has become a greater challenge" for the supermarket chain, and he did not rule out future price increases, although the influence of the coronavirus crisis still "remains to be seen."

The high price of the lockdown

Farmers also worry about the impact on the local economy. Interfresa says the sector employs around 100,000 people per year. Farmer Cristobal Picon estimates losses of around €300-400 million ($328-438 million) in the region.

Natalia Aguilera from Cooperativas Agroalimentarias expects that they will at least be able to cover production costs. "And that is not easy," she adds. Picon worries many farmers will go bankrupt. Some of them are now placing their hopes on the raspberry and blueberry harvests, which are set to peak in the next few days. What will become of the migrant workers? "That is their problem in their country," Picon says.

Delgado Cabeza hopes the current situation forces locals to rethink their economy, since "it looks like in the coming years we will have periodic interruptions of what we consider normal and we have created a very vulnerable economic model." One that has brought success at a high cost. "We will not get out of this until we realize it hurts us deeply."

Aguilera thinks what they are going through is "a difficult situation, but not the end of the world."

Yet in light of the many issues facing the sector, some would like it to be the beginning of something different.