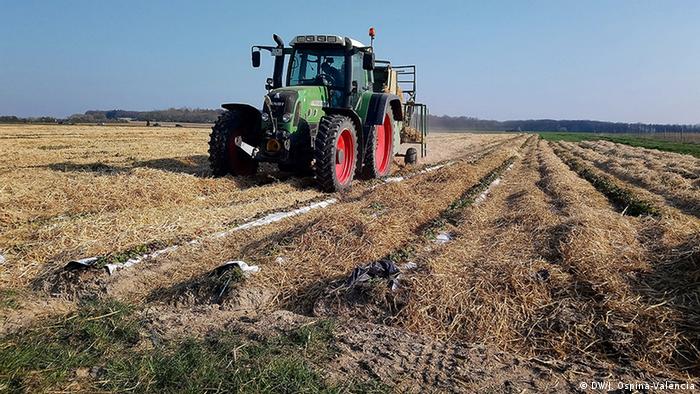 Ioan was hesitant when the phone rang. The call from Germany came after Romanian Interior Minister Ion Marcel Vela's April 4 announcement that seasonal harvest workers would be given permission to leave the country to work abroad. Vela said the government had decided to allow workers to fly directly to Germany despite concerns about the coronavirus pandemic.

In 2019, Ioan harvested asparagus in Germany for the first time. After almost three months of backbreaking work — 10 hours a day, seven days a week — he returned home with a paltry €1,800 to show for his effort. That was because more than €1,000 of his wages went to covering food, lodging and other costs in Germany.

"It was not a pleasant experience," Ioan told DW. He had worked alongside about 120 seasonal laborers — mostly Romanians and a couple of Bulgarians — who spoke almost no German and had all gotten work through brokers. The same middleman called Ioan to offer him work in Germany this year, this time with better working conditions: "They desperately need us. They are even organizing flights for us."

German farmers say they need about 300,000 seasonal workers for the 2020 harvest. But, in an effort to stop the spread of the coronavirus, Germany's government had until recently banned foreign harvesters — like most other foreigners — from entering the country. Farmers tried to fill the labor shortage by employing people already in Germany. The BMR association of machinery rings and the Food and Agriculture Ministry joined forces to create an online platform for farmers to quickly advertise jobs.

Agriculture Minister Julia Klöckner said the site quickly attracted interest, with about 16,000 Germans — including a few soccer players — signing up. Farmers, however, said employees with little or no experience would be of little help, especially when it comes to harvesting asparagus.

In April, farmers got reprieve. To save crops, Germany's government decided to allow 80,000 seasonal food harvesters to enter the country — 40,000 in April and the same number in May. The deal was sealed after Klöckner and German Interior Minister Horst Seehofer reached agreement on April 4.

"We are very happy the government has agreed to allow additional seasonal workers from Eastern Europe to enter the country," said Joachim Rukwied, president of the German Farmers' Association (DBV). He said the deal took into account the needs of DBV members, as well as members of the GLFA, Germany's umbrella organization of agricultural and forestry employer associations. "Our businesses will strictly adhere to current health guidelines set out by the Robert Koch Institute designed to halt the spread of infection," Rukwied said. "And the decision will allow us to keep working."

Now, the Lufthansa subsidiary Eurowings has announced that it will work with the DBV to fly in tens of thousands of seasonal laborers for the spring harvest. Eurowings has already set up a website to help workers get to Germany from Romania. The first flights between Düsseldorf and Cluj and Cluj and Berlin, will start Thursday.

When they arrive in Germany, laborers must live and work separate from others for 14 days, and no one is allowed to leave the farms to which they are assigned. Employers have also been forced to adapt to strict housing regulations based on suggestions from the Robert Koch Institute. Rooms are only allowed to be inhabited at half their regular capacity, and clothing and dishes must be washed hot. The government calls this "de facto on-the-job quarantine."

Back in Romania, Ioan was getting his travel documents together and packing a few things for the trip. He said his wife and children were in good shape and that the garden at their home would provide all the fruit and vegetables they needed. He said Romania's strict new state-of-emergency rules — which were recently extended — had made it impossible for him to work there. He added that he was recently laid off by his employers in Cluj.

On the phone, the middleman assured Ioan that working conditions would be better this year and that he would be earning real money. Now there are even online platforms that allow foreign workers to seek out their own employers — though most are only in German. Ioan said he wished he had learned the language.

He called the middleman back to say he would take the offer. Ioan said he'd be in Germany after Easter.

DW's editors send out a selection of the day's hard news and quality feature journalism. Sign up to receive it directly here.