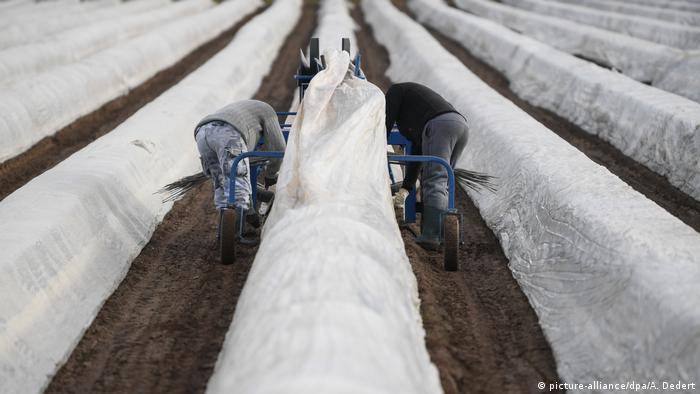 Germany's DBV farmers' federation, whose members depend each year on seasonal recruits from abroad to sow and harvest, welcomed the cabinet initiative.

The DBV as well as Germany's foodstuffs industry had warned of wastage and grocery shortages if crops such as asparagus, cabbage and fruit went unharvested.

Growers would recruit 40,000 in April and another 40,000 in May, bussing groups solely from selected airports after medical checks, and housing them in quarantine near field workplaces, according to reports in German media.

After arrival in Germany, the foreign workers would face 14 days of strict separation from other workers and would live in what government officials described as "virtual quarantine simultaneous with possibilities to work."

Seasonal workers would operate in small teams, required to use communal kitchens separately, with utensils cleaned in hot water to minimize viral risks. White asparagus is a spring favorite across Germany

The workers' living quarters will only be half-filled to ensure spacing and visitors would be prohibited. Workers who became infected would be isolated and doctors would test other members of an infected worker's team.

Beyond the 80,000 harvest workers expected to come mainly from Romania and Poland, a further 20,000 already in Germany as border controls were put in place could remain longer to work in the fields.

The government's plan also calls for 10,000 workers to be recruited from within Germany, including the currently unemployed, students, asylum-seekers and those working shortened hours due to the global COVID-19 shutdown.

Last Monday, the European Commission had urged EU countries to allow the hundreds of thousands of seasonal migrant workers who normally plant or harvest crops across the 27-nation bloc to cross borders despite national measures to contain the coronavirus.

Klöckner described the plan as a "pragmatic solution" that reconciled protection from infection while securing vegetable and fruit production.

"The harvest doesn't wait and one cannot postpone crop sowing," she said.

Strict measures to slow the spread of the coronavirus, Sars-CoV-2, had struck the population and business hard, said Seehofer, but these were necessary to interrupt the chain of infection.

"It's important to create the preconditions so that during the pandemic state and business can be kept running," said Seehofer, who during Europe's 2015 migrant crisis had clamored for Chancellor Angela Merkel to shut borders.

Workplace health and safety authorities and German customs would oversee observance of rules based on guidelines of Berlin's Robert Koch Institute (RKI), the German body responsible for studying disease control and prevention.

Across the normal year, Germany typically needs about 300,000 seasonal workers.

Extreme weather brings "extreme challenges," Germany's farmer association said while presenting their report on this year's harvest. The farmers urged the government to help bring in seasonal workers from outside the EU. (23.08.2019)