Malta has bowed to pressure and allowed 425 migrants to disembark four boats kept at sea for a month. PM Robert Abela cited a gas cylinder threat, activists' suicide bids, hunger strikes and illness for the decision. 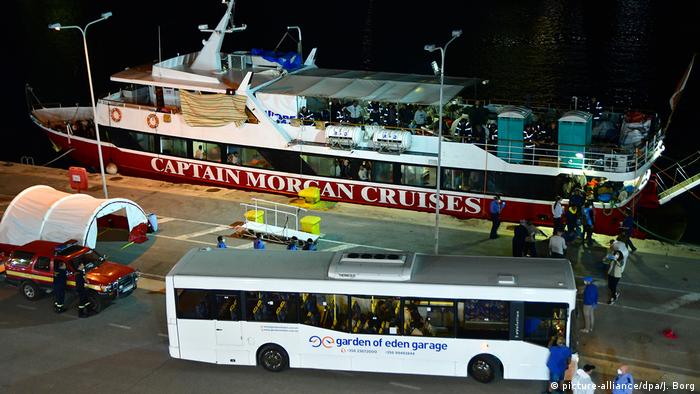 The four boats kept outside Malta's 12-mile (19-kilometer) maritime zone since April were allowed ashore on Europe's Mediterranean island nation on Saturday night into Sunday, amid differing claims on how the crisis had peaked.

Prime Minister Robert Abela claimed that migrants on the first vessel to disembark, Europa II, had grabbed knives from its galley [kitchen] and threatened to detonate a gas cylinder on board.

Crew members had urged Malta's military to help but the government late Saturday spoke of "commotions" and said it did not want to "endanger lives of both the migrants and the crew" due to absent EU "solidarity" on relocations.

Crew and security officers had been holed up on the vessel's bridge, said TVM, Malta's state broadcaster.

It was not clear immediately where the 425 migrants were then taken.

Last month, crisis hotline Alarm Phone said some occupants had gone on a hunger strike, had endured skin diseases and some had attempt suicide.

Malta's government in turn said the island's reception centers were full and insisted its harbors were closed because of the Covid-19 pandemic.

In early May, Abela said: "Hundreds of thousands of people in Libya want to cross the Mediterranean to Italy or Malta."

"We will be firm in our commitment not to open our ports," he added.

Malta, like Italy, also with Mediterranean islands, has long complained that other EU nations have not offered quick resettlement relief, leaving them with unfair burdens as migrants or rather asylum-seekers try to reach Europe.