Tunisia protesters unite for democracy ⁠— but is it enough? 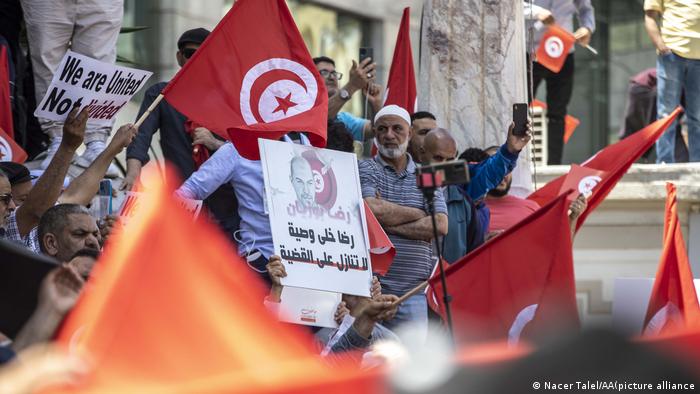 While around 2,000 protesters is not yet anywhere near the Arab Spring demonstrations, it's a strong symbol

After 10 months of authoritarian rule by Tunisia's President Kais Saied following a power grab, many in the crisis-ridden country are united in pushing for a return to democracy.

Around 2,000 people of different political affiliations took to the streets on Sunday following a call by the newly-formed alliance National Salvation Front.

While the turnout was not comparable to the massive sit-ins in 2013 when thousands of people called for democratic elections, the meaning is nevertheless significant: A growing number of people, political parties and factions are joining forces to reject the political course on Saied's watch.

Who is the opposition?

One of the key players of this new alliance is the Islamist party Ennahda, one of Saied's fiercest opponents.

"Ennahda has become part of a civil political resistance that will use all civil and peaceful means to overthrow the coup and to push for the national dialogue that the country needs," Imed Khemiri, spokesman of the Ennahda party, told DW.

For him, this means, above all, dialogue between political parties. "The president does not want a dialogue except with himself," he said.

Another major player is a group of civil activists called Citizens Against the Coup.

"Since we began our struggle 10 months ago, we were able to convince many people that what happened was a coup, which symbolizes a great gain for collective awareness," Ezzeddine Hasgui, a political activist and founding member of the movement, told DW.

What prompted the protests?

In July last year, Kais Saied, a former law professor, had suspended the country's parliament, dismissed the prime minister, and issued an emergency decree, by which he has been ruling ever since.

Saied, however, insists that his political moves are democratic and have been necessary to guide the country to a new constitution, through a referendum in July 2022.

Yet, critics doubt the referendum will take place, as preparations are stalling.

The country has been sliding from one crisis into the next. Amid the political crisis, growing domestic debt, as well as rising inflation and increasing unemployment rates, the situation has been exacerbated by the war in Ukraine. The conflict in Eastern Europe saw a shortfall of up to 60% of wheat imports in Tunisia — severely impacting food security in Tunisia.

Moreover, the initial wave of public support Saied rode due to his promises to clamp down on corruption, has been fading.

Until this week, the Tunisians had not united in calling for a return to democracy. 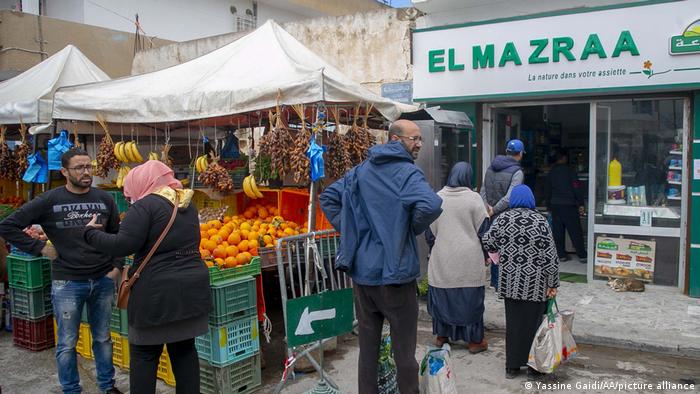 Tunisia, which imports up to 60% of its wheat, will suffer from grain shortages due to the war in Ukraine

While Sunday's turnout is seen by some as a disappointment, the organizers argue that the opposition is gaining momentum.

"Ahmed Neijb Chebbi, a leftist progressive and long-time opposition figure, has come forward with his Al-Amel Party (Hope) to call for the National Salvation Front," Alyssa Miller, a researcher who is based in Tunis for the German think tank GIGA Hamburg, told DW.

For her, Chebbi is worth watching, as "he could position himself as an important unifying force to broaden the opposition beyond Ennahda and pro-Ennahda forces."

The Ennahda party has been discredited by large portions of the population, as it has been blamed for corruption and political infighting in parliament prior to its dissolution on July 25 last year.

"In order to be successful, the anti-July 25 opposition must appeal to a broader base of political parties and civil society forces," Miller said

Therefore, she considers the latest statements by the country's influential union, the Tunisian General Labor Union (UGTT), as significant.

"In the past, the UGTT has been largely neutral or cautiously supportive of Kais Saied, and it was recently tapped by the president, along with the Tunisian League for Human Rights, to oversee the composition of a constituent assembly and to write a new constitution which would be put to a national referendum on July 25th," Miller said.

However, the two organizations have signaled they would not support Saied's process "unless it were inclusive," she added.

The inclusion of opposition voices, though, has been opposed by Saied. It's unclear whether oppositional unity will evolve into a widespread movement, but the situation has similarities to the calls for democracy in 2013.

Back then, however, the overall situation was much closer to violent clashes than it is today.

And yet, just like this time, the Tunisian Confederation of Industry, Trade and Handicrafts (UTICA), the Tunisian Human Rights League and the Tunisian Order of Lawyers were asked to be on board of a new constitutional committee — along with the UGTT.

In turn, those four groups became famous as 'The National Dialogue Quartet' . It is widely believed that they averted a civil war, and their efforts were awarded with the Nobel Peace Prize in 2015.

Despite this similarity, the country's security situation was much worse.

"Along with the assassinations of the two popular leftist politicians, Chokri Belaid and Mohammed Brahmi, the country experienced a general rise in violence committed by Islamist insurgent groups in 2013," Miller explains.

Therefore, she doubts that tensions will rise to this extent again. "If we compare the situation with Tunisia today, we can see that the security situation is very, very different," adding that many of the violent insurgent groups that operated in northwestern Tunisia in 2013 have been "slowly brought under control under subsequent governments."

But she does see — yet again — some administrative powers meant to assist in the fight against terrorism are being used to target political opponents.

For Miller, this could indicate a return to an iron fist rule. "I think it is more likely that there is a return of authoritarian control of the type that was practiced and exercised in Tunisia under Ben Ali," she said.

Kais Saied's decision raised fears about the independence of the judiciary and was sure to anger his opponents. Judicial Council head Youssef Bouzakher said the move was "illegal."

Protesters gathered in Tunis to reject President Kais Saied's rule, blaming him for returning Tunisia to a state of autocratic rule. The New Salvation Front has coalesced several parties to oppose him.