Conservative academic Kais Saied, who is poised to become Tunisia's next president, has thanked the "young people for turning a new page" in the country's history. The independent candidate won more than 70% of the vote. 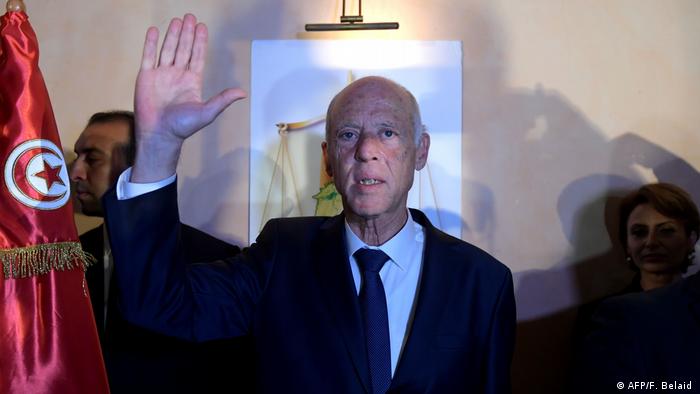 Thousands of supporters of conservative academic Kais Saied celebrated late into the night on Sunday after exit polls said he had won the Tunisian presidential runoff election by a landslide.

Official results are only expected to be announced Monday, but two polls have given him more than 70% of the vote. His rival, media mogul Nabil Karoui, was trailing by over 40 points.

Saied thanked the country's young people "for turning a new page," and vowed to try to build "a new Tunisia."

"We need to renew confidence between the people and the rulers," he said in televised comments.

Karoui has said he would decide whether to appeal the result after the electoral commission announces the official vote tally. 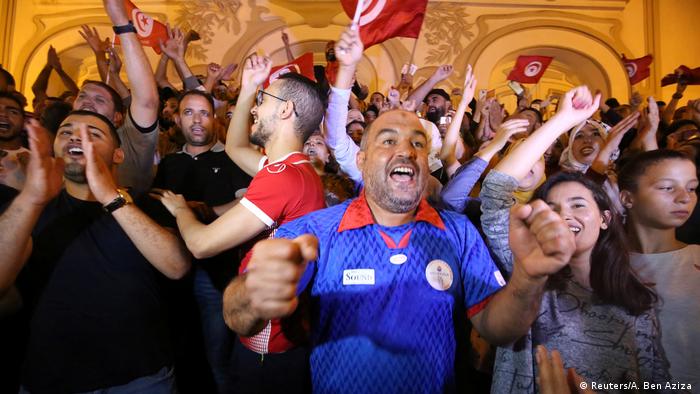 Sunday's poll was the third national election in five weeks, following the first round of the presidential vote in September and an inconclusive parliamentary election.

Turnout for the runoff was an estimated 57% — significantly higher than in the other recent elections.

Although both Saied and Karoui were seen as anti-establishment options, there were also clear differences between them.

Karoui is a 56-year-old media tycoon, who up until Wednesday had been jailed on charges of tax evasion and money laundering. Saied is a 61-year-old jurist and law professor with no political party but backed by the moderate Islamist party Ennahda.

If confirmed president, Saied will face a number of challenges, including high unemployment, inflation and public debt.

Polls have shown Tunisians are broadly dissatisfied with the political and economic situation of their country, which currently has a joblessness rate of about 15%.

The presidential vote was just the second since the country's Arab Spring revolts. Tunisia was the origin of the 2010-2011 uprising across the North African region. The protests overthrew longtime ruler Zine El Abidine Ben Ali and his autocratic government in favor of free democratic elections.

Nicknamed "Robocop" for his austere mannerism, Kais Saied is a social conservative known for his bluntness and controversial views. He has called for the criminalization of homosexuality and a sexual assault law that reprimands unmarried couples who publicly display affection. He has also argued that capital punishment must be maintained and that men and women should not inherit equally.

Saied was a constitutional law professor at the Tunis faculty of judicial and political sciences from 1999 to 2018. He launched an unorthodox election campaign during his retirement, shunning mass rallies and favoring a door-to-door campaign method.

The former business tycoon, Nabil Karoui, heads the newly founded center-left Heart of Tunisia party. He has continued to deny the allegations against him and says they are politically motivated.

While in jail, he campaigned by proxy through his wife and party. Although now a free man, he is still under investigation for fraud and banned from traveling overseas.

Karoui, also a former Colgate-Palmolive executive, launched a media agency in 2002 alongside his brother. After the Arab Spring revolution, he turned his entertainment channel, Nessma TV, into a news channel which then became one of the country's biggest private broadcasters. He and his party distributed free pasta to the poor, earning him the nickname "Nabil Macaroni."

Although he presented himself as a candidate for Tunisia's poor and spoke in Tunisian dialect during Friday's head-to-head television debate with Saied, for some Tunisians Karoui has come to embody corruption.

An imprisoned populist who owns a TV channel and a reserved law professor are the two leading candidates. The vote has been widely seen as a stress test for Tunisia's fledgling democracy. (17.09.2019)