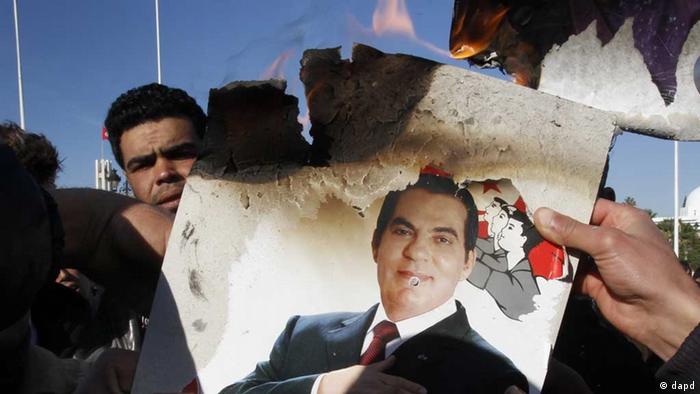 On December 17, 2010, Tunisian greengrocer Mohamed Bouazizi set fire to himself out of despair in his home town of Sidi Bouzid. Authorities had confiscated his wares, and Bouazizi was at his wit's end. Many Tunisians found themselves in a similarly dire economic situation, and after learning of Bouazizi's death, took to the streets. Tunisian police reacted with a wave of repression. But to no avail. The protest movement quickly spread across the country.

Then-President Zine el-Abidine Ben Ali, who had ruled Tunisia since 1987, initially refused to make concessions to the protesters. In a television address on January 10, 2011, he said that "these people have attacked government buildings, state institutions and innocent citizens — they are criminals and we cannot tolerate this." He added that "this unrest is being stirred up by people who are inciting our youth to revolt and are spreading lies about the government."

But the protesters refused to be intimidated. On January 13, 2011, Ben Ali finally agreed to negotiate, indicating he might introduce reforms: "I have heard your political demands, that is why I promise unfettered press freedom and the internet will no longer be censored." Ben Ali also announced he would not run for the presidency again. But it was too little, too late. The protest movement had grown too strong to be placated. One day later, Ben Ali fled to Saudi Arabia.

More than 300 individuals are said to have died in the uprising against Ben Ali — most of them at the hands of regime forces.

For decades, Ben Ali dominated Tunisian politics. He was omnipresent. His portrait hung in state offices, cafes and restaurants across the North African country. The figure 7 played a special role in the cult of his personality: Ben Ali assumed power on November 7, which is why numerous streets, squares and also the state broadcaster were named after this key date. Dialing codes were even changed from 0 to 7. Many Tunisians, meanwhile, liked to joke in private that they were stuck with their long-term president "for life."

Ben Ali was born in 1936 in the coastal town of Hammam Sousse. At an early age, he joined the anti-colonial resistance movement under the leadership of Habib Bourguiba. Ben Ali was arrested and jailed several times. Then, in 1956, France relinquished control of the country and Bourguiba became the first president of newly independent Tunisia.

Ben Ali attended a French military academy, underwent intelligence training in the United States, and quickly rose up the ranks back in Tunisia. He served as the director of Tunisia's military security department from 1964 to 1974, and established close links with the CIA. In 1985, he was appointed minister of national security. One year later, he was made interior minister. Then, in 1987, he was named prime minister. In that same year, Ben Ali toppled President Bourguiba in a bloodless coup.

Ben Ali, now in charge, announced Tunisia's constitution would be reformed and civil liberties granted. Alas, these announcements remained empty promises. Ben Ali never allowed genuine political opposition to emerge and elections were manipulated: In 1989, he supposedly garnered 99.3% of the vote; in 1994, 99.9% and five years later, 99.4%. Political opponents — in particular Islamists, but also democratic activists — were persecuted, tortured or forced into exile. Tunisia's press was censored. But the West never really took offense to any of this. Back in 2008, France's then-President Nicolas Sarkozy even lauded the country for supposedly making advances in human rights.

Enriching himself at Tunisia's expense

In the 1990s, Ben Ali endeavored to modernize the country's economy. He adhered to the neoliberal policies recommended by the World Bank and International Monetary Fund: Regulations were loosened and state-run firms were privatized. Some Western observers regarded the country as role model for economic modernization. Ben Ali, meanwhile, fostered the country's export-oriented textile sector and tourism.

It was the president’s clan and his second wife Leila Trabelsi who benefited the most from the country's privatization wave, however. They got their hands on cheap loans from state-run banks, with which they bought hotels, real estate, telephone networks and airlines. And anyone who wanted to do business in Tunisia had to guarantee the presidential clan a 10-20% share. Leila Trabelsi reportedly once spent €30,000 ($33,000) on a Dior coat in Paris. Dior then sent the bill to the Tunisian embassy, which never paid up. And when Ben Ali and Leila Trabelsi fled the country in 2011, they reportedly took 1.5 tons of gold from Tunisia's state bank.

Ben Ali was later sentenced in absentia to life imprisonment for the death of protesters during the revolution. Saudi Arabia, however, refused Tunisia's calls for his extradition. Ben Ali himself denied that he carries responsibility for the death of Tunisian protesters. Now, he has died in exile, out of reach of the Tunisian judiciary. He was 83.

Tunisian President Beji Caid Essebsi has died after being hospitalized with a severe illness. In 2014 he became the country's first democratically elected leader, following the Arab Spring. (25.07.2019)