Tunisian President Beji Caid Essebsi has died after being hospitalized with a severe illness. In 2014 he became the country's first democratically elected leader, following the Arab Spring. 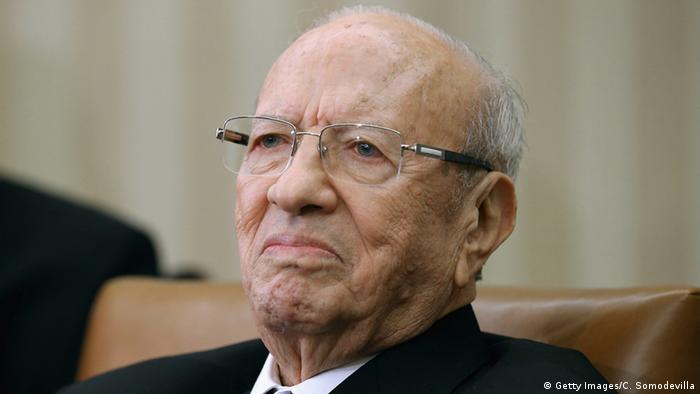 Tunisia's president, Beji Caid Essebsi, passed away Thursday at a military hospital, the North African country's presidency announced. He was 92.

Essebsi, the oldest head of state after Britain's Queen Elizabeth II, was hospitalized with a severe illness in late June and returned to intensive care on Wednesday evening at the Tunis military hospital.

In a statement, the Tunisian presidency called for unity following Essebsi's death.

"After the revolution, the president led the people to avoid confrontation and led the democratic transition," it wrote.

The country has declared seven days of national mourning for Essebsi, who led what many characterize as the only democratic success of the revolts that swept across the Arab world.

When his office this week released a video of Essebsi's meeting at the Defense Ministry on Monday, he appeared visibly frail on the film.

The speaker of parliament, Mohamed Ennaceur, has taken over as interim president, in line with the constitution, and will remain in office for 45 to 90 days while elections are organized.

The Electoral Commission announced later on Thursday that the presidential elections would be held on September 17, instead of the scheduled November 17.

Parliamentary elections are due to be held on October 9. The elections are the third set of polls in which Tunisians will be able to vote freely.

Essebsi recently announced that he wouldn't run in the presidential election, saying a younger person should lead the country.