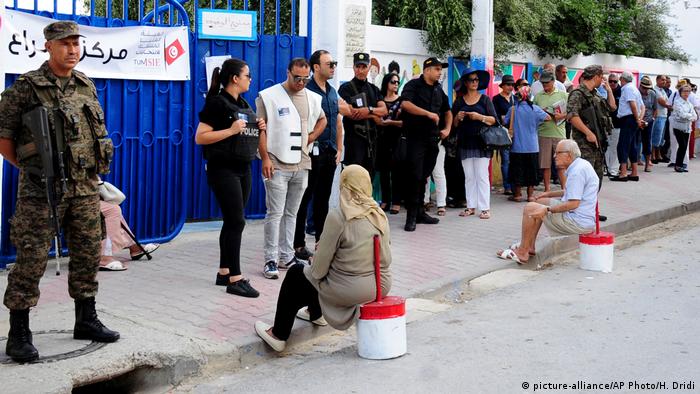 Tunisians cast ballots on Sunday in the North African country's second democratic presidential election, with a crowded field of 26 candidates vying to lead the country through high unemployment, poverty and attacks by militants.

Preliminary results are expected on Monday or Tuesday, however exit polls show a lead for Kais Saied, a 61-year-old law professor and expert on constitutional affairs who ran as an independent. If no candidate receives more than 50% of the vote, a second-round runoff must be held no later than November 3.

Turnout for the election was 45%, according to Tunisia’s election commission. "The percentage of voter participation increased in the last hours of the balloting," said commission head Nabil Baffoun.

Karoui's arrest, which his supporters say is politically motivated, has dominated the campaign in recent weeks. He also claims exit polls show him advancing to a final, run-off election.

Abdeldrim Zbidi, who served as Chahed's defense minister, ran as an independent but has received the backing of several secular parties, including Essebsi's Nidaa Tounes.

With no overwhelming front runner, the election has been viewed as a challenge for Tunisia's fledgling democracy.

Isabelle Werenfels, a researcher at the German Institute for International and Security Affairs, has called the vote a democratic "test" because "it may require accepting the victory of a polarizing candidate," such as Karoui.

While the Arab Spring protests brought violence and turmoil to Syria, Egypt, Bahrain, Yemen and Libya, Tunisia emerged as a democracy.

However, the promises of democracy have been undermined by youth unemployment of around 35%, widespread poverty and a wave of terrorist attacks that damaged the economically vital tourism industry.

All the main candidates vowed to boost the struggling economy and tackle terrorism.

Just one hour before voting stations closed at 1800 (1700 GMT/UTC), the head of the electoral commission (ISIE), Nabil Baffoun, gave one final push for youngsters to support democracy.

"Young people of Tunisia, you still have an hour to vote!" Baffoun urged.

"We must leave our homes and vote — it's a right that we gained from the 2011 revolution that cost lives," Baffoun added.

Many of the candidates expressed their happiness as they turned up at the polling stations.

Abdelfattah Mourou had a wide smile as he voted, while premier Youssef Chahed said he was "proud of this great event," after casting his own ballot.

"The world is watching. By tonight or tomorrow, Tunisia will be in good hands," he added.

More than 100,000 police and troops were deployed across the country to keep the peace for 7 million registered voters.

Tunisia's president is responsible for foreign and defense policy, while many other portfolios are handled by a prime minister chosen by parliament.

kp,cw,jsi/tj (AFP, AP, dpa, Reuters)Every evening at 1830 UTC, DW's editors send out a selection of the day's hard news and quality feature journalism. You can sign up to receive it directly here.

Souad Abderrahim dedicated her victory to "all women who have struggled" to reach senior positions. This was the first mayoral election in the Tunisian capital since the 2011 Arab Spring uprising. (03.07.2018)

Tunisia's prime minister has banned the full-face veil in all government buildings due to security concerns. It comes after a deadly double suicide bombing in Tunis in late June. (05.07.2019)