Tunisia′s opposition stands up to president′s power grab | Middle East | News and analysis of events in the Arab world | DW | 29.09.2021 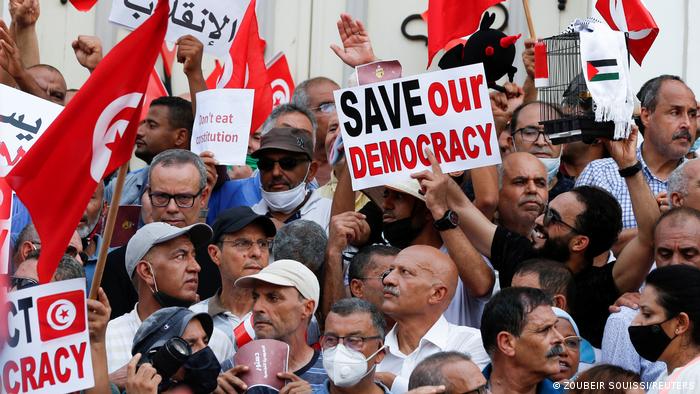 Those critical of the Tunisian president are becoming increasingly vociferous

At first, they praised him for taking such direct action to resolve Tunisia's problems. But over the past few days, President Kais Saied has come under increasing pressure from some of his former allies.

Although Saied had promised this would be temporary and that he would stay the democratic course the country had been on since 2011, he has increasingly accumulated more power for himself.

Last week, Saied tweeted his next steps. Messaging on social media, he said he would begin to make decisions unilaterally, by decree, and that he would select a new cabinet himself. He would also begin a revamp of Tunisia's hard-won 2014 Constitution via a committee he would appoint himself. Any parts of the current Constitution that went against his powers were no longer valid, he declared.

From the beginning of Saied's takeover, his critics have claimed he is acting in an unconstitutional way and that he is a potential dictator. However, his supporters have argued that his actions were necessary to deal with Tunisia's political gridlock. Many of them celebrated his takeover.

In July, the country's largest and most powerful trade union, the Tunisian General Labor Union (UGTT), was among the latter group. Back then UGTT representatives expressed confidence in Saied's actions, arguing that some sort of drastic political change was necessary.

In 2015, the UGTT, which has around a million members, was one of four Tunisian groups to share the Nobel peace prize for mediating between Islamist and secular politicians and achieving what the Nobel committee called "an alternative peaceful process … on the brink of civil war." The labor union has considerable political clout. 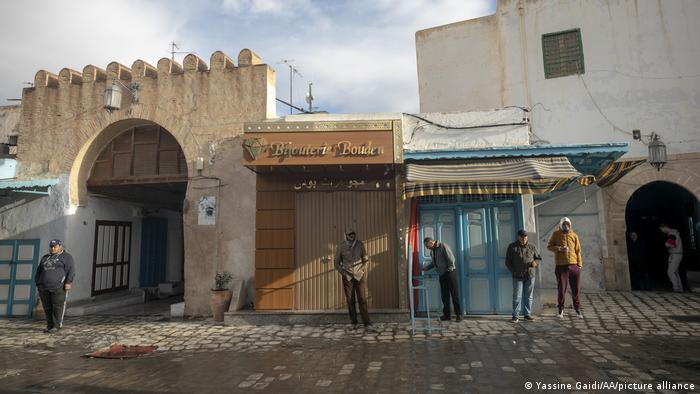 In late 2020, the UGTT called a general strike to protest political inaction

However, over the past week, the UGTT's opinions of Saied have changed. "We consider the president has lost his legitimacy by violating the Constitution," a statement from the UGTT said.

Members of the UGTT have always called for political reform, Samir Cheffi, the trade union's assistant secretary-general, told DW. And the UGTT was previously sympathetic to the president's actions because what happened in July "was a true expression of Tunisians' aspirations," he explained.

"The state of despair [among ordinary Tunisians] was overwhelming. But reform requires a participatory path. We believe that building a better Tunisia requires openness to all of the country's different forces, the ones that haven't been implicated in corruption or oppression. This is what we mean by a participatory approach," he said.

And that's what troubles the UGTT about the changes recently announced by Saied, Cheffi added. They're not participatory. Additionally, the UGTT "considers the gains made in the field of human rights, freedoms and democracy [in Tunisia] are untouchable forever."

Calling it a coup

Joining the UGTT in their condemnation were four centrist Tunisian political parties: Attayar, Al Jouhmouri, Akef and Ettakatol. Together they issued a joint statement calling for the end of what they described as a coup and describing his latest moves as "dangerous." The Attayar party was previously considered to be close to Saied.

The centrist parties have joined the country's largest political force, the moderate Islamist party Ennahda, which had held the most seats in the Tunisian parliament before Saied shut it down. The party, which some blamed for Tunisia's political gridlock, has been very critical of Saied's recent actions. 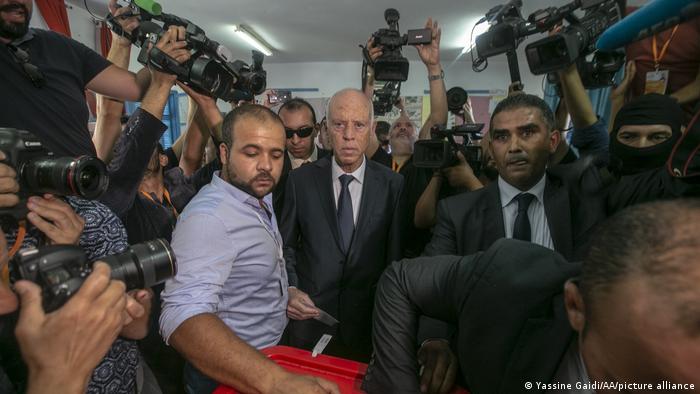 At the same time, as a result of the current crisis, over 130 members of the Ennahda party have resigned recently, claiming that the party's leadership is to blame for Saied's actions and has not taken a strong enough stand against him.

The leader of another party, Echaab, has consistently supported Saied, arguing that his leadership is required. However even that politician, Haykal Mekki, recently expressed some reservations during a radio interview. This state of emergency might go on for another six months, Mekki noted, but his party was not giving Saied "a blank check."

"Up until now the only critical voices were coming from the Islamists," Riccardo Fabiani, North Africa project director with Crisis Group, a think tank, told DW. "So the fact that the UGTT has come out publicly criticizing the president is a notable development."

On the other hand, Fabiani continued, there hasn't really been any major mobilization against Saied yet either. "We have not seen all the actors coming together, saying we need to do something now, we need to stop him."

It is also hard to know whether the growing chorus of critical voices represents the majority opinion among Tunisians, Fabiani noted. And, even if it does, it is just as difficult to know how the president's opponents would be able to stop him. "For example, would they ask the army to step in?" Fabiani asked. "We don't know what the army thinks about all this."

For the time being, most observers are forced to wait and see what happens next. "I think the big question is how do the majority of Tunisians feel?," Fabiani continued. "You can perhaps guess the answer to that by looking at how people are reacting to the recent demonstrations," he said, referring to small protests that have broken out both for and against the president. "My colleagues in Tunisia say that most of the recent protests have been met with comparative indifference," Fabiani concluded.

Over last weekend, there were protests again in a number of Tunisian cities, including the capital, Tunis. As in past weeks, some of those on the streets were opposed to Saied's latest actions, others wanted to celebrate them.

Local newspaper, La Presse, reported how Avenue Habib Bourguiba, the main street in Tunis, was split in two by protesters on Sunday. There were an estimated 2,000 people there and on one side there were those who accused the president of a coup, while on the other were demonstrators celebrating the man they said was ridding the country of "crooks."

"But who really speaks for the Tunisian people?," La Presse editorial writer, Karim Ben Saied, queried. Nobody really knows, he concluded, and the only way to really find out would be to hold an election as soon as possible.