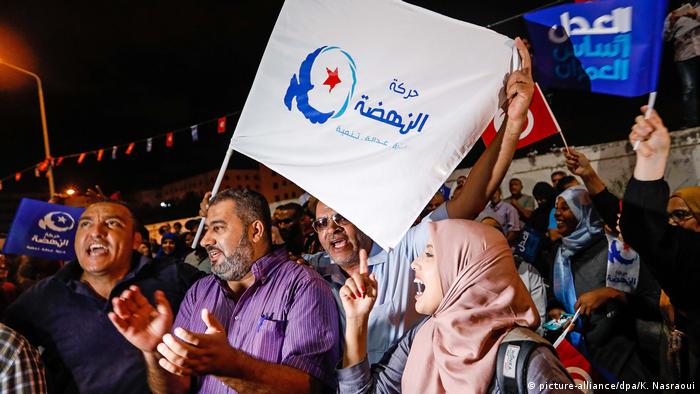 More than 100 members of Tunisia's moderate Islamist Ennahda Movement resigned on Saturday due to qualms with how their leader is responding to the country's ongoing political crisis.

The resignations come as around 20 international and Tunisian human rights organizations condemned a "power grab" by President Saied in a joint statement.

What did the Ennahda officials say?

"The current party leadership is responsible for (Ennahda's) isolation and largely for the deteriorating situation in the country," 113 Ennahda members said in their resignation statement.

They claimed wrong choices were made by Ennahda leader Rached Ghannouchi and slammed a lack of internal reforms with the party. They said party leadership has failed to counter controversial executive actions by President Kais Saied, who has suspended parliament and vowed to rule by decree.

Eight lawmakers and several former ministers were among those stepping down.

"We call on the people to take part in peaceful actions to resist dictatorship and return Tunisia to the path of democracy," he told news agency AFP.

Tunisia managed to transition to democracy after dictator Zine Abidine Ben Ali was deposed in 2011. The revolution that year sparked a series of uprisings in other Arab countries such as Egypt and Syria, in what became known as the Arab Spring.

The statement issued by rights groups said they "strongly denounce the decisions taken unilaterally by President Kais Saied, reaffirm their unwavering attachment to democratic principles and condemn the seizure of power and the lack of any form of safeguards."

Endorsers of the statement include Human Rights Watch, Amnesty International's Tunisia section and the Tunisian Network for Transitional Justice, among others.

The human rights organizations accused Saied of "implicitly abrogating the constitutional order in... a first step towards authoritarianism."

Tunisia's influential UGTT trade union on Friday also warned in a statement against "the dangers of concentrating all powers in the hands of the president." In addition, four Tunisian political parties this week claimed President Saied has lost his legitimacy.

Saied, a constitutional law scholar, was elected to office in the 2019 presidential elections. His victory was perceived as a rebuke to the country's political elite, as he is the first Tunisian leader to not have any political ties to the country's founding father, Habib Bourguiba.

Saied's extraordinary executive measures have come as the North African country grapples with an economic crisis due to high public debt and unemployment. The country has also been hit hard by the coronavirus pandemic, with Tunisia at times struggling to procure enough oxygen and vaccines.