After scrapping a key judicial watchdog and facing accusations he is moving toward authoritarian rule, President Kais Saied is under growing pressure. As public support dwindles, some analysts expect increasing unrest. Tunisia has seen growing dissent, but so far no widespread public outrage. That could soon change

The news of the dissolution of Tunisia's Superior Council of the Judiciary must have come as some surprise to its 45 magistrates on Sunday morning.

Overnight, President Kais Saied announced that the body could now "consider itself a thing of the past."

And yet, ending the work of the judicial council — created in 2016 and one of the last institutions able to act independently of the decree-ruling president — was just the latest move in a series of criticism and accusations from Saied.

In January, he had already revoked the members' financial privileges. And prior to that, the president had accused the judiciary of blocking investigations in corruption and terrorism cases, including the 2013 assassinations of two leftist political figures. The council has repeatedly rejected the accusations. 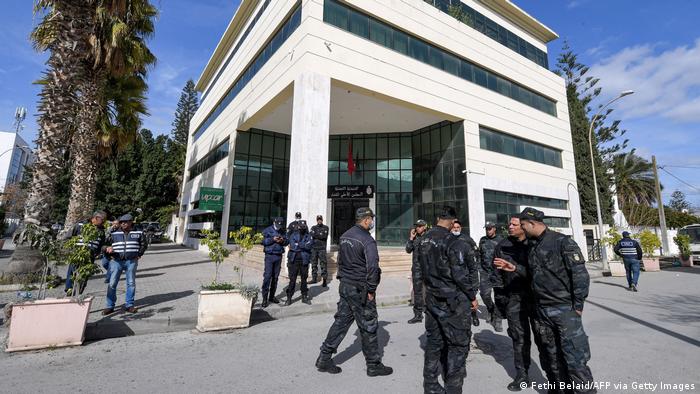 Since Monday, security forces have blocked access to the Superior Council of the Judiciary

"However, there is probably some truth in Saied's criticism, as many judges are indeed accused of dragging out proceedings or being biased," Johannes Kadura, head of the Tunisian branch of the Friedrich Ebert Foundation, told DW.

The body's president, Youssef Bouzakher, told local media that "the council will continue to carry out its tasks, and there is no legal, constitutional or even realistic legality to dissolve the council at this particular time."

However, convening the members has since become difficult. On Monday and Tuesday, judges said security forces had blocked roads near the council building and barred its doors.

Criticism of the president's move has come from both local and international bodies.

On Sunday, Tunisia's association of judges issued a statement highlighting that the decision was "a dangerous and unprecedented retreat from constitutional gains."

Ghazi Chaouachi, the leader of the opposition Democratic Party, said the president's attempt to dissolve the judiciary council is part of his "power grab."

In the US, State Department spokesman Ned Price said it was "essential that the government of Tunisia holds its commitments to respect the independence of the judiciary, as stipulated in the constitution."

In July, a decade after the uprisings that swept the Arab world and brought democracy to the country, Saied — a political independent — dismissed the parliament and the prime minister. Despite promising to maintain the rights and freedoms gained after the revolution, he has been ruling by decree since then, prompting critics to call his power grab a coup.

However, at least in the beginning, Saied was strongly supported in his actions by the general population, who hoped he would address the country's pressing problems.

'Tunisia does not deserve this'

It's fair to say Saied probably expected to enjoy widespread national support for his move to dissolve the judicial council, as the body is fairly unpopular with the public due to the accusations of corruption and delayed investigations.

He even called on his supporters to take to the streets despite an ongoing ban of demonstrations due to COVID restrictions.

"But not that many people came out, only a few hundred people were demonstrating in opposition to the Superior Council of the Judiciary. So, it does kind of indicate that there isn't a big groundswell of popular support," Anthony Dworkin, a senior policy fellow at the European Council on Foreign Relations, told DW.

This marks a steep decline in popular support within the past eight months.

Mohamed Afif Jaidi, a judge in Tunis, told DW that "we left the framework of the rule of law to a de facto state. This began with the president's obstruction of the legislative authority and a personal interpretation of the constitution, then expanding his executive powers at the expense of the prime minister."

In September, Saied appointed former geology professor Najla Bouden Ramadhane as the Arab world's first female prime minister. Since then, however, the 63-year-old has primarily become known for being the extended arm of the president.

Tunisians have become increasingly critical of developments in the country, including university student Ahmed Troudi. "Kais Saied brought Tunisia back to the pre-revolution stage. Saied abolished the constitution and gathered powers in his hands," he said.

Speaking with DW in Tunis, he added that "mistakes occurred during the democratic transition, but this does not justify the abolition of democracy and the monopoly of the authorities. Tunisia does not deserve this."

Ezzeddine Hazgui, an independent political activist and spokesperson for the group Citizens Against the Coup, said "the president's mistakes have increased, he has open confrontations with most institutions. This will increase people's awareness of his danger to the country."

It's a view shared by Dworkin. "People who initially saw him as a savior are apparently growing more disenchanted because they're not seeing any tangible results in the economy or their standards of living," he said. "At the same time, there is neither apparently any broad sense of public outrage at the steps he's taking against democracy in the country."

The coming months will show in which direction public opinion will tip.

So far, Saied's plans for 2022 includes constitutional reform via a committee that he will appoint, a referendum on the new constitution in the summer and an election in December.

However, he has yet to address pressing problems, like the ongoing COVID-19 pandemic and the country's unprecedented economic downturn and high levels of unemployment.

"It is high time for him to find sources of financing," Kadura of the Friedrich Ebert Foundation told DW.

For this, Saied will probably have no alternative but to comply with the reform demands of the International Monetary Fund.

"If that doesn't happen, I'd give it a few months before protests increase, and then there could be chaos," said Kadura, adding that without funding, the military — along with the president's strongest allies in the Interior Ministry — will not continue to endlessly support Saied.

However, the president isn't known for easily accepting public criticism against him, and Dworkin wouldn't rule out a drastic reaction.

"He has shown every sign so far of being quite intolerant of criticism or dissent," he said. "It could be that he would give a green light for a more repressive approach from the Interior Ministry forces. And that, I'm afraid, is the most likely sequence of events."

Tarak Guizani contributed to this report from Tunis