Trump′s ′antifa′ accusations spark debate in Germany, the movement′s birthplace | Germany| News and in-depth reporting from Berlin and beyond | DW | 03.06.2020 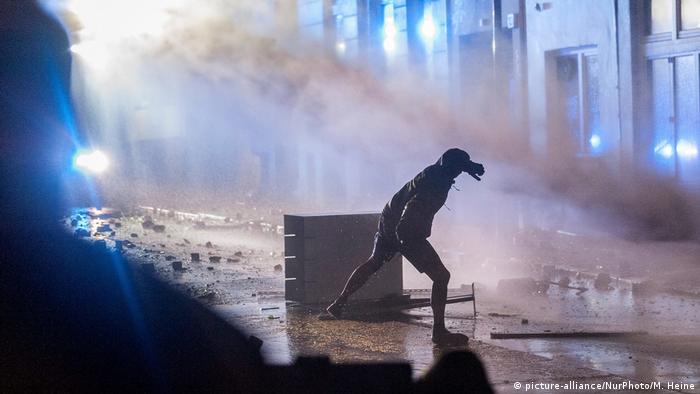 Quite a few people, not least the President of the United States, seem a little confused as to precisely what "antifa" is. Unlike many of the gaps in Donald Trump's knowledge, there are some reasonable historical justifications for this particular confusion.

In Germany, politicians and the public have been wrestling with the term for around a century now – without coming any closer to an uncontested definition.

What the word means is simple enough in German. Antifa is short for antifaschistisch, or anti-fascist. In the most literal sense, one might hope this label could apply to almost all modern German people and politicians. But does antifa refer to all those opposed to fascism, or does it refer only to black-clad anarchists and leftists staring down German police in the streets? The last large-scale German confrontation involving antifa protesters was in Hamburg at the 2017 G20 summit, with one famous scene from those demonstrations pictured above.

The word anitfa's true meaning has been complex in Germany ever since the Stalinist Communist Party of Germany (KPD) adopted the phrase and the distinctive two-flag logo for the 1932 election campaign. They had been pressing for cross-party "antifaschistische Aktion" (anti-fascist action) since the early 1920s.

The KPD portrayed themselves as the only truly "anti-fascist" party in Weimar Germany's last free election, which Adolf Hitler's NSDAP would not win outright but which nevertheless handed them the keys to power. The inability of the KPD, the Social Democrats and other democratic forces to work together, despite securing more combined votes than the NSDAP, famously helped enable Hitler to take control of Germany. Before long, the Nazis would systematically dismantle and outlaw both the largest left-of-center parties. 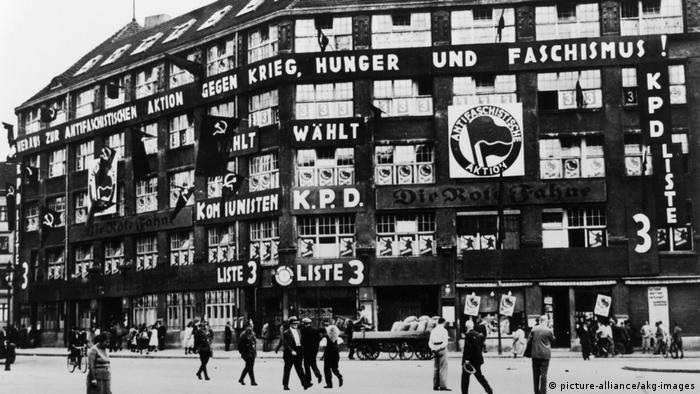 1932: The earliest iteration of the "antifaschistische Aktion" logo and flag on the Karl-Liebknecht-Haus in Berlin, the HQ of the KPD, the Communist Party of Germany. Despite undergoing some redesigns since, there's no disputing its provenance.

Many of the leading lights of Germany's interwar KPD would go on to rule communist East Germany (the GDR) during the Cold War. East Germany's ruling party, the SED, would use "anti-fascist" almost as a synonym for socialist when talking about their government. Even Bernd Langer, author of a sympathetic history of the antifa movement in Germany, notes that anti-capitalism was always understood as a core component of the movement among its more fervent supporters.

In early Cold War West Germany, the movement lost steam, but would start to recover in traditionally left-leaning cities like Hamburg and Berlin in the 1970s and 80s. The main roots were in the squatter scene and the left-leaning student movement calling themselves the "extra-parliamentary opposition." Since reunification, it has picked up pace again, also gaining a boost from more affiliation with modern causes like the anti-globalization movement or climate protests. 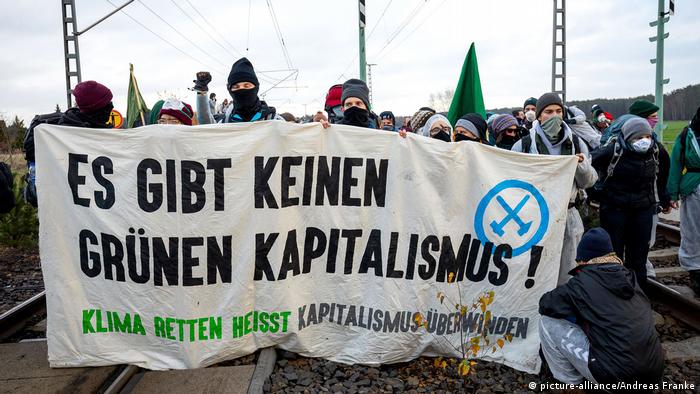 'There is no green capitalism! Saving the climate means toppling capitalism,' this placard reads. This 2019 protest at a coal mine in Lausitz predates the coronavirus outbreak, those wearing masks are seeking only to obscure their faces.

To think of a single movement in any typical sense is misleading. Many far-left, autonomous groups identify to a greater or lesser extent with the antifa label, often also embracing anarchism and non-political means of opposition and protest. For instance, modern-day German groups identifying as antifa include anti-Zionists, much to the consternation of rival factions who argue this is inexcusable given Germany's history. 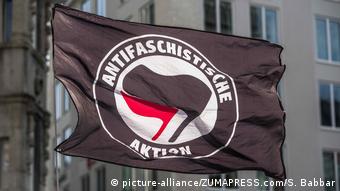 There are many versions of the antifa logo

To give an idea of the extent of the division, antifa groups can't even truly agree on the shape of the distinctive logo. The KPD's original in the 1930s was two red (socialist) flags, blowing to the right, with the flagpoles on the left. Most now show the flags blowing to the left. And probably the most common version now makes the lower flag black, not red, as a nod to the anarchist element of the movement as well as the socialist side. Some prefer making the larger flag and the border area black, with a smaller red flag below. Consensus really isn't the movement's strongest suit.

Germany's internal intelligence agency, the Bundesverfassungsschutz, describes the antifa movement as the "main field of agitation" for autonomous leftist groups. It notes that some adherents also support "militant actions, which are primarily aimed at political opponents, especially actual or supposed 'nazis.' This can often result in considerable damage to property, but also sometimes to individuals."

The turnout and audiences at demonstrations or events organized by antifa groups often has a great deal to do with the subject matter. More uncontroversial protests might attract sympathetic participants who wouldn't necessarily define themselves as anarchist, or indeed as far-left. Often German antifa groups enjoy their best turnouts when organizing counter-protests against far-right demonstrators. These events can draw in people from almost all walks of life. 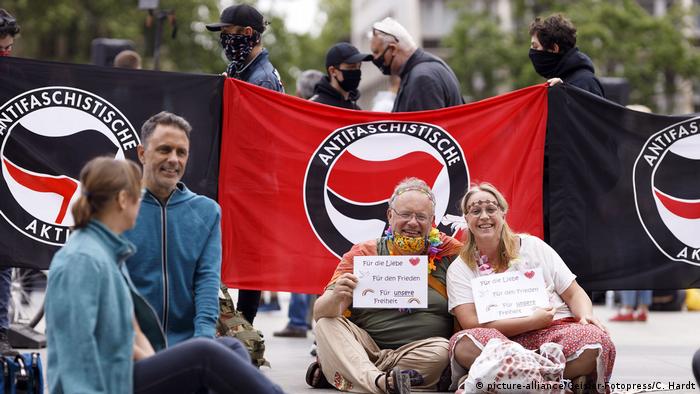 'Around 100 years old and Antifa. Obviously?'

Donald Trump's bids to reclassify the US' far newer and equally disparate antifa groups as terrorists have prompted political debate in Germany before, but not to quite the extent seen this week.

While several others in the SPD followed this online template, politicians of other stripes criticized Esken sharply.

Paul Ziemiak, general secretary of the CDU, highlighted the more contentious side of antifa in his response: "Against fascism, and for democracy and human rights. Without violence. Obviously, for me. It's sad that the chairwoman of the SPD lacks the strength to differentiate."

The youth organization of Angela Merkel's CDU/CSU alliance, the Junge Union (founded in 1947), arguably delivered the most creative response, writing: "73 and appalled."

However, Green party politician Konstantin von Notz pointed out the ambiguity of such a debate, by taking one of the Christian Democrats' most famously conservative names in vain in a response to the Junge Union.

"Even [Interior Minister Horst] Seehofer has already described himself in the parliamentary internal affairs committee as an anti-fascist. As is right and proper. What you are writing is either a bit dim or historical revisionism, or possibly both."

Esken's later response to the ensuing criticism brought the debate neatly full circle. "Antifa is not an organization. Anti-fascism is a point of view which all democrats should obviously support."

Even Germany's Duden dictionary ducks this ambiguity. Its online edition defines "Antifaschismus" as "the entirety of the movements and ideologies, which oppose fascism and national socialism." Search for simply "Antifa," however, and its online portal doesn't really provide a definition. It describes it only as an abbreviation either for "Antifaschismus" or for "Antifaschistische Aktion." And most people in Germany, antifa or not, would probably agree that there's a profound difference between the two.

The Day with Michael Okwu: Tokyo Games get underway

The Day with Brent Goff: In the Line of Fire