Germany's government has commented on the ongoing protests in the United States, saying societies around the world need to address racism, and that Berlin believes in the strength of US democracy in overcoming unrest. 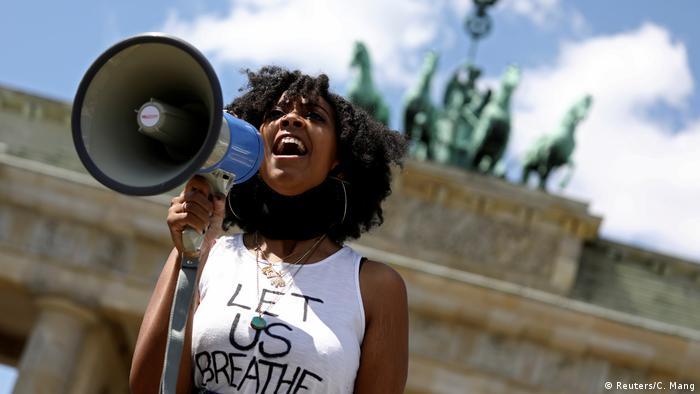 As widespread protests continued in dozens of US cities over the police killing of George Floyd, an unarmed black man, a German government spokesperson on Wednesday said Germany was "shocked" by the "horrific and avoidable" death, adding that societies around the world need to do more to address racism.

"Racism is certainly not an American problem, rather a problem in many societies, and I am sure that there is also racism in Germany," the spokesman for German Chancellor Angela Merkel, Steffen Seibert, told a press conference in Berlin.

"Every society, including ours, is called upon to continually work against this," he added.

On May 25, George Floyd was killed after a confrontation with police in the northern city of Minneapolis, Minnesota, during which an officer kneeled on his neck for several minutes.

The officer has since been charged with murder, and the incident has sparked violent clashes in multiple cities between police and protesters, who have taken to the streets to call for an end to police brutality and racism.

Seibert said the German government is closely following the ongoing unrest in the US with "sympathy" and hopes that violence will end soon, as Germany has a close, long-standing relationship with the US.

He added that Germany was confident that the democratic values in the US and the "rule of law" would prevail.

"America is a strong democracy," Seibert said, adding that there is a vocal and pluralistic debate in US media about racism, police brutality, and the ensuing protests.

"It goes without us saying that there is a heated debate over everything that is happening now."

Opinion: Police violence in Brazil is not just Bolsonaro's fault 27.05.2022

The death of a black man in a police car in Brazil has sparked huge protests. Police violence and racism need to become top election campaign issues if things are going to change, writes DW’s Astrid Prange de Oliveira.