Outrage over US racism resonates in Africa: Gambians want to kneel with black Americans, Zimbabweans are tackling the Trump administration, and South Africa is reflecting on its own police brutality. 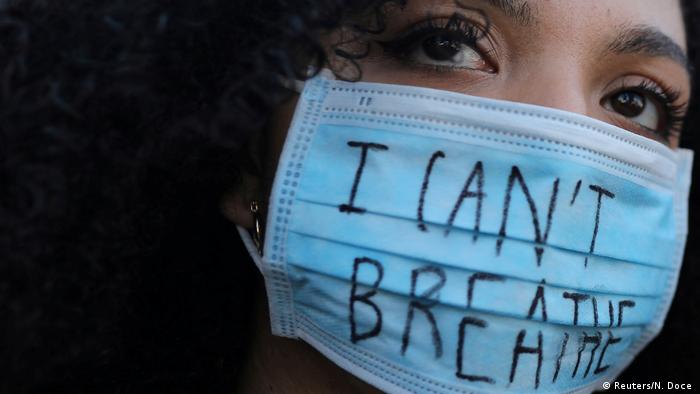 "We stand with our kith and kin in America in these difficult and trying times, and we hope that the unfortunate and tragic death of George Floyd will inspire a lasting change in how America confronts head-on the problems of hate and racism," President Nana Akufo-Addo said.

People born in Ghana make up one of the biggest groups of Africans in the US.

"Ghana's first president, Dr. Kwame Nkrumah, said, 'Freedom is not something that one people can bestow on another as a gift. They claim it as their own and none can keep it from them' #BLM," the Addison sisters who run a chocolate company in Accra tweeted.

Human rights activists are organizing a protest outside the US Embassy in the capital, Banjul,to take place next week. Alieu Bah plans to be among the hundreds who will take a knee in silence.

"I'm participating to extend solidarity and to make all understand that we are all in the same struggle. Blackness is our common denominator. We must all come together to fight for a better world for all of us," Bah told DW.

The government of the Gambia is seeking clarity over the shooting of a Gambian citizen in Atlanta, Georgia, after a car chase with police. The victim has been named as Momodou Lamin Sisay, the son of a Gambian diplomat.

Sisay is alleged to have opened fire on police before he was shot. A police officer involved in his death is reportedly under investigation.

The usually outspoken President Yoweri Museveni has not commented on the developments in the US, but citizens of the East African country have generously shared their views and condolences on the death of George Floyd. Eight-year-old musician Felista made a special tribute.

"I believe the protests are justified but the violence is too much. Burning police cars, attacking policemen and beating them up — I don't believe in that. The protests should continue, the violence should stop," Lubowa Francis told DW.

A row between the southern African country and the United States erupted after President Donald Trump's national security advisor Robert O'Brien accused Zimbabwe, along with China, of using social media to stoke unrest in the US.

The government of Zimbabwe rejected the allegation, which came as US Ambassador Brian A. Nicols criticized not only the US but Zimbabwe too in a statement on George Floyd.

"Both America's and Zimbabwe's constitutions enshrine the right to free speech and peaceful protest... Yet, peaceful protesters Joanna Mamombe, Cecilia Chimbiri, and Netsai Marova were arrested abducted," he wrote. The US diplomat also called for justice for three government critics who disappeared under the Mugabe regime.

"Essentially, we hope it is a storm in a teacup," political analyst Takura Zhangazha told DW. "There is no way practically speaking Zimbabwe would have been involved in either influencing or accelerating any social media commentary on the riots against police brutality and racial oppression in the United States."

Zimbabwe is subject to US sanctions.

Citizens and politicians of the country where racism was once legislated and violently enforced have condemned the latest salvo of police brutality in the US.

The killing of George Floyd also sparked wider public debate over the killing of citizens by police and soldiers during the COVID-19 lockdown.

In reply to a tweet by Julius Malema, the leader of the Economic Freedom Fighters, one of his followers asked: "Our leaders are so quick to pledge their support to foreign countries when we have problems at our doorstep and those foreign countries aren't so vocal about our domestic issues!"

Petrus Miggels died after he was assaulted by police on the day South Africa's COVID-19 lockdown came into effect. Collins Khosa was allegedly beaten to death by soldiers in Johannesburg in the days that followed. Several other citizens in the country and elsewhere across Africa have since suffered similar fates.

Omar Wally (in Banjul), Alex Gitta (in Kampala) and Privilege Musvanhiri (in Harare) contributed to this report.

US protests as they happened: Demonstrators defied curfews across the country

Protests were being held outside the White House, in New York and many major cities. Meanwhile, the EU said the killing of George Floyd was an "abuse of power." Read about how the protests unfolded here. (03.06.2020)

The wave of protests in American cities after the death of George Floyd shouldn't come as a surprise. Despite the two-term presidency of Barack Obama, the US is still shaped by racism, says Miodrag Soric. (02.06.2020)

Is the coronavirus killing press freedom in Africa?

As Africa remains on COVID-19 lockdown, journalists across the continent report having their rights violated by security forces. Cases of physical violence are on the rise. Is coronavirus killing press freedom in Africa? (08.04.2020)

In this interview with "The 77 Percent", musician-turned-opposition leader Bobi Wine explains why the African youth are the drivers of political change and his hope for the future.