The wave of protests in American cities after the death of George Floyd shouldn't come as a surprise. Despite the two-term presidency of Barack Obama, the US is still shaped by racism, says Miodrag Soric. 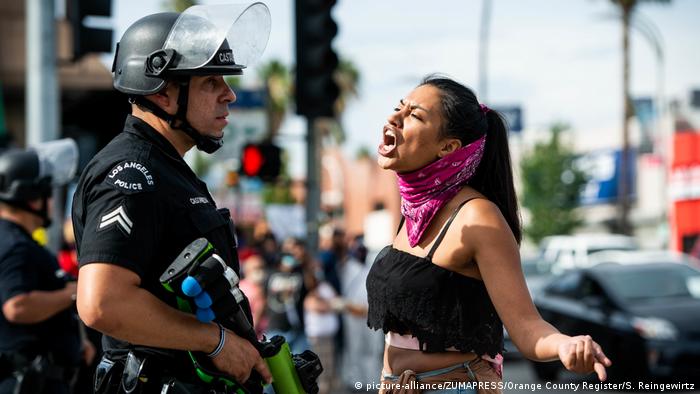 "A riot is the language of the unheard": More than half a century ago, civil rights leader Martin Luther King Jr. explained why black people take to the streets in the United States.

It's horrifying to see how little has changed since then. Once more, thousands are demonstrating against racism and police brutality. And once more, they have little hope that anything will change.

Despite the protests, most black people will continue to miss out on their share of US prosperity, and go on earning less than white people. Many will still lack the chance to better themselves, and they will still be forced to send their children to inadequate schools. They will still be less likely to be covered by health insurance, have a lower life expectancy and they will be more likely to end up in prison, and for longer sentences. All of this simply because they're not white.

On paper, every American citizen is equal before the law. But in reality, US police stop people on the street simply because of their appearance, even when they're not seen as suspects. And if they make a brutal mistake during such an arrest, as in the case of George Floyd, they often deny it. To make matters worse, the local district attorney's office is often complicit in such cover-up attempts.

In the US, local authorities are not monitored by a functioning, independent body. There are too many lawbreakers sitting in police cars pretending to be guardians of the law, and too many white people who have simply tolerated the abhorrent deeds committed by these officers. King was speaking about the majority of Americans when he said: "He who accepts evil without protesting against it is really cooperating with it."

But it's not enough to just protest against evil; it must be stopped. The first black US president, Barack Obama, tried to do so but ultimately failed. During his term in office, a policeman in Ferguson, Missouri killed Michael Brown, an unarmed 18-year-old black man, with eight shots, triggering nationwide protests.

And it was also during Obama's presidency that the black New Yorker Eric Garner, taken in a chokehold by a police officer, forced out the words "I can't breathe" before his death. A week ago, George Floyd gasped out those same last words as an officer pressed his neck to the ground with his knee for almost nine minutes.

Helpless in the face of everyday racism

US presidents may command the world's biggest army, but they remain helpless in the face of the everyday racism perpetuated by their compatriots. Of course, they should at least be able to condemn these injustices and show compassion for the victims of police brutality, if only to avoid fueling further rage and emotion.

But, as was to be expected, President Donald Trump has failed dismally even in this respect, showing about as much empathy as a meteorite crashing into a field of flowers. Trump only has eyes for his reelection, and believes he can curry favor among white voters with his military rhetoric. This strategy might indeed pay off in November, which reflects poorly on the US.

What happened to George Floyd is unfortunately not an isolated case; there have been thousands of similar incidents. Prejudice against blacks is harbored not just by police officers, district attorneys and judges, but also by teachers and employers. These protests are directed against this everyday racism.

But because it's so much a part of daily life in the US, it remains difficult to combat. For years, human rights activists have been calling for improved training for US police officers. For decades, they've been calling for independent monitoring of the work done by police and district attorneys, and for stricter weapons laws. But so far, little has happened.

However, much as one might sympathize with the cause of the protesters, it still must be said that violence leads nowhere. It can't be defended, let alone justified. And acts of violence just give more fodder to the prejudices held by many white people.

So what's left? As Martin Luther King Jr. said: "We must accept finite disappointment, but never lose infinite hope." Admittedly, however, that will be of little comfort to the family of George Floyd.

Every day, DW editors send out a selection of the day's news and quality feature journalism. Sign up to receive it here.

Florida, Carolinas count the cost of Hurricane Ian 38m ago