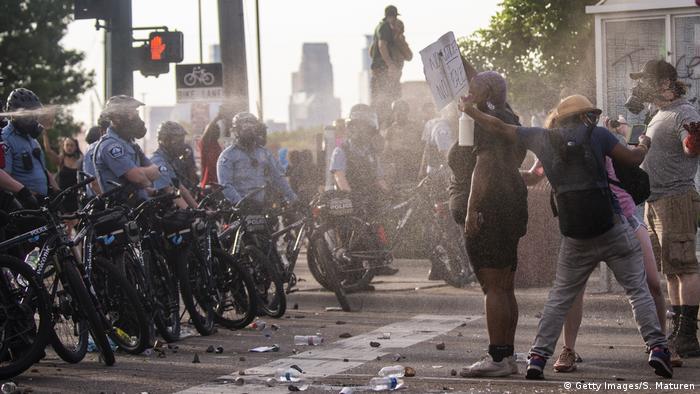 UN Human Rights chief Michelle Bachelet on Thursday condemned the death of a man at the hands of police, urging US authorities to take "serious action" to stop the killings of unarmed African Americans.

On Monday, 46-year-old restaurant worker George Floyd was handcuffed and placed on the ground by police officers outside of a store, when one of them pressed his knee on Floyd's neck for more than five uninterrupted minutes.

The moment was caught on video by a bystander, as a crowd gathered on the scene. In the video, Floyd is seen gasping for air and saying "I can't breathe," until he loses consciousness. He was then taken to a hospital and later declared dead.

All four police officers involved in the incident have been fired; an investigation is pending.

"This is the latest in a long line of killings of unarmed African Americans by US police officers and members of the public," Bachelet said, listing of several other high-profile cases of African American deaths at the hands of police and vigilantes.

"The US authorities must take serious action to stop such killings, and to ensure justice is done when they do occur. Procedures must change, prevention systems must be put in place, and above all police officers who resort to excessive use of force should be charged and convicted for the crimes committed," she said. "The role that entrenched and pervasive racial discrimination plays in such deaths must also be fully examined, properly recognized and dealt with."

Floyd's death has led to a growing national outcry on social media and on the streets, with two consecutive days of protests in Minneapolis including some looting and fires, with police using tear gas to disperse the crowd.

Political figures from both parties have also expressed their dismay over the man's death. President Donald Trump said on Wednesday that he had asked the FBI to "expedite" an investigation that had already begun.

Read more:  Erica Garner: 'These cops are still killing us'

US Attorney for Minnesota Erica MacDonald said in a joint statement with FBI officer-in-charge Rainer Drolshagen that the investigation into the case was now a "top priority."

"The federal investigation will determine whether the actions by the involved former Minneapolis Police Department officers violated federal law," the statement said. Local police have also apologized to Floyd's loved ones.

"I am absolutely sorry for the pain, devastation and the trauma that Mr. Floyd's death has left on his family, his loved ones and our community," Minneapolis Police Chief Medaria Arradondo said on Thursday.

State and federal officials will probe the district attorneys' handling of the case in the fatal shooting of the unarmed jogger. Two men were not charged until a recently released video led to public outcry. (13.05.2020)

The firing comes five years after Eric Garner died during an altercation with New York Police officers. Garner's dying words, "I can't breathe," became a rallying cry to protest police violence in the US. (20.08.2019)