Protests and anger in Ferguson | World | Breaking news and perspectives from around the globe | DW | 18.08.2014

Protests and anger in Ferguson

Ferguson remains in turmoil after a police officer shot and killed an unarmed black teenager more than a week ago. DW has a chronology of events. 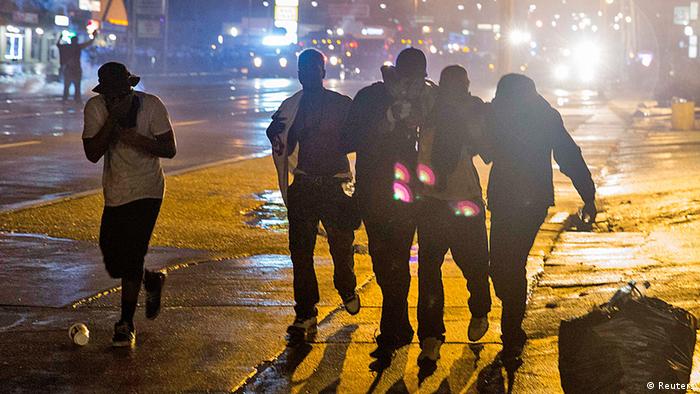 August 9, 2014: Eighteen-year-old Michael Brown is shot around noon by a policeman in Ferguson, a suburb of St. Louis, Missouri. At first, there are conflicting statements about the circumstances of the deadly shots. According to the police, Brown tried to steal cigars from a convenience store and was acting "aggressively" before he was shot. A witness told journalists a different story: Brown, he said, was on his way to his grandmother's house and when he was shot at, he raised his hands. Like most of Ferguson's residents, Brown was African American.

August 10, 2014: Police hold a news conference in the morning. St. Louis County Police Chief Jon Belmar says Michael Brown first pushed the police officer who shot at him into the squad car, and "attacked" him there. A first shot went off in the car, without hitting anyone, and the lethal shots were fired outside of the squad car. Additional reporters' questions concerning the course of events remain unanswered.

In the afternoon, people gather near the crime scene in Michael Brown's memory. Some pray, others protest peacefully against the police. That evening and night, the protests turn violent and surrounding stores are looted. Shots are fired at a police helicopter. 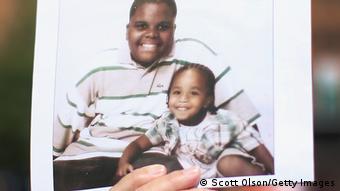 Michael, seen here with his sister

August 11, 2014: Cleanup efforts get underway after a night of violence. In the afternoon, Michael Brown's parents urge people to stay calm. But in the evening and overnight, there are more protests, violence and lootings. For the first time, the police use tear gas.

August 12, 2014: The police refuse to identify the name of the officer who shot Brown. US President Barack Obama calls on the people of Ferguson to remain calm and offers condolences to Brown's family. This is the third night of violent protests, tear gas and armored vehicles.

August 13, 2014: During the day, people in Ferguson protest peacefully. The public criticizes the police force's menacing behaviour. Violence erupts again in the evening hours and again, police use tear gas and stun grenades. 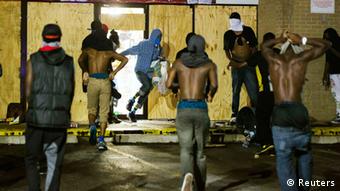 Police use force to stop looting

August 14, 2014: President Obama calls for "peace and quiet" in Ferguson. Missouri Governor Jay Nixon transfers leadership of the police operation to the Missouri State Highway Patrol. The mission is headed by Ronald Jonson, an African American from Ferguson. In the early evening hours, people gather for a peaceful protest against police violence at St. Louis' iconic Gateway Arch, Michael Brown's family among them. The night in Ferguson remains quiet.

August 15, 2014: In the morning, the police identify the man who shot Brown as six-year police veteran Darren Wilson, a white police officer with a clean record. That night, there are peaceful protests, while at the same time, the looting continues. Looters and demonstrators clash. The police are present, but reserved.

August 17, 2014: An expert opinion commissioned by Michael Brown's parents shows that Brown was hit by six bullets - two in the head and four in his right arm, all of them from the front. That evening, rioting starts even before the beginning of the nightly curfew. Individual demonstrators hurl Molotov cocktails at the police. Police claim shots are fired in the crowd. The police use tear gas to disperse demonstrators.

Missouri Governor Jay Nixon has declared a state of emergency in the town of Ferguson. The move comes after tensions boiled over to violent protests over the police shooting of the unarmed teenager Michael Brown. (16.08.2014)

'It's a problem everywhere'

After the shooting of a black teenager in Ferguson, Missouri, days of protests have followed. The president of the St. Louis branch of civil rights group NAACP tells DW that racial tensions require a national solution. (14.08.2014)

Michael Brown's death is tragic and only the latest example that the US, like most nations, is far from being a post-racial society. Solutions are hard to come by, but two steps are essential, says DW's Michael Knigge. (14.08.2014)