Robert Mugabe, who served as prime minister of Zimbabwe from 1980 to 1987 and then as president from 1987 to 2017, has died at age 95, the current president, Emmerson Mnangagwa, announced on Friday.

Mugabe, who dominated Zimbabwe's politics for nearly 40 years, was a controversial figure whose supporters considered him as a hero who helped free Zimbabwe from British colonialism, but whose detractors accused him of economic mismanagement, corruption and crimes against humanity.

Among other things, he was heavily implicated in a campaign known as Gukurahundi in the 1980s in which an estimated 20,000 dissidents were killed.

His term as presidency ended amid chaos after he was first placed under house arrest by the Zimbabwean army on November 15, 2017, before being sacked as leader of the ZANU-PF party and threatened with impeachment if he did not resign. An announcement that he had resigned was released on November 21, 2017, although Mugabe himself subsequently seemed to deny the fact.

His ouster, which had been preceded by large street demonstrations for his removal, was greeted with celebrations across the country. Many in Zimbabwe were angered by the effects of a rapidly deteriorating economy, widely considered to be related to the seizures of white-owned farms from around 2000. The seizures, which led to Mugabe being shunned by the larger international community, were meant to redistribute land to poor blacks, but it often ended in the hands of Mugabe's relatives and cronies.

Mugabe himself often blamed the economic problems on Western sanctions imposed over the intimidation of his political opponents and repression of press freedom.

The human rights violations, election manipulation and restrictions on the press that were prevalent under Mugabe's rule eventually led to his being subject to travel bans from the US and the EU.

His later disgrace overshadowed the international praise heaped on him in his first years in power, during which he called for racial reconciliation and for improved education and health services for the black majority. The initial euphoria even led to his being knighted by Queen Elizabeth II in 1994, but the honorary  knighthood was withdrawn in 2008.

Among the controversies surrounding Mugabe was the often enormous cost of his birthday parties in February each year, estimated in later years at between €453,000 ($500,000) and €906,000. At one such event in 2015, there were reports of elephants, buffalo and other wild animals being slaughtered for the feast.

The political ambitions of his second wife and former secretary, Grace, who was sometimes called "Gucci Grace" or "disGrace" for her predilection for expensive consumer goods, also played a role in Mugabe's downfall. Her faction within the ruling party eventually lost out to supporters of Mnangagwa, who enjoyed strong ties to the military.

Mugabe had been undergoing treatment in Singapore for an undisclosed illness since April. Mnangagwa said in August that Mugabe had been hospitalized but was recovering.
Read more: Activists say 'new Zimbabwe' resembles Robert Mugabe's 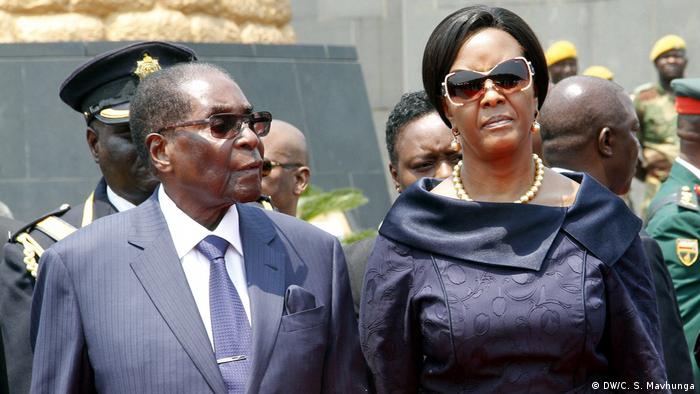 Mugabe's wife Grace has been a divisive figure

Leaderships of several countries have sent condolences. to Zimbabwe on the death of Mugabe.

"Words cannot the magnitude of the loss as former President Mugabe was an elder statesman, a freedom fighter and a pan-Africanist who played a major role in shaping the interests of the African continent," Kenyatta said in a statement.

The Chinese Foreign Ministry called Mugabe an "outstanding national liberation movement leader and politician" who had promoted "China-Zimbabwe and China-Africa friendship and cooperation."

South Africa's President Cyril Ramaphosa described Mugabe as a "champion of Africa's cause against colonialism" and said Zimbabwe under his rule was an inspiration that "built in us the hope that one day South Africa, too, would be free."

But the United Kingdom, Zimbabwe's former colonial leader, was anything but fulsome in its condolences.

"We express our condolences to those who mourn Robert Mugabe's death. However, Zimbabweans suffered for too long as a result of Mugabe's autocratic rule," the Foreign Office said in a statement, expressing the hope that the country could "continue to be set on a more democratic and prosperous path."