The US leader said he could tax one of France's key exports over a new digital tax on internet giants Google and Amazon. "I've always said American wine is better than French wine," said Trump, who doesn't drink alcohol. 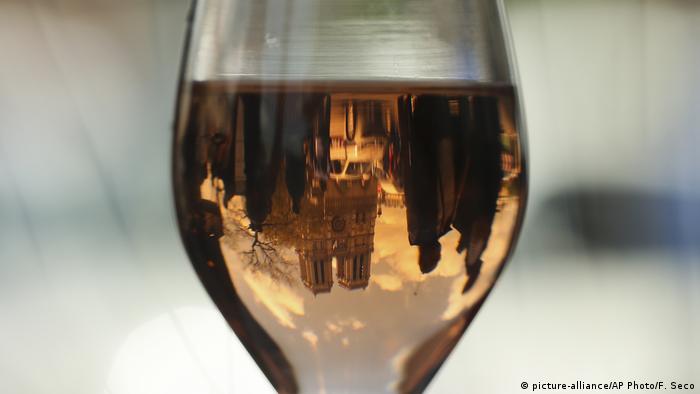 US President Donald Trump has vowed to retaliate against France's planned digital tax, threatening to increase tariffs on the country's iconic drink.

Later in the Oval Office, Trump explained that the US may impose a tax on French wine, but other options are being considered as well.

Trump, a famous teetotaler, also explained his comment about preferring American wine, saying: "I don't drink wine. I just like the way they look."

The US is the largest export market for French wine. In 2018, the US made up nearly a quarter of all French wine exports, amounting to €3.2 billion ($3.6 billion).

Macron's office said the French president discussed the need for "a broad international agreement" on a digital tax in a phone call with Trump on Friday.

The issue will also be a topic of discussion at the upcoming G7 summit, to be held in France in August.

French Economy Minister Bruno Le Maire also indicated that Paris was not planning on backing down from its move to levy taxes on tech giants, despite the threat against France's second-largest export.

"We want to reach an agreement within the G7 and the OECD. In the meantime, France will implement its national decisions," Le Maire said.

The French Parliament recently passed a law that would impose a tax on digital companies if their French revenue exceeds €25 million ($27 million) and if global sales are over €750 million.

Although the law does not specifically target US companies, the revenue threshold means tech giants like Amazon, Google, Apple and Facebook would be affected.

The move is aimed at stopping multinational companies from avoiding taxes by setting up headquarters in low-tax European Union countries.

Other EU countries, including Spain, Austria and Britain, have also announced plans for similar digital taxes.

Just days after reaching a truce over trade with China, the US government on Monday increased pressure on Europe in a long-running dispute over aircraft subsidies. (02.07.2019)

The French government is fining the tech giants millions over data that tracks users' activity. They've given the companies three months to comply or face further fines.

US tech giants — such as Amazon, Google and Facebook — pay minimal taxes abroad, despite making billions in profits. African user countries no longer want to miss out on the revenue and are discussing digital taxes.