Trump opponents rally for 'Women's March' across the US

Protesters demanded an end to Donald Trump's presidency and honored late liberal icon Ruth Bader Ginsburg at hundreds of marches around the US. Meanwhile, Trump continued his campaign push with a rally in Michigan. 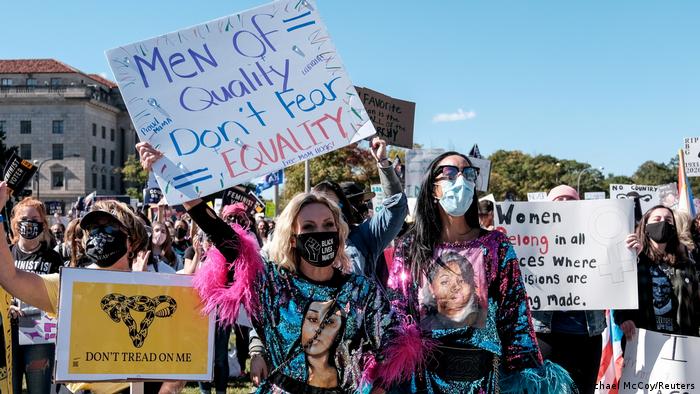 Organizers said more than 100,000 people took part in over 400 marches, dubbed the Women's March, from New York to Los Angeles.

The rallies, which were inspired by the first Women's March in Washington the day after Trump was inaugurated in 2017, also honored former Supreme Court Justice Ruth Bader Ginsburg. The liberal icon for women's rights died on September 18.

Several demonstrators were angry that Republicans appeared ready to confirm Barrett's selection to the Supreme Court so close to the November 3 election. Republicans previously refused to hear former President Barack Obama's Supreme Court nominee more than six months before the 2016 election. A vote on Barrett's consideration for the court is set to occur on Thursday.

If Barrett is confirmed to the court, the top judicial body will have a 6-3 conservative majority, raising fears that Supreme Court would withdraw legal support for abortion.

In a New York rally, protester Yvonne Shackleton told AFP that "it's really important to be here and try to encourage people to vote out Trump and his misogynistic policies, especially now, with COVID, when a lot of people are isolated."

The city saw five separate marches, including a small gathering in Brooklyn, the borough where Justice Ginsburg grew up.

In Washington, DC, protesters marched from the White House to the Capitol building and Supreme Court. A small counter-protest took place, in favor of Barrett. 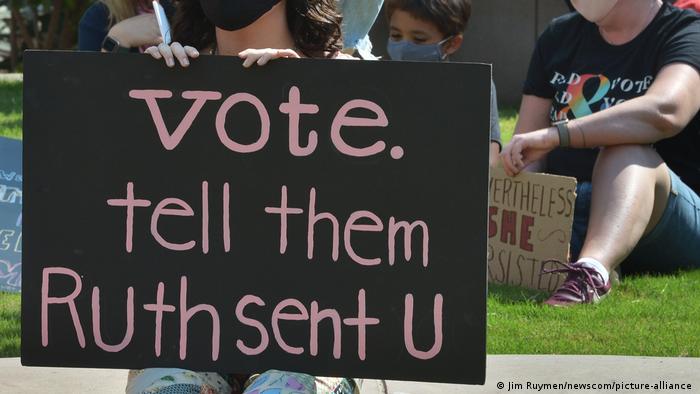 Most protesters in the Women's March wore masks in order to prevent the potential spread of the coronavirus in the midst of the pandemic. Several wore pink hats that were reminiscent of the first Women's March in 2017.

Trump's support from women has fallen considerably. The president has fallen behind his Democratic opponent, Joe Biden, by 23 points among likely women voters according to a recent Washington Post/ABC News poll.

Trump: 'lock them all up'

Trump traveled to the battleground state of Michigan on Saturday to try to win over voters. During the rally, he told attendees "you've got to get your governor to open up your state" to tremendous cheers and applause. Attendees then chanted "lock her up," reprising the 2016 chant against then-Democratic opponent Hillary Clinton. This time it was against Michigan governor Gretchen Whitmer. Trump responded with "lock them all up."

Social distancing was not enforced at the rally and many, including Trump, who was previously hospitalized with the coronavirus, did not wear masks.

Trump downplayed the alleged plot to kidnap Whitmer during the rally at Muskegon County Airport in western Michigan. Whitmer responded to the "lock her up" chant by tweeting "This is exactly the rhetoric that has put me, my family, and other government officials’ lives in danger while we try to save the lives of our fellow Americans. It needs to stop."

Several polls have favored former vice president Biden to win Michigan's 16 electoral votes in the upcoming election. Trump then traveled to Wisconsin, another tight race, and ended Saturday in Nevada.

Senate Republicans are moving forward with Amy Coney Barrett's Supreme Court nomination, in the hopes that she'll be confirmed by the end of the month. Democrats have decried what they say is an "illegitimate" process.

Whether voters in the United States choose Donald Trump or Joe Biden has depended on how they see the response to the coronavirus pandemic, views on abortion and a handful of other key issues.