A militia group had planned to storm the state capitol in Lansing and put Governor Gretchen Whitmer "on trial for treason." Later, the plan shifted to kidnapping Whitmer at her vacation home. 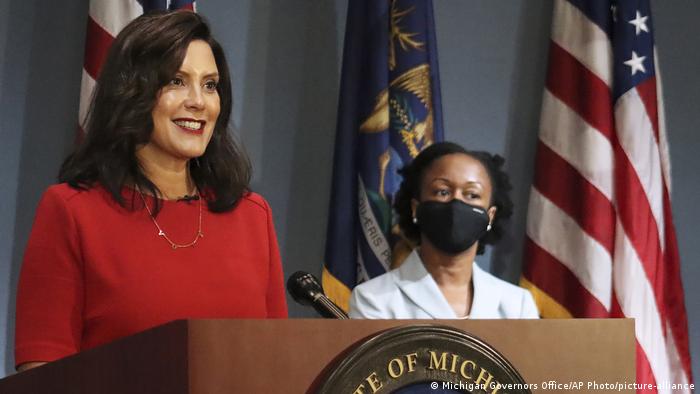 The US Federal Bureau of Investigations (FBI) says it has stopped a plot to kidnap Michigan Governor Gretchen Whitmer. A criminal complaint unsealed in federal court Thursday said that four of the six men the FBI claims were involved in the plot had planned to "make a payment on explosives and exchange tactical gear" on Wednesday and carry out their plan before Election Day on November 3.

The FBI affidavit claims the men — five from Michigan and one from Delaware — had originally conspired to storm the Michigan State Capitol in Lansing with 200 armed militia members to take over the state government and capture the governor with the intention of putting her "on trial for treason."

Read more: Who are the Proud Boys?

Eventually, they settled on a plan to abduct her at her northern Michigan vacation home and take her to neighboring Wisconsin.

'All good things must come to an end'

One of the men involved in the group, which the FBI was able to infiltrate, said Whitmer, a Democrat, "has no checks and balances at all. She has uncontrolled power right now. All good things must come to an end."

Read more:  US election: 'COVID changed nothing' for Trump supporters and opponents in Ohio

The FBI affidavit says the men conducted two reconnaissance runs to the governor's vacation home at Birch Lake as well as purchasing an 800,000-volt Taser and night vision goggles as part of the plot.

The FBI says two members of the group "agreed to unite others in their cause and take violent action against multiple state governments that they believe are violating the US Constitution."

Hours after the arrests, Whitmer said US President Donald Trump's rhetoric has given extremists a "rallying cry," citing Trump's failure to explicitly denounce right-wing extremist groups during the presidential debate.

During the debate, Trump told a far-right extremist group known as the "proud boys" to "stand back and stand by."

Digging through the US presidential debate debacle

Digging through the US presidential debate debacle

The criminal complaint gave no indication that the men arrested were inspired by Trump. On Wednesday, White House Press Secretary Kayleigh McEnany said Trump has "continually condemned white supremacists and all forms of hate.

Republican lawmakers as well as Trump and his supporters have accused Whitmer of overstepping her office's powers in her strict approach to the coronavirus pandemic.

Whitmer has justified her actions by pointing to the governor's emergency powers, which came into effect when she declared a state of emergency in March. While Republicans initially agreed to extend those powers until April 30, they have fought hard since to undermine her authority by employing legislative tricks and court injunctions in an effort to stymie her.

On October 3, the Michigan Supreme Court handed down a 4-3 majority decision stating Whitmer did not have the authority to extend the state of emergency after April 30. The governor objected to court's the decision and its "interpretation of the state constitution," saying that, "Right now, every state in the union and the federal government have some form of declared emergency."

The Michigan State Capitol has repeatedly been the scene of boisterous protests in which attendees have entered the building — accompanied by heavily armed far-right and militia members — to threaten lawmakers.