Friday morning, 9:30 a.m., on the side of a busy road in Indianapolis, Indiana. It's hard to have a conversation over the noise of the trucks driving by, but the college students setting up shop on the sidewalk have come prepared. Each of them has brought a large, hand-held sign so they can advocate for their cause without having to say a word.

The men and women in their early 20s are protesting in front of a Planned Parenthood clinic on this sunny morning, trying to convince women not to get abortions. Their signs display messages like "Let's Love Little Lives" and "Pro-Life is Pro-Woman." One especially graphic sign shows a picture of an aborted fetus.

Christine Manring, 21, has been demonstrating in front of abortion clinics since she was "this tall," she explains with a laugh, holding a hand low above the ground. It's been somewhat of a family tradition for her and her nine siblings. Their parents used to take them to protests roughly once a month; Manring has been handing out flyers since she was 14.

She is part of the nationwide high school and college anti-abortion group Students for Life and a nursing student at Indiana University-Purdue University in Indianapolis. She's passionate about the cause.

"Abortion is one of the largest genocides in human history," Manring tells DW. "I think everyone should want to stop it."

Evangelicals are crucial for Trump

Christine Manring and many of her fellow protesters are evangelicals, a subset of Protestant Christians who hold extremely conservative political views. White evangelicals make up roughly 15% of the population, but they vote in large numbers. According to National Election Pool exit polls, they made up more than a quarter of all  voters in the 2016 US presidential election — and the overwhelming majority of them voted Republican. 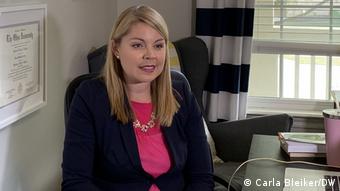 Laura Wilson, of the University of Indianapolis, says evangelicals are an essential part of Trump's base

Donald Trump, who is on his third marriage and has publicly talked about groping women, might not seem like the kind of figure who would align with evangelical values.

But Trump is what many of his supporters call the "most pro-life" president ever, and for the large number of evangelicals who are so-called single-issue voters, that's what matters. They appreciate that Trump was the first president to speak in person at the annual anti-abortion March for Life in 2020.

Most evangelicals believe the Bible should be interpreted literally, and 63% read Scripture at least once a week, according to the Pew Research Center. They believe that human life begins at fertilization and, citing one of the Ten Commandments — "Thou shalt not kill" — they categorically reject abortion. That's why, for most evangelicals, supporting a candidate who is anything other than strictly anti-abortion is out of the question.

"There's a lot about Donald Trump that I don't like, that I don't agree with," says Manring. But she still plans to vote for him this year because of his stance on abortion — and the president is counting on the support of people like her.

"The evangelical vote is critical to Donald Trump's reelection," says Laura Wilson, an assistant professor of political science at the University of Indianapolis. "Conservative Christians are an essential part of his base and they focus on abortion."

For conservatives in Indiana, Trump's vice president, Mike Pence, is an added bonus. Pence, an evangelical himself, was born and raised in Columbus, Indiana, and was governor of the state from 2013 to 2016. During his time as governor he signed several bills intended to restrict abortions.

Abortion is a 'violent and intrusive procedure,' say opponents

It's not just evangelicals who are staunchly opposed to abortion. Mary Carmen Zakrajsek joined Manring in the protest outside Planned Parenthood, holding a sign in English and Spanish that reads "Pray to end abortion." She is a devout Catholic and the president of the Students for Life group at Marian University, a private Roman Catholic university in Indianapolis.

Zakrajsek, a political science student, calls abortion a "violent and intrusive procedure" and the "killing of an innocent human being prior to his or her birth."

Studies have shown that when abortions are outlawed, there is a higher health risk for women who are then forced to undergo the procedure in a nonsterile environment, or have it performed by someone who is not trained for the procedure. But that information doesn't sway Zakrajsek, who believes that abortion should be illegal no matter what.

"Just because people seek something out when it's illegal doesn't mean we should keep it legalized," she says. "Just because some people use opioids, it doesn't mean I should supply them with needles and safe spaces to do that."

Manring agrees, adding that abortion needs to be made illegal at all costs. "Yes, women are going to get more hurt with illegal abortions, but there will be fewer abortions overall," she claims.

The primary aim of the Students for Life members who have gathered in front of Planned Parenthood this morning is to prevent women from ending their pregnancies.

Manring and the organization's state coordinator for Indiana, Emily Stumpo, agree that the clinic is a hard place for them to get women to talk. The activists aren't allowed to go beyond the driveway, and the actual Planned Parenthood building and parking lot are far from the road.

At one point during the morning, a driver stops and rolls down her window to listen to what Manring has to say. 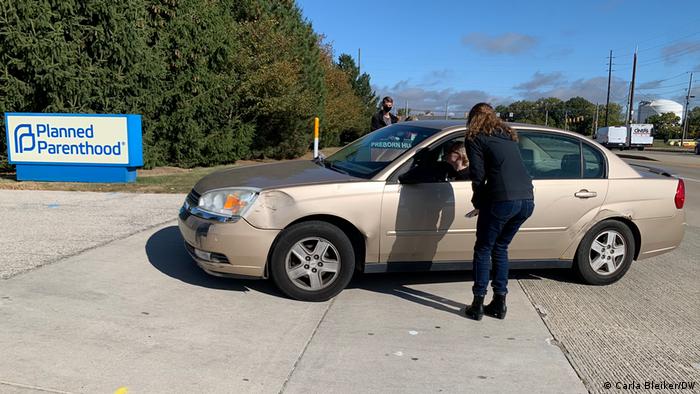 "She was just picking up a friend and wasn't sure what the friend was here for," Manring says after the brief conversation. Just to be safe, she gives the woman a handful of flyers. One shows a baby's developmental stages, along with photos of "children alive today because their parents changed their minds about abortion!" as the flyer points out. Another talks about a spiritual "abortion recovery" program for women who decide to go through with the procedure. "We also care about women after they have had abortions," says Manring.

She says protesting is easier at other locations, like a Planned Parenthood clinic in Detroit, where her brother is also an active member of the anti-abortion movement. There, activists engage in what they call "sidewalk counseling," where they approach women who want to enter the clinic after they park their cars on the street. The activists are able to follow the women from their cars all the way to the door of the clinic, speaking with them and sharing their information.

It's exactly for situations like this that Planned Parenthood has introduced "escorts." These volunteers accompany women from their cars to the clinic on what is a difficult day for many, so the activists are prevented from talking to the women and are forced to leave them in peace. To make sure a woman coming to the clinic recognizes them, the Planned Parenthood escorts wear pink vests.

But, as Manring and Stumpo make clear, savvy anti-abortion activists have found a way around this tactic, with "sidewalk counselors" at escort-protected clinics also starting to wear pink vests. This way, they hope to catch the women on their walk to the clinic and convince them not to go through with terminating their pregnancy.

"People say if a woman chooses abortion, if it's her choice, it's best for her," says Manring. "But I think that's a lie. I think it's harming women."

The church business in Ghana is booming and with it a new group of leaders has emerged: the prophets. Ghanaian church leaders are powerful. The promise of wealth and good health has filled their coffers with money.