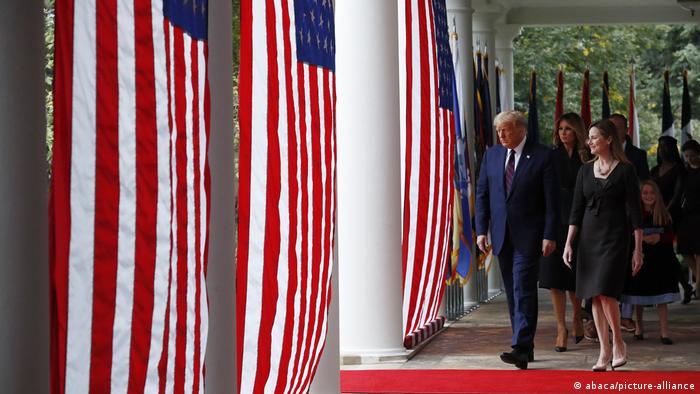 The designated successor to Ruth Bader Ginsburg could hardly be more different from her predecessor. Justice Ginsburg, who died earlier this month after a long battle with cancer, had dedicated her life to fight for gender equality. She fought hard for the right to abortion and opposed the discrimination of minorities, while demanding health care for all and battling for a humane immigration policy.

Donald Trump's nomination to replace Ginsburg at the Supreme Court — 48-year-old Amy Coney Barrett — in so many ways stands for the polar opposite. The devout Catholic is against abortion, supports Trump's restrictive immigration policy and has fought against health care for all Americans.

The decision to pick her for the top court is one that is likely to further fuel the explosive mood in the country, which is more divided than at any time since the Civil War, a conflict that at its end saw the liberation of slaves.

Wait until after the election

Trump's decision to fill the court's vacant seat before the November 3 presidential election is a controversial one, regardless of the person he nominated.

Many have suggested that such a swift decision is unnecessary so close to the upcoming nationwide vote and that the electorate should decide from which camp the next chief justice should come. A stance that the democratic presidential candidate Joe Biden also takes.

Biden himself has yet to propose a candidate, though he has held out the prospect of naming a liberal African-American woman who would fight against discrimination, be in favor of stricter weapons laws, as well as seek wider health care availability and the right to abortion — thus continuing the legacy of Ruth Bader Ginsburg.

It is very likely, however, that the Republican-dominated Senate will confirm Barrett's nomination before the next presidential term begins. This will mean that Trump will have appointed three Supreme Court judges in his first term in office and will have moved the top court significantly to the right.

Due to the age structure of the judges in office, it is quite possible that Trump will be able to appoint a fourth judge in the event he should gain a second term after November's poll. An argument that could well convince undecided Republicans to vote for Trump once again.

For if this were to succeed, the Supreme Court would be firmly in Republican hands, with no possibility for future presidents or lawmakers to change this. There are quite a few who are prepared to accept four more years of Donald Trump in the White House in order to lock down the court in favor of the Republicans for decades to come.

This article has been adapted from German by John Silk

Donald Trump's niece Mary Trump is suing her uncle, claiming he cheated her out of millions after her father's death. The lawsuit comes in the wake of her recent, scathing book about the US president.

Opinion: Erdogan and Khan are hypocritical about Macron's France 1h ago

Opinion: A historic decision in Chile 15h ago