The US Democratic presidential nominee has urged lawmakers not to vote on any candidate nominated to the Supreme Court. He called President Donald Trump's plan for an earlier vote an "exercise in raw political power." 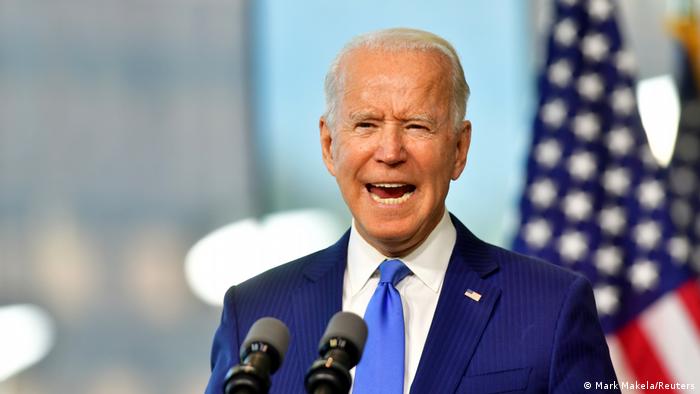 US Democratic presidential candidate Joe Biden on Sunday urged Senate lawmakers not to vote on filling the Supreme Court vacancy left by Ruth Bader Ginsburg's death until after the presidential election on November 3.

President Donald Trump's moves to rapidly replace Ginsburg were an exercise in "raw political power," Biden said in a speech in the Pennsylvania city of Philadelphia on Sunday.

Liberal Justice Ruth Bader Ginsburg died of pancreatic cancer on Friday. Days before her death, the judge said her "most fervent wish" was not to be replaced until a president was installed, her granddaughter Clara Spera said.

Trump on Saturday announced that he intended to nominate a woman to the highest court in the US in the coming week.

Ginsburg's death gives Trump, who is seeking re-election, a chance to expand the court's conservative majority to 6 to 3 at a time of a gaping political divide in the US.

Voters 'should be heard'

"Voters of this country should be heard ... they're the ones who this Constitution envisions should decide who has the power to make this appointment," said Biden.

He said he should have the chance to nominate the next Supreme Court justice, were he to win the November presidential race.

The former vice president rejected the idea of releasing the names of potential nominees, saying that doing so, as Trump did, could improperly influence those candidates' decisions in their current court roles as well as subject them to "unrelenting political attacks."

Earlier this month, Trump shared a potential candidate list of more than 20 prominent and lesser-known conservatives, including both men and women.

Biden reiterated his pledge to nominate an African-American woman to the court—  historic first.

Earlier on Sunday, Senator Lisa Murkowski of Alaska said she did not support Trump's plan to move fast on filling the seat, becoming the second of the 53 Republicans in the 100-seat chamber to object publicly to filling the vacancy before the election.