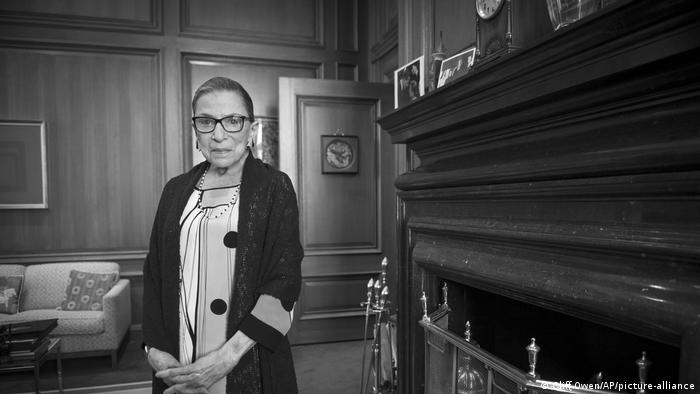 When asked how many of the nine judges on the US Supreme Court should be female — and at what point there would be enough women on the bench, Ruth Bader Ginsburg had a simple answer: "When there are nine."

An all-female Supreme Court? Why not, in her view. "Nine men was a satisfactory number until 1981." In 1981, Sandra Day O'Connor became the first woman to serve on the US Supreme Court. The second, 12 years later, was Bader Ginsburg, who was sworn in on August 10, 1993.

Democratic President Bill Clinton had nominated her for the position. Clinton was looking for a new Supreme Court judge in 1993. Bader Ginsburg was 60 at that time, a bit older to hold such a lifetime appointment. But a large number of supporters backed the women's rights activist, above all her husband, lawyer Martin Ginsburg. When Clinton met with her for an initial interview, things happened quite quickly. "Within 15 minutes I decided I was gonna pick her," he said years later. 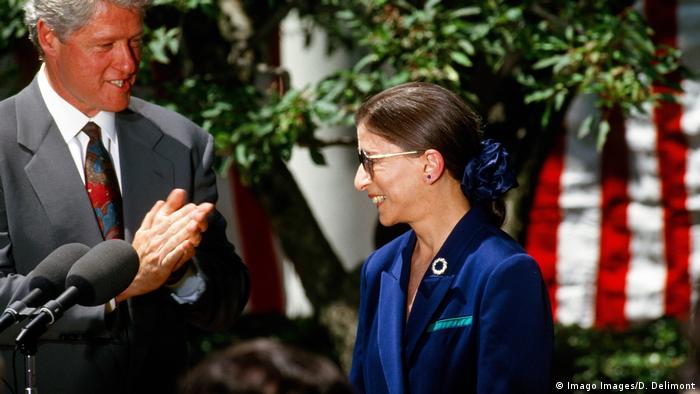 Her comparatively old age at the time of nomination was soon forgotten. Bader Ginsburg pursued her work — as always — with passion. "Law is a fulfilling love for me," she said in 2018 in the documentary film about her life "RBG," her initials and the nickname that she is affectionately called by supporters.

Joan Ruth Bader was born on March 15, 1933,  in Brooklyn, New York. She was the first in her family to go to college — and her family initially reacted skeptically to the news that she wanted to become a lawyer. But, as Bader Ginsburg recounts in "RBG", when she married Martin Ginsburg after graduating from the renowned Cornell University, the relatives were reassured. Ruth could have a go at pursuing law — and if that didn't work out, she would still have a husband.

Bader Ginsburg followed her husband to Harvard Law School, where she also began her law studies shortly after him — and 14 months after giving birth to their daughter Jane, and later a son James.

She was one of nine women among the more than 500 students in her class. The law school dean asked Bader Ginsburg to justify why she had a spot over a man. Her own husband, on the other hand, stood by her and supported her from the very beginning. Ruth and "Marty" were married for 56 years until he died in 2010.  "Meeting Marty was by far the most fortunate thing that ever happened to me," said Bader in RBG. 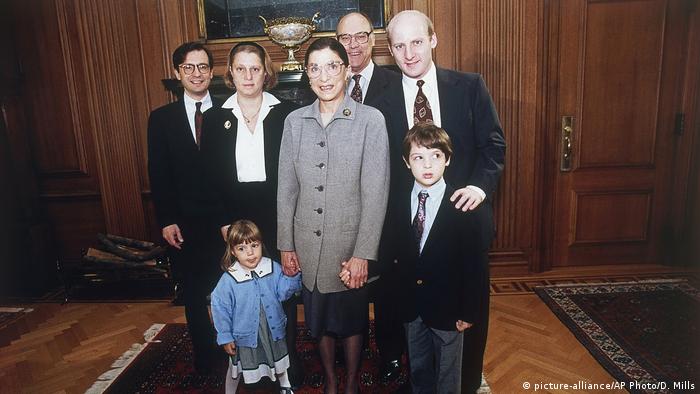 Ruth Bader Ginsburg, then 60, with her daughter, son, grandchildren and husband Marty (directly behind her) in 1993

In her second year at Harvard Law School, the young student was among the top 25 in her class and allowed to write for the prestigious journal The Harvard Law Review. At this time Bader Ginsburg had to cope not only with the demands of her studies — but also care for both her husband who fell ill with cancer and her young daughter.

'I ask no favor for my sex'

Marty Ginsburg overcame the illness and joined a large law firm as a tax lawyer in New York, where Bader Ginsburg transferred and graduated from Columbia University Law School in 1959. In the following years as a lawyer she fought against gender discrimination and equality before the law.

In 1973, in her first case before the Supreme Court, she represented a female Air Force soldier who did not receive the same benefits as her male colleagues. Bader Ginsburg quoted Sarah Grimké, a 19th-century activist, as saying, "I ask no favor for my sex. All I ask of our brethren is that they take their feet off our necks."

In total, she won five of the six cases she represented at the Supreme Court. She saw her case arguments presented to the judges as a way of introducing men to the realities of life outside the halls of the Supreme Court: That women were still being discriminated against. She did this in her own calm, but specific, way; acquaintances described her as polite, calm, reserved, and with a quiet voice. But before the Supreme Court, she chose clear words: "Men and women are persons of equal dignity and they should count equally before the law." 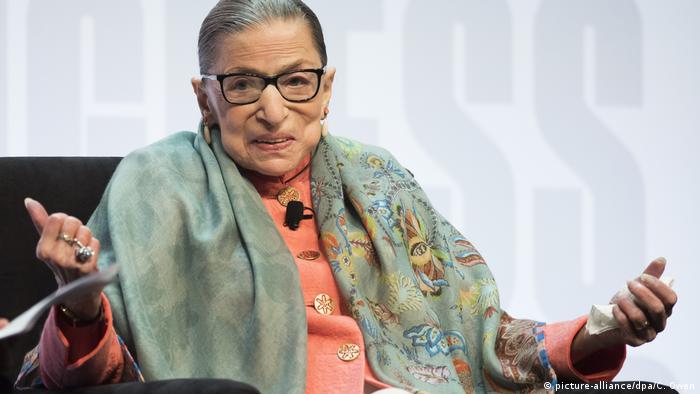 After becoming a Supreme Court justice, she continued to advocate vehemently for women's equality. Even at the Senate hearing before her appointment in the summer of 1993, she underscored that a woman must be allowed to decide for herself whether she wants to carry a pregnancy to term or have an abortion. Even after this clear statement on a highly controversial issue in the US, she was confirmed by the Senate with 96 votes to 3 — unimaginable in today's political climate.

Bader Ginsburg's written opinions on the Supreme Court rulings were always eagerly awaited. When she publicly agreed with the majority opinion of the court, she wore a certain jabot, or decorative neckwear, over her robe. If she expressed a dissenting opinion, it was another. It was precisely these dissenting opinions that made Bader Ginsburg a household name, as she would detail why she considered the top court's judgment to be wrong. Her likeness — with her distinctive glasses, lace collar — and the words "I dissent" can be found on cups, buttons, magnets and other items. 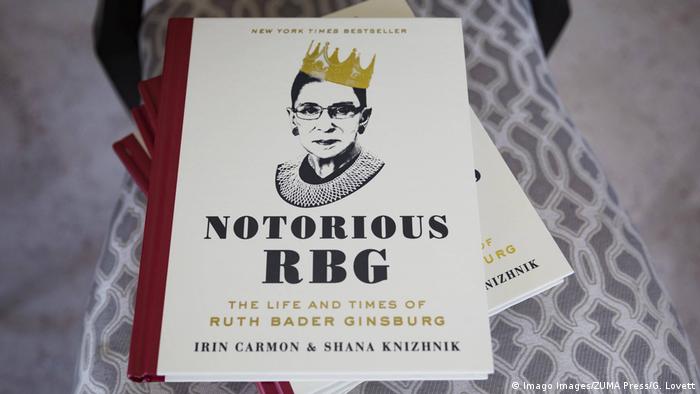 Her clear words and commitment to women's rights long into her ripe age made Ruth Bader Ginsburg a cult figure among left-leaning voters and activists. She was also nicknamed "Notorious RBG," alluding to rapper Notorious BIG. Bader Ginsburg greatly appreciated the title, although her musical passion was with opera.

But some individuals with left-leaning politics also strongly criticized Bader Ginsburg, particularly because of her long tenure as a Supreme Court justice. These critics suggest that had she resigned during President Barack Obama's term, he would have nominated another liberal judge in due course. But Ruth Bader Ginsburg had repeatedly said that she would do the job for as long as she could do it "at full steam".

Resignation for political and tactical reasons was never an option for her. She remained true to her principles until the end.

A political battle over replacing Supreme Court Judge Ruth Bader Ginsburg is unfolding that may yet throw November's presidential election into turmoil. Incumbent Donald Trump has said he wants to act immediately.

Ruth Bader Ginsburg has called Donald Trump "a faker," while Trump says she should "resign." But even liberals are questioning Ginsburg's decision to get into the gutter with Trump. (13.07.2016)

The court has agreed to hear a suit against a Louisiana law that would leave only one abortion clinic left in the state. The law resembles a Texas statute struck down by the court in 2016. (04.10.2019)