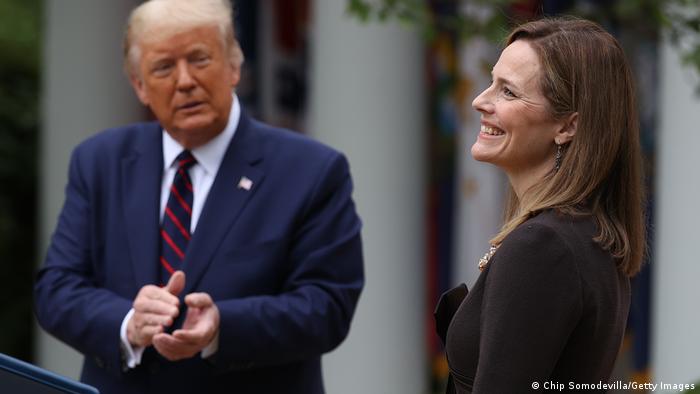 US President Donald Trump announced on Saturday that conservative Indiana judge Amy Coney Barrett would be his pick for the Supreme Court.

"Today it is my honor to nominate one of our nation's most brilliant and gifted legal minds to the Supreme Court," Trump said of Barrett at an official ceremony in the White House Rose Garden.

"She is a woman of unparalleled achievement, towering intellect, sterling credentials and unyielding loyalty to the Constitution," he added.

Barrett, a former clerk to the late Justice Antonin Scalia, said she was "truly humbled" by the nomination and quickly aligned herself with Scalia's conservative approach to the law, saying his "judicial philosophy is mine, too."

The decision will put an outspoken opponent of abortion in place of Justice Ruth Bader Ginsburg, the liberal icon who died earlier this month.

Republican senators are hoping for a swift confirmation of Barrett ahead of the November 3 election, as they aim to lock in conservative gains in the federal judiciary.

Trump backed this notion as he said: "It should be a straightforward and prompt confirmation."

Senate Majority Leader Mitch McConnell said the Senate will vote "in the weeks ahead" on Barrett's confirmation. Hearings are set to begin October 12.

Trump is hoping the nomination will serve to reinvigorate his supporters as he looks to fend off presidential hopeful Joe Biden, who he will lock horns with next week in the first of three televised debates.

Biden suggested Barrett's confirmation should wait until after the election. He said: "The Senate should not act on this vacancy until after the American people select their next president and the next Congress."

Trump's selection of Barrett drew an angry response from Biden's running mate, Kamala Harris, who said she will oppose the nomination to the Supreme Court.

Harris, who is a member of the Senate Judiciary Committee tasked with vetting the nominee, said in a statement: "It would be travesty to replace (Ginsburg) with a justice who is being selected to undo her legacy and erase everything she did for our country."

Barrett, 48, is a devout Catholic and a mother of seven, two of whom were adopted from Haiti. She was born in Louisiana and would be the youngest justice on the current court if confirmed.

President Trump is planning to name Amy Coney Barrett to the Supreme Court, according to US media reports. Analysts say Barrett, an outspoken conservative, will likely tip the court even further to the right.