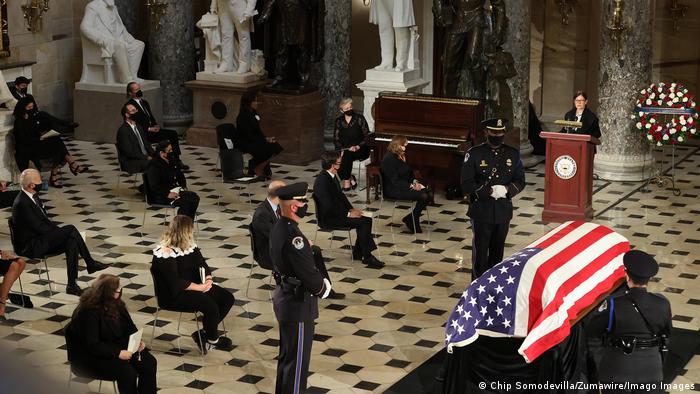 US Justice Ruth Bader Ginsburg has been honored with a ceremony in Washington, becoming the first woman and the first Jewish person ever to lie in state in the US Capitol — meaning her casket was displayed at the seat of the US Congress.

Ginsburg's coffin was displayed on a wooden stand, the same one which bore the body of assassinated President Abraham Lincoln in 1865.

Rabbi Lauren Holtzblatt told the gathered friends, relatives and politicians, that Ginsburg "pursued justice" every day of her life.

"Justice did not arrive like a lightning bolt but rather through dogged persistence," said the rabbi on Friday.

Read more: Opinion: No decency or respect after Ginsburg death

"She broke so many barriers," Harris said of Ginsburg, who in 1993 became only the second woman to serve in the US Supreme Court. Throughout her decadeslong career in law, the late justice championed women's rights. 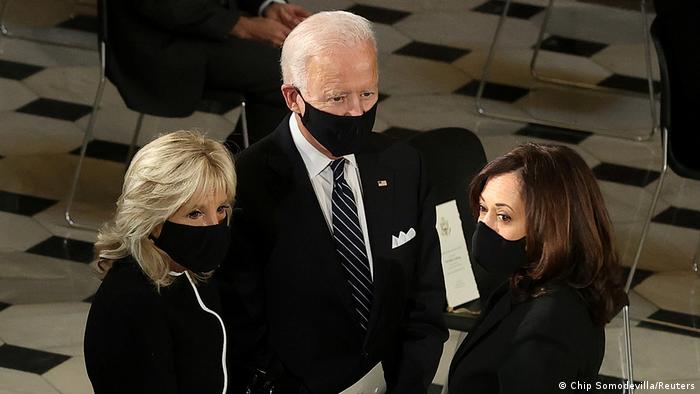 Pushups next to Ginsburg's casket

While Ginsburg is the first female dignitary to lie in state at the Capitol, she is not the first woman ever to have her casket displayed in the building. In 2005, civil rights activist Rosa Parks was honored in a similar way, but as Parks was a private citizen, this ceremony is known as "lying in honor."

Ginsburg, in the closing years of her life, gained a measure of social media popularity due to videos of her workouts. The justice's personal trainer, Bryant Johnson, paid his respects by doing three pushups on the floor near her casket.

US begins 3 days of tributes to Ginsburg

President Donald Trump paid his respects on Thursday as the justice's coffin was displayed at the Supreme Court, where he was booed by the protesters.

The two parties are engaged in a battle over Ginsburg's replacement, as fears grow that the outcome of the upcoming presidential election might be contested in court.