Rosa Parks' house to be sold at auction in New York

The family home of US civil rights activist Rosa Parks is to be sold off to raise money for a foundation in her name. Last year, a Berlin-based artist dismantled the house and shipped it to the German capital. The wooden house that was once home to Rosa Parks, the black woman who famously refused to give up her bus seat to a white person, is to go under the hammer in the US later this month.

Guernsey's auctioneers will hold a midsummer sale on July 25 & 26 that features several items related to African-American history and culture, including the tiny building.

Arlan Ettinger, of the New York-based auction house, said the two-story structure, which the civil rights activist lived in for many years, was not much to look at, but is a "national treasure" for what it represents.

The wood-framed house, which once stood in Detroit, had been set to be demolished, until it was bought for $500 by Parks' niece, Rhea McDCauley, and donated to Berlin-based American artist Ryan Mendoza.

Read more: Of 'white guys on the Moon' and black America

He had the property dismantled and shipped to his home in the German capital where he reassembled it in his backyard.

The house drew hundreds of visitors until it was dismantled again, shipped back across the Atlantic, and put on display at a university in the US state of Rhode Island.

Mendoza has since been searching for a permanent home for the delicate structure, which he believes can probably only be rebuilt one more time.

"It's a wonderful way to present the house again to the American people. Let them decide what this house is worth," the artist said. 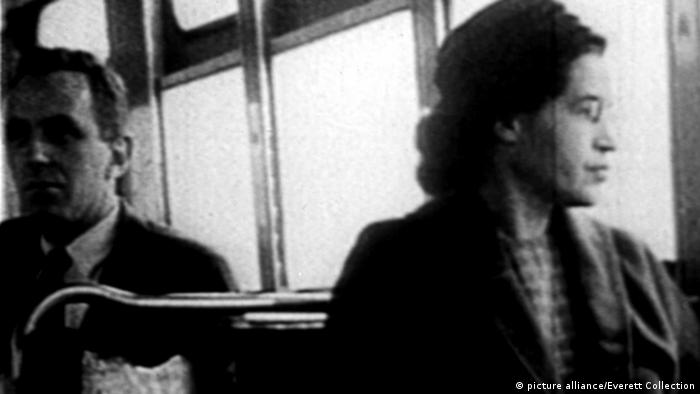 The proceeds from the sale will go in part to a foundation set up by McCauley to help preserve her aunt's legacy, Mendoza and Guernsey's said.

Parks moved to Detroit in 1957, two years after refusing to give up her seat on a bus to a white passenger in Montgomery, Alabama.

Her action inspired the local black community to boycott the local bus service for more than a year.

But she continued to receive death threats for many years after the incident, and was fired from her job at a local department store.

Her family says Parks stayed in the home — owned by her brother — along with 17 others relatives.

She went on to work with civil rights groups for most of the rest of her life. She died in 2005, aged 92.

Nobody in the USA was interested in keeping the house of civil rights' activist Rosa Parks. So, the artist Ryan Mendoza decided to demolish and rebuild it in his backyard in Berlin. (18.05.2017)

The simmering conflict between religious and secular Israelis threatened to overspill after Tanya Rosenblit stayed in her seat on a bus when Ultra-Orthodox Jewish men demanded that she move to the back. (16.01.2012)

The city of Detroit wanted to destroy the former house of Rosa Parks, "the first lady of civil rights." Her family didn't allow that to happen. It was moved to Berlin, to the garden of artist Ryan Mendoza. (07.04.2017)