US election: ′COVID changed nothing′ for Trump supporters and opponents in Ohio | Americas | North and South American news impacting on Europe | DW | 08.10.2020

US election: 'COVID changed nothing' for Trump supporters and opponents in Ohio

Many states across the US have started early voting ahead of the presidential election — among them is the crucial swing state Ohio. Voters here came out in full force, unfazed by Trump's COVID-19 diagnosis. 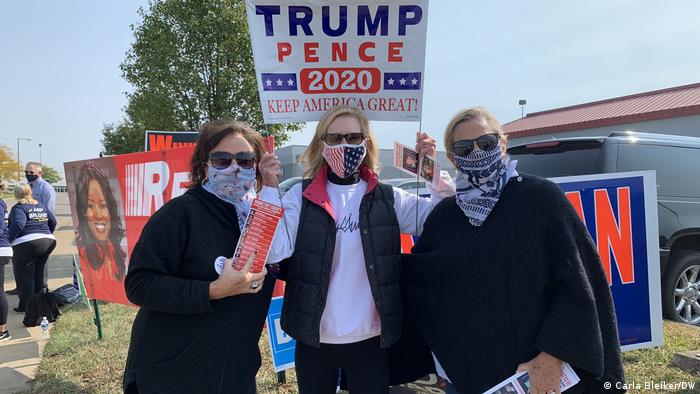 The area around the Hamilton County Board of Election building is crawling with people. Cars are trying to enter the parking lot from all directions and sheriffs are directing traffic to make sure pedestrians aren't run over on their way to the polls. It's the first day of early voting in Ohio, and judging from the crowds at this polling station on the outskirts of Cincinnati, people are making good use of it.

Nationwide statistics also show that early voting is hugely popular this year. With almost four weeks to go until the election on November 3, more than 4 million Americans in 31 states have already voted, either by mail or in person. At this time in 2016, the number stood at 75,000, according to the United States Elections Project, which compiles early voting data.

Ohio is one of the key swing states in the US that regularly see close contests between the Republican and the Democratic candidate for president. In 2016, Trump won Ohio.

Recent polls show the incumbent and Biden neck and neck. Winning swing states like Ohio is the only way to win the election — and the Buckeye state has proven to be a good predictor for who will succeed at that. Since 1944, Ohioans have only once sided with the losing candidate in a presidential race, when they opted for Richard Nixon over John F. Kennedy in 1960. 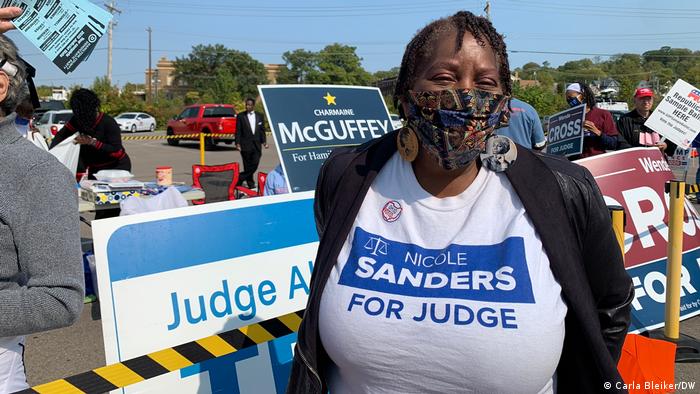 Democratic volunteer Marjorie Moseley in Ohio: 'We've never seen this many people voting so far ahead of an election'

According to Marjorie Moseley, who is part of a group of Democratic volunteers right across the street from the entrance to the Hamilton County polling station, many people were excited to vote early on the day the polls opened here in Ohio. "Some people camped out here last night, some people came at 6:30 a.m. this morning," she says. The polls opened at 8 a.m.

The enthusiasm in Hamilton County is mirrored across the country.

"We've never seen this many people voting so far ahead of an election," Michael McDonald, who manages the project, told news agency Reuters. "People cast their ballots when they make up their minds and we know that many people made up their minds long ago."

That certainly seems to be true for the voters who have come to the Hamilton County Board of Election this morning. Many say the recent development of Trump contracting COVID-19 doesn't influence their decision.

"I was never going to vote for Trump," says Bonnie, an older woman on her way to the polling station. "I hope it's going to change the minds of some people in Ohio, to see that he reaps what he sows. But for his core supporters, it doesn't matter what he does."

Two Republican volunteers standing next to Moseley's Democrat group in front of the polling station say they have "no comment" and don't want to talk about Donald Trump's COVID-19 infection. But John, a Republican voter, says that Trump's diagnosis didn't weaken his support for the president - on the contrary.

"[Trump] took all the necessary precautions, and he still got it," John says. "But the good thing is, with what we have going on with therapeutics right now, he's living proof that you can survive it and it's not a death sentence the way the Democrats would like you to believe."

Read more: Why the QAnon conspiracy theory is gaining popularity

The fact that Trump contracted COVID-19 after hardly ever wearing a mask and downplaying the pandemic that has killed more than 210,000 people in the US doesn't faze his base.

But many Democratic voters are angry about the president's carelessness and the behavior he displayed after he got sick, like driving by his supporters while he was still staying at the hospital. 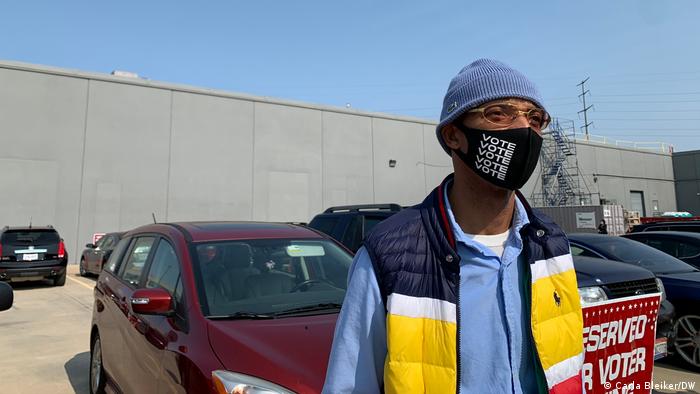 "If I had the virus and drove around in a car with my wife, waving at people, I'd probably go to prison," Greg Brown says. "He sets a bad example for his followers."

Brown explains he voted for Biden because he wants someone in the White House "who is smart" and who can bring Americans together.

Angela, an African American, is angry about the discrepancies between the treatment Trump received at Walter Reed National Military Medical Center and how other people have to deal with the virus.

"He treats it as if it's not real, and it's ok because he gets all the special and great treatment," she says. "The rest of the working people, the people who voted him in, get nothing."

Colleen is standing across from the entrance to the busy parking lot on the edge of Cincinnati with her friends Eileen and Terri. The three women haven't just come to vote, but also to show support for their president. Eileen is handing out sample ballots showing all the Republican candidates people in Hamilton County can vote for, and Colleen is holding up a Trump-Pence sign.

"COVID changed nothing" about the fact that she's going to vote for Trump, Colleen says. "Isn't it suspicious that all these Republicans got it, but no Democrats? It's weird. Are they not getting tested?"

The three friends are enthusiastic about the possibility of another four years of a Trump presidency because, they say, Trump has done a great job so far.

"Trump has worked tirelessly for the American people," Eileen says. "Biden has done nothing for 47 years."

The Republican and Democratic vice presidential nominees clashed over policy issues, but neither clinched a clear victory. The pair seemed equally matched and responded to each jab, but not everything was swatted away.