Classified as a hate group by civil rights organizations and with members with convictions for violent crimes, the Proud Boys white supremacist group was pulled into the spotlight during the US presidential debate. 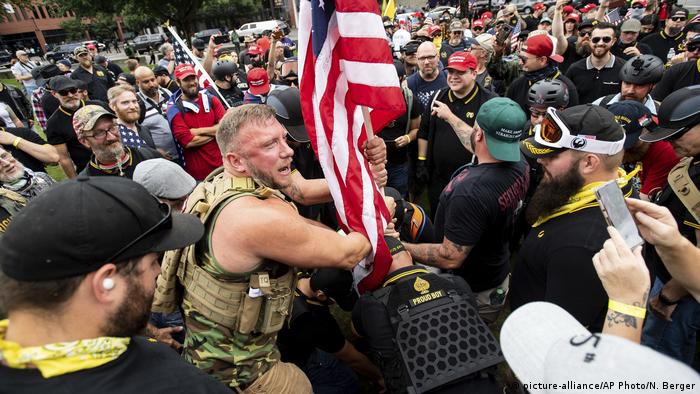 During the first US presidential debate on Tuesday evening, President Donald Trump did not condemn white supremacist groups and their role in stoking violence in American cities this summer.

"Proud Boys, stand back and stand by … Somebody has got to do something about antifa and the left," he said, sparking a social media storm of support from the right-wing group.

When the debate's moderator, journalist Chris Wallace, asked Trump if he was willing to condemn "white supremacists and militia groups," Trump answered: "Sure, I'm willing to do that, but I would say almost everything I see is from the left wing, not from the right wing."

Following a backlash over his comments, however, Trump on Wednesday claimed that he is actually unfamiliar with the group.

"I don't know who the Proud Boys are. You'll have to give me a definition because I really don't know who they are. I can only say they have to stand down, let law enforcement do their work," he told reporters while fielding questions in front of the White House.

When another reporter posed a similar question regarding Tuesday night's remark, he said: "They're going to stand down, they have to stand down. Everybody. Whatever group you are talking about, let law enforcement do the work."

Reporter: Radical militias in the US

A slew of praise for Trump

Within minutes of Trump's comment during the debate on Tuesday, members of the Proud Boys started posting in private and open social media channels, praising his remark as "historic" and an endorsement of the group's violent tactics.

On the Proud Boys' account on the messaging app Telegram, members of the group celebrated by writing things like "standing down and standing by Sir." Some members also changed the group's logo to include the words "stand back and stand by."

Read more: US neo-Nazi groups on the rise under President Donald Trump: report

The Proud Boys are categorized as a hate group by the Southern Poverty Law Center and several other civil rights organizations.

The group was established in 2016 by Canadian-British right-wing activist and Vice Media co-founder Gavin McInnes. He has since distanced himself from the group.

The Proud Boys is an all-male organization that describes itself as a haven for "Western chauvinists" and holds a history of street violence against left-wing groups and activists.

Its name is a reference to a song from the musical version of the animated Disney film Aladdin.

Proud Boys members have made misogynistic comments and openly supported rape, according to the Anti-Defamation League (ADL). The group has also touted anti-Muslim, anti-transgender, anti-immigration and anti-Semitic views, the ADL said.

"While the group can be described as violent, nationalistic, Islamophobic, transphobic and misogynistic, its members represent a range of ethnic backgrounds, and its leaders vehemently protest any allegations of racism," said the ADL.

Much like members of the Boogaloo Bois, another far-right group that is known to wear Hawaiian shirts, the Proud Boys have also adopted a uniform of choice. Members are known to wear black and yellow Fred Perry polo shirts and red "Make America Great Again" hats. They also commonly chant "Uhuru" which means "liberty" in Swahili.

Membership is typically controlled by local chapter leadership, and can be subject to initiation rituals. The group is most present and active at public rallies and protests, and several members have been convicted of violent crimes.

Proud Boys have coordinated with other hate groups at far-right gatherings such as the Unite the Right rally in Charlottesville, North Carolina in 2017. Former Proud Boys member Jason Kessler also helped to organize the event, which brought together members of the Ku Klux Klan, racist groups and militias.

The Unite the Right protest made headlines after Heather Heyer, a 32-year-old counterprotester was killed in a vehicle-ramming attack. 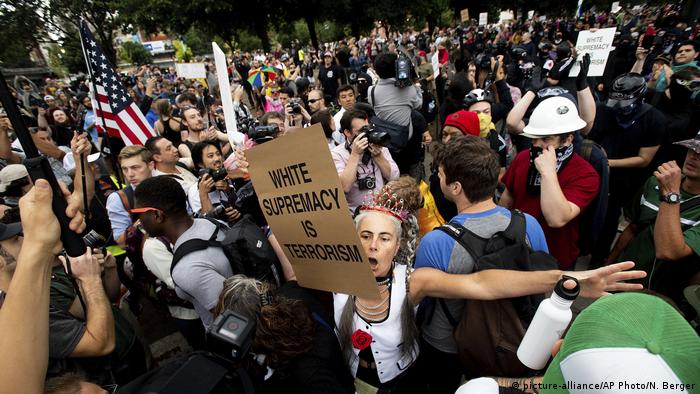 'Hallmarks of a gang'

"The Proud Boys bear many of the hallmarks of a gang, and its members have taken part in multiple acts of brutal violence and intimidation," according to the ADL.

In recent months, its members have fought with people demonstrating in Portland, Oregon and other cities that have played host to major US protests.

"Armed with bear mace, clubs, paintball guns and in the case of one Proud Boys member, an actual gun, the Proud Boys engaged in multiple acts of violence against counter-protesters and members of the media," the ADL said.

In 2018, 10 Proud Boys were charged with attacking protesters outside of a Republican Party event in New York City, after they were filmed beating demonstrators outside of the Metropolitan Republican Club.

Two of the members were sentenced to four years in prison for the attacks, found guilty of attempted gang assault, attempted assault and other charges.

"In case anyone has any doubts, the Proud Boys are a virulent strain of American right-wing extremism. They have a long track record of violence, including in Portland this past weekend," tweeted Jonathan Greenblatt, the head of the ADL.

"@POTUS owes America an apology or an explanation. Now."

Radical Militias in the US

Amid Black Lives Matter protests, US militias on both the right and left are taking to the streets.

The candidacy and presidency of Donald Trump have given right-wing extremist organizations a boost in the United States. Hundreds of hate groups are active in the country. DW takes a look.