The German Bundeswehr′s missions in the Middle East | Middle East | News and analysis of events in the Arab world | DW | 07.01.2020 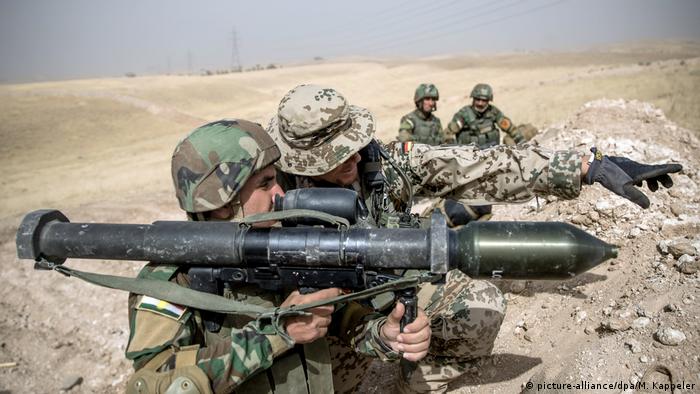 The German military deployment to the Middle East began in 2015, following the growth of Islamic State (IS) as a threat. The Bundeswehr carries out a non-combat support mission known as "Capacity Building Iraq/Counter Daesh," referring to IS by its Arabic name.

Despite having two names, Capacity Building Iraq/Counter Daesh became one mission in 2018. It contributes to the combat-focused US-led Combined Joint Task Force- Operation Inherent Resolve (CJTF-OIR), which is made up of 60 participating countries aiming to defeat IS.

Germany has a total of around 500 troops stationed across Jordan, Iraq and Syria, according to official figures, with this number allowed to grow to 700 German soldiers in the region. 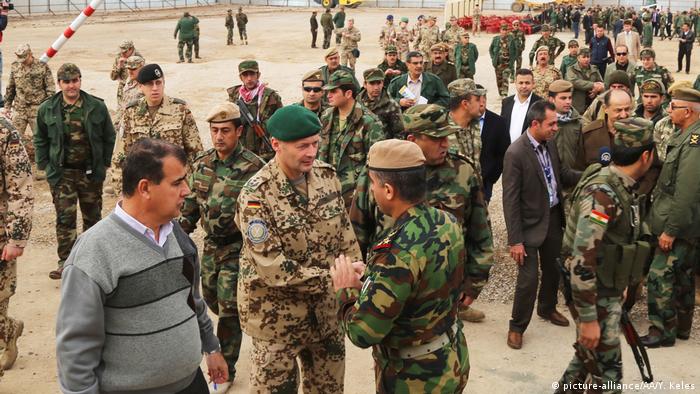 German forces carry out training in Erbil, in northern Iraq

There are around 130 military service personnel in Iraq, 32 of which were stationed in Taji. On Tuesday, those 32 were flown to Jordan temporarily. Three more soldiers, who were based in Iraq, were flown to Kuwait.

A further 90 are stationed in the north of the country in the Kurdish area around Erbil, where they focus on training to build a stable military force in the region. It is separate from the similar, non-combat NATO Mission Iraq (NMI).

The Counter Daesh operation was originally based in Incirlik, southern Turkey, before being moved to Al-Azraq in Jordan in summer 2017. There are currently four Tornado jets and an A400M air-to-air refueler at the Jordanian airbase. Until September 2019, an Airbus A310 Multi-Role Tanker Transport (MRTT) was also deployed to the region.

Both the German operations in Jordan and Iraq are led from there. The Al-Azraq airbase is currently home to 280 German soldiers. For the military personnel stationed there, activities include working with the US-led joint task force in the region, carrying out operations as part of the US's Operation Inherent Resolve. 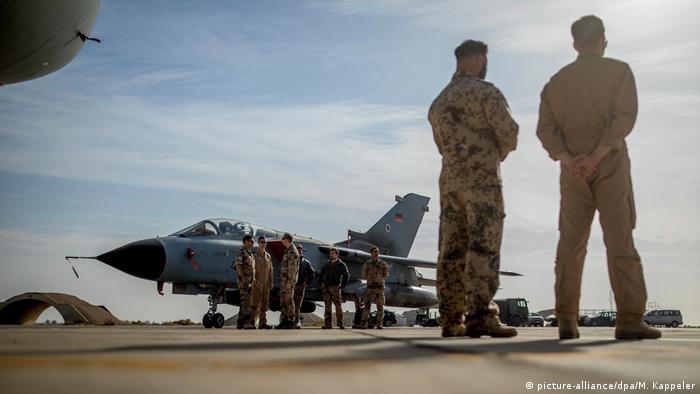 German soldiers contribute to the US-led mission, carrying out air-based reconnaissance, supporting missions through air-to-air refueling, and swapping and comparing site-information with other members of the Anti-IS coalition.

The soldiers also carry out sea and airspace surveillance and participate in NATO's Airborne Early Warning and Control System in the region.

Currently, there is no known German base in the country, but Kuwait is home to the headquarters for the US-led Combined Joint Task Force fighting IS. Three German soldiers based in Baghdad were moved there temporarily on Tuesday.

Elsewhere in the region, Germany has been active since 1978 in the UN marine mission for peace between Lebanon and Israel, UNIFIL. Currently, Germany has around 150 soldiers stationed off the coast of Lebanon on board the German corvette "Ludwigshafen am Rhein." The troops are currently in the region together with mariners from Brazil, Greece, Indonesia, Bangladesh and Turkey. The mission is currently focused on stemming the illegal weapons trade in the region.

Germany responded to growing security concerns in the Gulf region, saying it plans to "temporarily thin out" the number of soldiers in Iraq. Its military presence will be reduced particularly in Baghdad and Taji. (07.01.2020)