Taliban advances in Afghanistan give Kashmir militants a boost | Asia | An in-depth look at news from across the continent | DW | 08.07.2021

Taliban advances in Afghanistan give Kashmir militants a boost

As NATO troops continue their withdrawal from Afghanistan, experts fear that a spike in armed insurgency in India-administered Kashmir could follow. 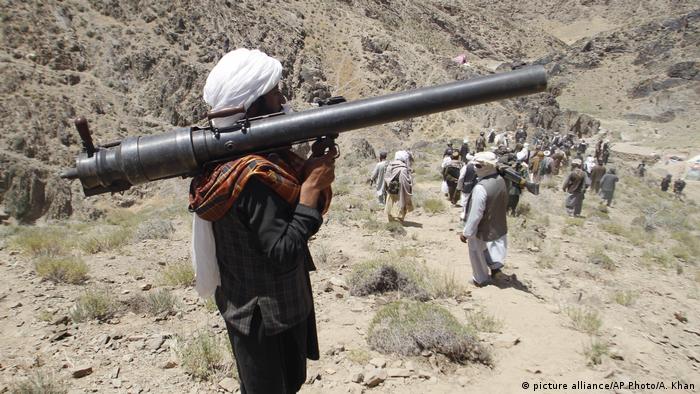 As the NATO mission in Afghanistan approaches its end after a two-decade war, the uncertain prospects for the nation are raising security concerns in India.

Policymakers in New Delhi are mulling over the implications for the disputed territory of Kashmir and calibrating ways to ensure that a Taliban resurgence in Afghanistan wouldn't embolden militancy in the region.

Hundreds of Afghan security personnel recently retreated across the Tajik-Afghan border in response to Taliban advances in northern Afghanistan.

Almost 300 Afghan servicemen who crossed the border into Tajikistan were flown home on Wednesday, a Tajik security source told Reuters.

That underlines the rapidly worsening security situation in the country.

If the Taliban, as feared, continue their advances and gain control of more territory, observers fear that could lead to a spike in armed militancy in India-administered Kashmir, as well.

Pravin Sawhney, a renowned defense expert and a former Indian army officer, told DW that, should the Taliban return to power in Afghanistan, it would certainly have an impact on Kashmir.

"In my assessment, there will be a consolidated front comprising China, Pakistan and the Taliban. And Kashmir will not remain unaffected," Sawhney said.

Sawhney remains skeptical about the ability of the current Afghan government, led by President Ashraf Ghani, to stay in power for long.

"The Taliban fighters are sons of the soil," Sawhney said. "They have not given any assurances to the US that they won't muck around. The Taliban are already controlling most parts of the country. Yes, post-NATO withdrawal, I see definite fallout in Kashmir."

The decision raised tensions with Pakistan, which sharply criticized the abrogation of the region's special status and tried to draw the attention of the international community to the situation in Kashmir.

Nevertheless, in February, military officials from both sides agreed to a cease-fire along the Line of Control (LoC), the de facto border that has divided Kashmir into two parts, one administered by India and the other by Pakistan, since 1947-48.

Speaking at a webinar organized by the Global Counter Terrorism Council on July 2, India's army chief, Manoj Mukund Naravane, said there was a "marked improvement" in the situation in Kashmir after the cease-fire agreement, particularly with regard to armed militancy.

"There has been little or no infiltration from across the Line of Control, and the number of militancy-related incidents in the (Kashmir) Valley has also seen a considerable decline," he said.

The army chief also spoke about the situation along the Line of Actual Control in eastern Ladakh, where Chinese and Indian troops have been locked in a standoff since May 2020. Naravane described the situation there as "normal."

Experts, however, believe that the sense of normalcy could rapidly change following US troops' withdrawal from Afghanistan.

Akanksha Narain, an analyst with a political and risk consultancy firm in New Delhi, told DW that Afghanistan could face a similar situation after the withdrawal of NATO troops to what it faced when Soviet forces departed in 1988-89.

"Mujahideen fighters until 1989 fought against the Soviet troops, then dispersed to other theaters, from Chechnya and Kashmir to the Middle East," Narain said.

"A similar situation will arise where many fighters, particularly foreign fighters, might pivot to new theaters or return to previously active theaters. This poses a threat for India and Kashmir," she added.

After the withdrawal of the Soviet troops from Afghanistan in the late 1980s, an anti-India armed insurgency erupted in India-administered Kashmir. While New Delhi blames Pakistan for supporting the armed groups, Islamabad denies the accusations saying that the militancy in Kashmir is indigenous.

Nevertheless, a lot has changed in India-administered Kashmir since 1989.

Top police officers in the region claim that militancy is on the wane and that armed fighters are on the run.

Authorities have also developed expertise in handling the insurgency over the last three decades.

"In the 1990s, India had no prior experience in tackling the militancy that the government encountered in Kashmir. But 2021 is a slightly different story. The Indian state already has three decades of experience in counter-insurgency in the region," Narain said.

"In the 1990s, the Indian military, paramilitary and Jammu and Kashmir Police were completely taken by surprise. Three decades later, the Indian army and local police have built a robust security grid and intelligence network," Bedi told DW. "India is now better prepared and will be able to deal with the challenges that Pakistan might throw."

"Let us face it," Bedi said. "The Taliban have not given up on the idea of the Caliphate from Afghanistan to the European border. Despite the cease-fire agreement at the LoC, Pakistan has not given up on its endeavor in Kashmir. The Taliban is a force multiplier for Pakistan. It is not a question of 'if,' but 'when.'"