Taliban advances: Why are Afghans so skeptical about Pakistan? | Asia | An in-depth look at news from across the continent | DW | 07.07.2021

Taliban advances: Why are Afghans so skeptical about Pakistan?

Afghan media are extremely critical of Pakistan's alleged support for the Taliban, who are gaining strength amid the withdrawal of NATO troops from Afghanistan. 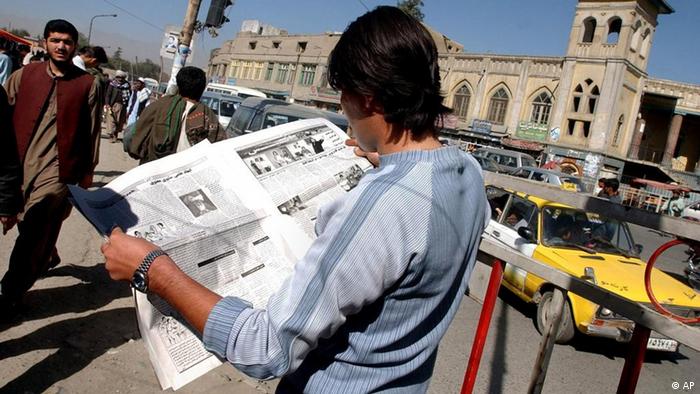 Most media outlets and political commentators in Afghanistan are blaming Islamabad for the current turmoil in their country, alleging that the Pakistani military and its intelligence agencies are backing the Taliban following the withdrawal of foreign troops, helping militants capture more territories.

These are not new accusations: Afghan officials have long maintained that Pakistan provides shelter and military support to the Taliban. But as the US is ending its two-decade war in Afghanistan, Pakistan's alleged interference in Afghanistan has become a major topic of discussion in the Afghan media.

"You must be aware that we are under attack from Pakistan. It is not the Taliban that we are fighting: We are dealing with Pakistan's proxy war," Abdul Sattar Hussaini, an Afghan lawmaker, said on a recent TV talk show.

"The Taliban do not have any plan for Afghanistan, and we are not ready to accept Pakistan's plan," he said.

Pakistan denies allegations that it supports the Taliban, but many Afghans are not ready to believe the official stance. Pakistani officials, thus, find it challenging to shape the narrative and convince the Afghan media.

Last month, Pakistani Foreign Minister Shah Mahmood Qureshi appeared on an Afghan TV show to allay concerns about his country, but it put him in an awkward position.

The show host asked whether Qureshi knew that some Taliban commanders were based in Pakistan, to which the foreign minister replied that he was not aware of it. The presenter then said that Shaikh Hakim, a Taliban peace negotiator in Qatar, had traveled to Pakistan to consult the group's leader about the peace process.

"Well, he did not contact me, so I wouldn't know," Qureshi replied.

"So, at least, you are not their [Taliban's] leader," the journalist quipped.

The Pakistani foreign minister tried to convince the Afghan TV host that the allegations against his country are baseless, but he continued to face tough question.

Experts say talk shows such as these present Pakistan as an enemy country, and subsequently shape the public opinion about Islamabad.

There are also long-standing issues between the two countries that make Afghans skeptical about Pakistan.

"Afghanistan-Pakistan relations have been tense for more than four decades. Most Afghans living in big cities have a negative view of Pakistan because they remember that Islamabad supported the Taliban and the Mujahideen in the 1990s," Sharif Hasanyar, head of the Kabul-based Ariana News TV channel, told DW.

Najibullah Azad, a former presidential spokesman, said the perception about Pakistan in Afghanistan was based on reality.

"Pakistani officials have accepted some accusations leveled by Afghan experts. Former Pakistani military dictator Pervez Musharraf admitted in an interview with an Indian media outlet that Islamabad was backing the Taliban. In 2015, Prime Minister Imran Khan, who was in opposition at the time, said in an interview that his hospital treated a wounded Taliban fighter," Azad said.

"Recently, Pakistan's interior minister, Shaikh Rasheed, admitted that the families of Taliban members were living in Pakistan, and that the injured and dead fighters were brought to the country from Afghanistan," he added.

The battle lines are drawn

With the departure of NATO troops and Taliban advances in the country, the possibility of a civil war in Afghanistan is more likely than ever. Ahmed Rashid, a prominent Afghanistan expert, recently told DW in an interview that the chaotic situation in Afghanistan "can suck in the neighboring countries."

"If that happens, that will be the end of Afghanistan," he said.

He also said the Taliban would not engage in a dialogue with Afghan President Ashraf Ghani's government "as long as the Pakistani military and intelligence continue to give them sanctuary."

"Why should they when their leaders and their families are safe? If Pakistan wants to show its sincerity, it needs to immediately force the Taliban leaders to either compromise or leave their sanctuaries in Quetta or in Peshawar," Rashid said.

In the present scenario, the battle lines are drawn, and new alliances are being forged. The media war in both Afghanistan and Pakistan is also in full swing.

Can the ties be improved?

But the fact remains that the countries are connected geographically and culturally, and the turmoil in Afghanistan will have a spillover in Pakistan.

"Civil society members and journalists from both countries have made efforts to build trust, but it is actually the job of the governments," Hasanyar said.

"Afghan media outlets reach out to the Pakistani embassy in Kabul for comments," Hasanyar said, "but Pakistani diplomats don't want to engage with them."

Azad said Afghanistan had tried to deal with the situation in a diplomatic way. "In the past few months, high-ranking Afghan officials have visited Pakistan. But nothing has changed on the ground."

"In order to improve their image in Afghanistan, Pakistan needs to stop backing militants," he stressed.

Officials in Islamabad say the relations between the two countries won't improve until Kabul stops hurling accusations against Pakistan.

Pakistan: An uncertain future for refugees

Pakistan: An uncertain future for refugees