NATO forces are withdrawing from Afghanistan. But Kabul's neighbors have conflicting interests. The omens are not good for a country that has often suffered from its strategic location. What lies ahead for Afghanistan? 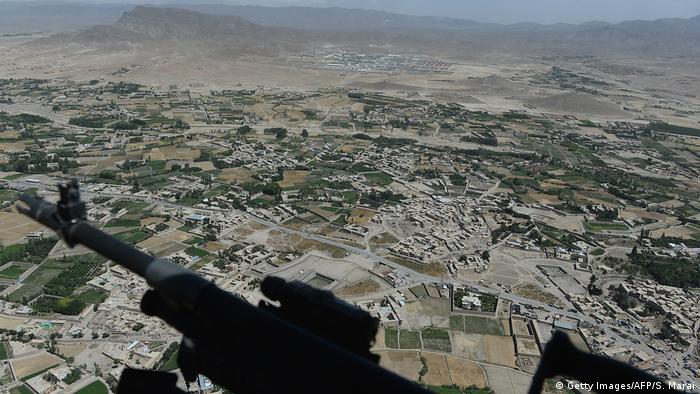 As the NATO troops withdraw, the problems remain

For over four decades now, Afghanistan has been ravaged by war. In all that time, one thing has been unchanged: Afghanistan remains a "graveyard for empires," a view once again highlighted by the pullout of US forces and their allies. And one factor is a cruel constant in this country's desperately troubled history: its central strategic location.

Afghanistan is a country of many peoples and even more neighbors — both directly and indirectly. And they could not be more different: from Iran in the west, the two hostile nuclear powers Pakistan and India in the east, China in the northeast, the oil- and gas-rich states of central Asia in the north.

For a variety of different reasons, war-ravaged Afghanistan is of crucial interest to all of these players. And for all of them, the strategic options will change when — after a military intervention that lasted 20 years — there are no longer any Western forces stationed in the Hindu Kush.

No wonder, then, that these neighboring countries are beginning to step up their activities. Thomas Ruttig of the Afghanistan Analysts Network (AAN) does not expect any significant calming of the situation in the near future.

"The individual countries have seriously conflicting interests and many of them are playing out bilateral or multilateral rivalries or tensions on Afghan territory," Ruttig told DW.

Regional tensions are particularly intense between India and Pakistan. India is one of the Afghan government's main allies and, not only because of its connection with the Kashmiri terrorist organizations including Lashkar-e Taiba, Delhi views the Taliban as a threat to its own security.

Meanwhile, despite all the denials from Islamabad, Pakistan continues to see the Taliban as "its best card in the Afghanistan game," said Ruttig. He believes that Islamabad sees Afghanistan as its own backyard and therefore tries all it can to have a profound influence on how the country is governed.

"As far as Afghanistan is concerned, it would not be advisable to invest too much faith in Pakistan's goodwill," said Ruttig.

Concern ahead of US troop departure

Pakistan's regional influence could get an additional boost, with the country being talked about as a possible location for a new US military base. "This is being hotly debated in Washington," said Andrew Watkins, an Afghanistan analyst from the International Crisis Group.

"What we're talking about is the deployment of air assets and not sizable ground forces — about maintaining the ability to conduct a drone war or even deploy standard Air Force assets. Because that is highly controversial in domestic politics in Pakistan, it will be something that they do in relative secret and that most of us will only learn about years after the fact," he said.

While the Pakistani government has publicly denied any intention of giving US forces access to its military facilities, the Taliban came out at the end of May with a preventive statement urging Afghanistan's neighbors not to host US bases. 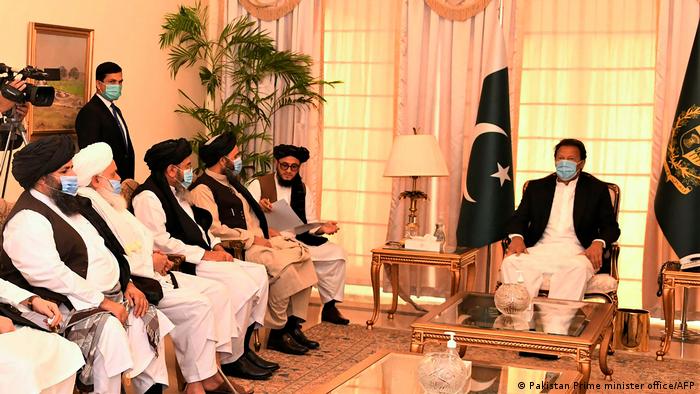 Pakistan sees the Taliban as its 'best card' in Afghanistan, as Prime Minister Imran Khan meets with Taliban leaders

For its part, Beijing views the US withdrawal from Afghanistan with very mixed feelings. Gu Xuewu, director of the Center for Global Studies in Bonn, Germany, said that on the one hand, China welcomes the decision to pull back forces from its immediate neighborhood. At the same time, however, China has profited from US efforts over the last two decades to contain the influence of the militant Islamist Taliban.

"The main fear is Xinjiang. As far as I can see, for Beijing everything else is secondary," said Gu. Xinjiang is a northwestern region of China, inhabited by the Muslim Uyghur people, which borders Afghanistan.

Islamist Uyghur groups, also operating in Afghanistan, are viewed as a serious concern in China — above all since the so-called "Islamic State" (IS) has been active in the Hindu Kush, said Angela Stanzel of the Berlin think tank German Institute for International and Security Affairs (SWP).

"IS has directly threatened China with retaliation for the persecution of the Muslim minority in China itself," she said. "Which again exacerbates Beijing's anxiety about a power vacuum in Afghanistan that could give IS the territory it needs to spread its presence in China and above all across central Asia." 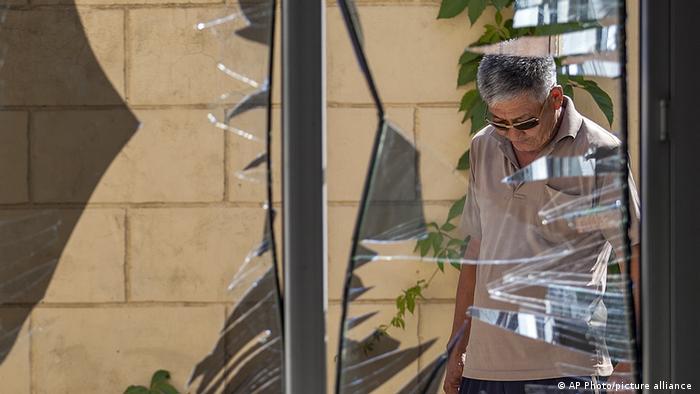 In the past, China was often described as a "free rider" in Afghanistan. Beijing, it was suggested, was allowing NATO forces to be responsible for the security of its economic interests. This initially included, for example, plans for investment in the exploitation of the raw materials that bitterly poor Afghanistan has at its disposal in large quantities that, however, simply go unused.

Nevertheless, Stanzel said there is no reason to believe that Beijing will step in and guarantee security in the region after the US withdrawal.

In Tehran, the response to the American withdrawal from the Hindu Kush has been ambivalent. The undoubted foreign policy priority for Iran is the conflict with the United States, and in western Afghanistan US forces and their bases had been shifted close to the Iranian border.

"Iran wants to see the United States fail in any of its regional endeavors," said Crisis Group expert Watkins. "And Iran wants to see the US withdraw from the region because it also views the US presence in Afghanistan as an encroachment. But what they don't want is to see the potential for total collapse or for a humanitarian disaster."

In recent decades, millions of Afghans have sought refuge in Iran as well as in Pakistan. Uprooted by war, Afghan refugees have found shelter in a camp in Iran

"Tehran actually appreciated the stabilizing impact of Western forces — even if it is something that the Iranian authorities would never have admitted to,"  said Ruttig of the Afghan Analysts Network.

This may also be applicable to Moscow. In the Russian imagination, Afghanistan has since the 19th century been seen as a southern strategic flank, as a gateway to the Indian Ocean, as a backdrop for rivalries with the West — or all of this together.

For a long time, following the withdrawal of Russian troops from Afghanistan in 1989, Moscow kept its distance from the region. In the meantime, however, Russia has again established relations with a number of players in Afghanistan, including the Taliban.

Moscow's interests are focused on security across its southern flank, measures to prevent a resurgence of Islamic movements and participation in any attempt to reach a political solution to the conflict. 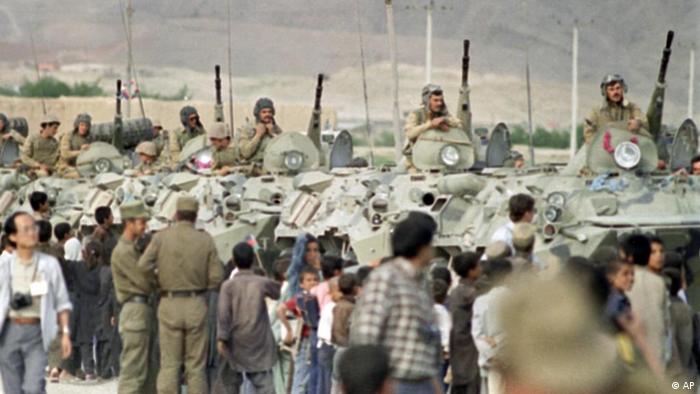 More than 30 years ago, Soviet forces left Afghanistan after years of bloody combat

There will be no resolution of the conflict in Afghanistan unless it has the backing of the nations of the region. But, according to Watkins, each country "could put a finger on the scale and throw the entire situation in Afghanistan out of balance."

But Delhi and Islamabad do have one shared interest: both are looking to secure access to the vast energy resources of Central Asia. Since the 1990s, there have been negotiations concerning a possible pipeline project to bring gas from Turkmenistan via Afghanistan and Pakistan and all the way to India. The acronym for the project is TAPI, after the names of the four nations involved.

A visit by a Taliban delegation to Turkmenistan at the beginning of February was interpreted as a sign that the pipeline project is still viable. The Taliban reiterated their support for the pipeline and promised to guarantee its security.

"For Afghanistan and all the other participants, one can only hope that this project will be realized — in a peaceful environment," said Ruttig. "It is the only realistic large-scale economic project that they have got."

What can India gain from its 'engagement' with the Taliban?

Indian media suggest that New Delhi has opened a channel of communication with the Afghan Taliban. DW analyzes what prompted the government to engage with a group that it considers terrorist.

As NATO ends its Afghan mission, Germany initially only planned to grant refuge to staff who helped its military in the past two years. The interior minister has now moved the cutoff to 2013 — amid a Taliban resurgence.