Afghanistan: End phase of US and NATO pullout begins

The United States and NATO have begun the formal process of withdrawing their remaining troops in Afghanistan. Fears remain, however, over a reaction from the insurgent Taliban. 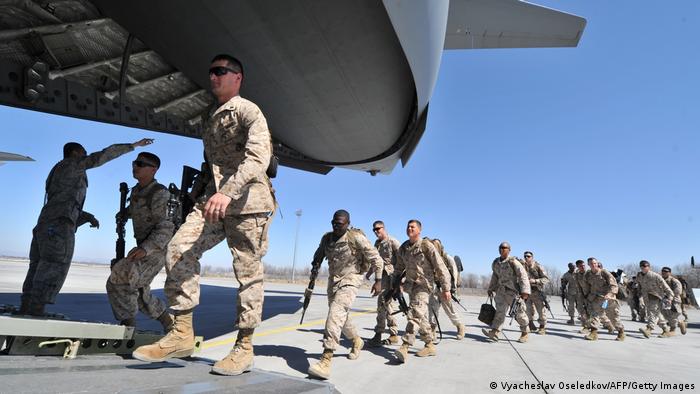 May 1 heralds the beginning of the end of the US troop presence in Afghanistan.

The United States took a step closer to ending its longest-ever conflict on Saturday as the official process of withdrawing its remaining troops from Afghanistan got underway.

President Joe Biden has set May 1 as the official start date of the pullout of around 3,000 soldiers, and some 7,000 NATO troops are also set to depart.

Two decades on from President George W. Bush's "war on terror" declaration, the US and NATO withdrawal is a statement of intent, even as attacks by Taliban insurgents continue to rise.

US officials on the ground say the withdrawal is already a work in progress, and that Saturday's landmark moment is just a continuation, but Washington has made an issue of the date because it is a deadline agreed with the Taliban last year.

People concerned 'about what will happen'

Nevertheless, Afghan security forces were on high alert Saturday for any possible attacks on retreating troops.

"The Americans will formally begin their withdrawal from Afghanistan starting May 1 and the Taliban might increase the violence," Afghanistan's acting interior minister, Hayatullah Hayat, told top police commanders late on Friday, according to an audio clip given to reporters.

"I order all of you to increase the checkpoints in cities and carry out search operations on entry gates."

Separately, officials announced the death of at least two Afghan soldiers after an explosion inside a military base at Bagram airfield in Afghanistan's northern Parwan province. Eighteen people were wounded in the blast.

Two local officials told dpa news agency that a bomb was detonated inside a mosque at an Afghan military division that is protecting the Bagram detention center.

"The bomb was placed in the ceiling of the mosque and it exploded during prayer last night," said Parwan deputy police chief Abdul Wasay Rahimi.

The Afghan base is situated just a few hundred meters away from the international troops still stationed at Bagram. The airfield there hosts the largest US military base in Afghanistan.

Will women's rights erode under Taliban?

Shortly after the September 11 terror attacks in 2001, then US President George W. Bush announced the White House's military response, targeting Islamic fundamentalist groups such as the Taliban.

Toward the end of 2014, the Obama administration announced the end of the combat role of the US-led mission in Afghanistan. However, Washington continued to play a major role in the region's conflict, and in 2017, President Donald Trump expanded the US military presence in the country.

President Joe Biden, though, is determined to end what he called "the forever war," and announced last month that the withdrawal of the remaining American forces would be complete by the 20th anniversary of the September 11 attacks.

Maas praised international efforts to rebuild the country while also promising Germany will remain a partner to Afghanistan, even after the Bundeswehr has left the country.