Tensions between the world's two most populous countries have flared once again in recent weeks, along their disputed border high in the Himalayas, prompting fears of an inadvertent escalation. 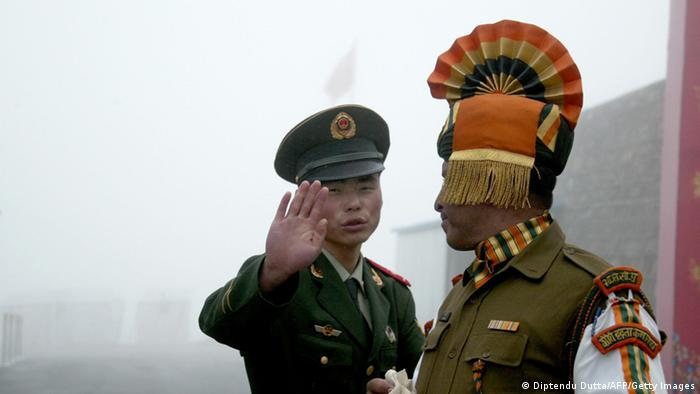 Over the past few weeks, Chinese and Indian troops have been locked in aggressive posturing at multiple locations along the two nations' de facto border, known as Line of Actual Control (LAC), raising tensions between the two nuclear-armed neighbors.

Days later, on May 9, dozens of Chinese and Indian soldiers were injured in fistfights and stone-throwing when another fight erupted at Nathu La Pass in the Indian state of Sikkim, nearly 1,200 kilometers to the east along the LAC. Many Indian soldiers are still in hospital.

Both countries blamed each other and downplayed the incidents, but also sent reinforcements and heavy equipment to the area. While China contended that the tension was triggered due to trespassing by Indian forces on the Chinese side, India blamed it on the Chinese military's attempts at hindering normal patrolling by its troops.

In a sign that both sides seemed to be digging in for another long faceoff, several areas along the border have seen major military build-up.

On May 27, US President Donald Trump offered to mediate in what he described as a "now raging border dispute." But neither India nor China has appeared keen on allowing Trump to intervene.

Indian and foreign military experts say the Chinese side has been irked by India's construction of a road in the finger area of Pangong Tso Lake region besides another road connecting the Darbuk-Shayok-Daulat Beg Oldie, the world's highest-altitude airstrip, in Galwan Valley.

The infrastructure is aimed at narrowing the gap with China's superior network of roads that it built years ago, but China is opposed to any Indian construction in the area, saying it is disputed territory.

"The Chinese don't like the infrastructure being built along the Indian side of the border, although they have built infrastructure on their side," said Srikanth Kondapalli, professor of Chinese studies at New Delhi's Jawaharlal Nehru University. "So essentially, they are saying, 'We can develop infrastructure but you shouldn't,'" Kondapalli told DW.

Cheng believes China's aggressive military activities near the border have also made India feel more insecure and concerned. "The PLA [People's Liberation Army] sometimes flies combat aircraft around Qinghai Plateau, which is a pretty provocative move," Cheng told DW. "Beijing isn't just controlling the airspace, but they are deliberately telling the world that these are armed aircraft prepared to fight."

But writing in the Global Times newspaper, famed for its firebrand nationalistic rhetoric, Long Xingchun, a senior research fellow at the Beijing Foreign Studies University, blamed New Delhi for the latest standoff.

"India in recent days has illegally constructed defence facilities across the border into Chinese territory in the Galwan Valley region, leaving Chinese border defence troops no other options but making necessary moves in response, and mounting the risk of escalating standoffs and conflicts between the two sides," he wrote.

The current standoff is the most serious faceoff between the Indian and Chinese army personnel since 2017, when they engaged in a similar clash for 73 days at Doklam. Indian troops were then mobilized to counter what were seen as moves by the Chinese side to expand its presence along the border with Bhutan. The situation was later defused through diplomatic channels.

Border skirmishes are not new to the 3,488-kilometer (2,167-mile) frontier between India and China, most of which remains disputed and undemarcated. The two countries fought a war in 1962, but the border issues have lingered on.

More than a dozen rounds of talks have failed to make substantial progress in the dispute, although there have been relatively few confrontations in recent years and no shot has been fired since the 1970s.

Over the past decade, New Delhi has looked warily at Beijing's strengthening economic, military and diplomatic muscle, which has let China expand its footprint and clout even in South Asia, a region India views as its strategic backyard. China, meanwhile, has been concerned at India's growing closeness with countries like the US and Japan.

Some experts argue that India's increasing military capabilities and decision to change the status of Jammu and Kashmir in 2019 also contributed to the latest flareup. "Indian Prime Minister Narendra Modi unilaterally changed the status of Jammu and Kashmir in August 2019, which I believe has made Beijing quite uncomfortable," Derek Grossman, a senior defense analyst for Rand Corporation, told DW. "China may be trying to find ways to maintain its territorial claims along the Line of Actual Control in this changed environment."

But Jayadeva Ranade, president of the New Delhi-based Center for China Analysis and Strategy, said there are multiple reasons for China's aggression toward India. "Chinese President Xi Jinping is currently under a lot of pressure for mishandling the COVID-19 outbreak and the measures taken to contain it," he told DW.

"The Two Centenaries goals to be achieved by 2049 are also slipping out of the grasp of China," Ranade said, referring to Xi's commitment toward making his country prosperous and fully-developed by the 100th anniversary of the founding of the People's Republic of China. "The government wishes to restore its image in the eyes of the people. This act of aggression against India is deliberate."

Ties between Nepal and China have been on the upswing, particularly when it comes to trade, investment and regional connectivity. But Beijing's growing clout in the Himalayan country has stoked concerns in India. (09.03.2020)

Nepal has protested India's inauguration of a new road that passes through disputed territory. Dozens of people were detained for demonstrating outside Indian Embassy. (10.05.2020)