Coronavirus: ′Chinese-looking′ Indians targeted in racist attacks | Asia | An in-depth look at news from across the continent | DW | 30.03.2020 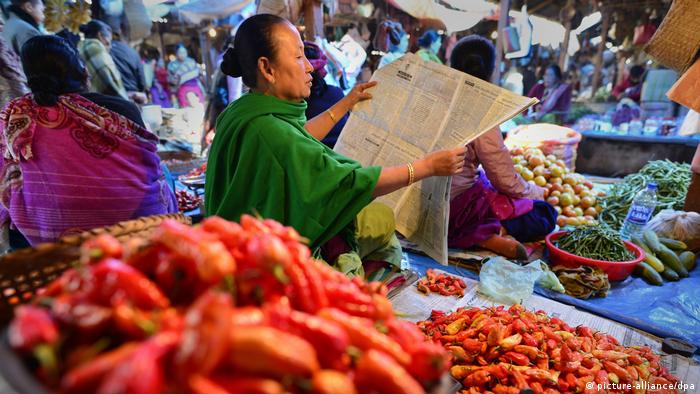 As tension rises in India over the spread of coronavirus, people originally from northeastern states have been facing racially motivated attacks in cities around the country. They are being blamed for bringing COVID-19 to India due to their appearance.

Facial features of people from northeastern India can look similar to a Han Chinese appearance. Victims of attacks say looking Chinese has caused them to be physically attacked, and abused on social media.

"My colleague was recently attacked and verbally abused outside Delhi. We have always faced racism in the past but this time it was taken to a new level," Thokchom Singhajit, general secretary of Manipur Students Association, told DW.

"I was not allowed to enter a grocery store during the lockdown. The owner turned me and my friends away," said Rippon Shanglai, a student from Manipur, a state in India's northeast.

Last week, a post-graduate student from a northeastern state told local police that she was abused in Delhi. She told police that a person called her "corona" and spat on her.

People from northeastern states said they are also being racially harassed on social media with insults like "Chinki."

Some of these people have been forcibly quarantined, despite showing no COVID-19 symptoms, because of their appearance. There are reports that apartment owners in major Indian cities have even tried to evict them during the ongoing lockdown in the country.

Rinzin Dorjee and his daughter, Tsering Yangzom, were denied entry into their apartment complex on March 16. The building's administration claimed they had been infected with coronavirus.

"We showed them [medical] documents, but the guards did not listen to us," Yangzom told DW.

Bibinaz Thokchom, a professor at Ambedkar University, said the coronavirus crisis in India has exposed vulnerable sections of society to discrimination and assault.

The Northeast Support Centre and Helpline, which was established in 2007 to assist people from northeastern Indian states, has been inundated with distress calls from across the country. "I get five to six phone calls about racial abuse almost every day," Alana Golmei, who manages the helpline, told DW.

Stopping racism not a priority

In 2012, thousands of people from northeastern states were forced to flee the southern city of Bangalore amid violent ethnic attacks. At the time, more than 170,000 people fled their homes as a result of the unrest, which spilled into other parts of the country.

In a recently published report, "Coronavirus Pandemic: India's Mongoloid Looking People Face Upsurge of Racism," the New-Delhi based Rights and Risk Analysis Group (RRAG) cited at least 22 cases of racial discrimination or hate crimes against people from northeastern states between February 7 and March 25.

"It is unfortunate that such incidents are happening. The government has not acted against the perpetrators of these attacks," Suhas Chakma, director of RRAG, told DW.

Rights activists have urged the authorities to protect vulnerable communities amid the coronavirus crisis. But some experts say the government is occupied with enforcing the lockdown and containing the spread of coronavirus, so stopping racist incidents is probably not on its priority list at the moment.