The Syrian president has met with Iranian leaders, who praised him for strengthening the alliance between Iran, Syria and Hezbollah against the US and the West. They also discussed efforts to end the Syrian conflict. 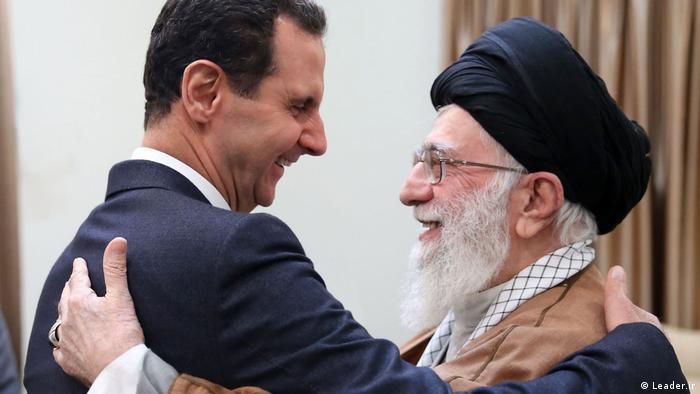 Syrian President Bashar Assad has visited Iran, his closest regional ally, for the first time since the start of the Syrian civil war in 2011, state media reported Monday.

Assad met with Supreme Leader Ayatollah Ali Khamenei and President Hassan Rouhani, as well as other top officials in Tehran. It was a rare foreign trip for Assad, who has visited Russia twice since the outbreak of the conflict eight years ago.

Read more: Syria conflict — What do the US, Russia, Turkey and Iran want?

Khamenei praised Assad for strengthening the alliance between Iran, Syria and Hezbollah against US and Western plans for the region.

"The Islamic Republic of Iran sees helping Syria's government and nation as support for the resistance movement and is deeply proud of doing it," Khamenei said.

"The creation of the buffer that the Americans are seeking to create in Syria is an example of these dangerous conspiracies which must be strongly denounced and resisted," Khamenei added.

Syrian state TV reported that Assad "thanked the Islamic Republic's leadership and people for what they have given to Syria during the war." The presidency said "both sides expressed their satisfaction with the strategic levels reached between the two countries in all fields."

Assad has retaken major cities and largely defeated rebels seeking to oust him with the support of Russia, Iran and Lebanon's Hezbollah.

The regime now controls most of the population and about two-thirds of the country, excluding a jihadi-controlled enclave in Idlib, Turkish zones in the north and a part of the country controlled by US-backed Syrian Kurdish forces. Assad has vowed to bring all territory under the state's sovereignty.

Sitting in the room during Assad's meeting with Khamenei was General Qassem Soleimani, the head of Iran's elite Quds Force — the overseas arm of the Iranian Revolutionary Guard Corps (IRGC)  which has provided the Syrian regime with military and financial support.

During their meeting, Rouhani assured Assad that "Tehran will be alongside Damascus in the stabilization, return of refugees and internal political process."

The two presidents also discussed efforts by Russia, Iran and Turkey to end the Syrian conflict.

Iranian-backed Shiite militias have carved out a major role in Syria's security apparatus, and Tehran and Damascus have in recent months signed a string of economic deals that are likely to further increase Iran's long-term presence in the country.

Tensions with Israel, US

Iran's growing influence in Syria has increased the prospect of a conflict with Israel, which has carried out dozens of attacks on Iranian forces, Shiite militia and Hezbollah.

US President Donald Trump announced in December that all American forces would leave Syria, but US officials recently said between 200-400 troops would remain in the country to support US-backed Syrian Democratic Forces and prevent a resurgence of the "Islamic State." The US also has a base at al-Tanf, near the Iraqi border, where troops are expected to stay.

The decision to maintain a US troop presence is intended to prevent clashes between US-backed Syrian Kurdish forces and NATO ally Turkey. It is also viewed as an attempt to stop the Assad regime and Iran-backed militia from widening their grip over more of Syria's territory.

Iran's US-educated Foreign Minister Javad Zarif has announced his resignation on social media. Shortly after, an aide to President Hassan Rouhani denied that Zarif's resignation had been accepted. (25.02.2019)