White House says 200 US troops to stay in Syria

The White House has said it will keep some troops in Syria as a peacekeeping force after most US forces pull out from the country. The move could be an attempt to get European allies to send soldiers to Syria as well. 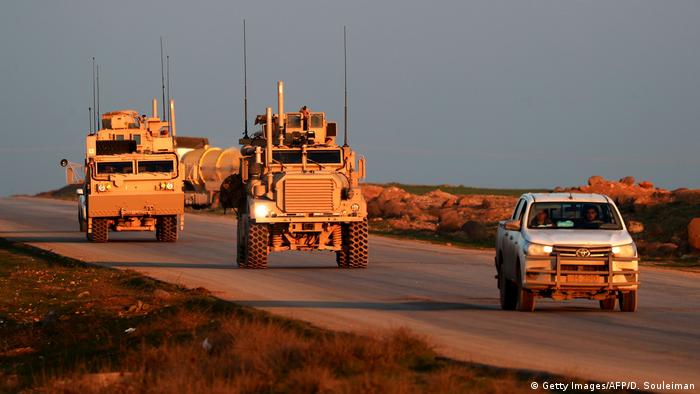 Washington said on Thursday that it planned to leave some US forces behind in Syria, even after the bulk of American troops left the country.

White House spokeswoman Sarah Huckabee Sanders said a relatively small number of troops would remain in Syria, as US President Donald Trump pulled back from a complete withdrawal.

"A small peacekeeping group of about 200 will remain in Syria for a period of time," Sanders said in a brief statement.

The decision came after a phone conversation between Trump and Turkish President Recep Tayyip Erdogan.

Sanders said the men had agreed to "continue coordinating on the creation of a potential safe zone" in Syria.

Trump stunned the world in December when, without speaking to senior aides or allies in the fight against "Islamic State" (IS), he announced that US forces would withdraw from Syria.

That decision — to withdraw some 2,000 US troops by April 30 — was also reached after a telephone conversation with Erdogan.

It prompted strong criticism from lawmakers within Trump's own Republican Party and led to the resignation of Defense Secretary Jim Mattis.

Critics say that a sudden withdrawal could lead to several undesired consequences, including a Turkish attack on US-backed Kurdish forces and the resurgence of IS.

European boots on the ground?

Leaving a small number of troops for "peacekeeping" could pave the way for European NATO allies to commit troops to the establishment of a potential safe zone in Syria's northeast.

It's believed he attempted to convince them to station troops in Syria after a US withdrawal.

European allies have so far balked at providing troops for peacekeeping in former IS areas unless Washington gives them full assurance that it remains committed to the region.

Regional leaders will soon need to discuss how Turkey will deal with an influx of former Islamic State fighters attempting to transit the country on their way back to their homelands from neighboring Syria and Iraq. (21.02.2019)

Thousands of Syrian newborns in Lebanon run the risk of being citizens of nowhere due to Kafkaesque bureaucracy. One family decided to take matters into their own hands and are moving to Belgium. Anchal Vohra reports. (25.01.2018)