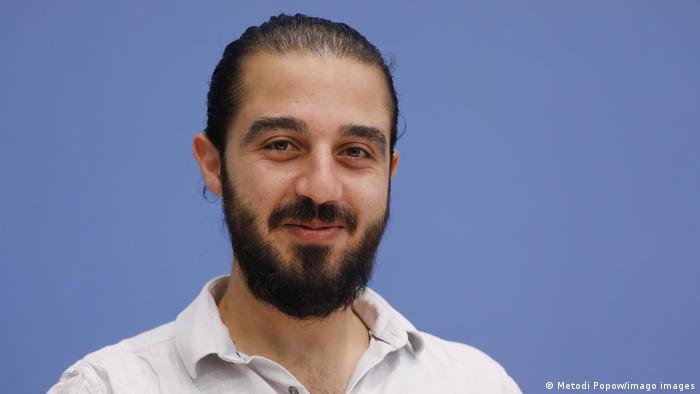 After fleeing Syria's civil war in 2015, Tareq Alaows, on Tuesday launched a campaign to Germany's parliament

Seven years ago, Tareq Alaows was studying law in Aleppo and Damascus. As the Syrian civil war broke out, he took part in peaceful demonstrations and provided humanitarian aid for the Red Crescent as the war zones widened.

But eventually, he, too, became targeted by the regime. After a brief moment of hesitation, he decided to flee in July 2015.

Now the 31-year-old hopes to become the first refugee from Syria to enter the Bundestag, Germany's parliament.

After applying for citizenship, Alaows on Tuesday launched his candidacy for the Green party to represent Oberhausen in the western state of North Rhine-Westphalia.

Germany is scheduled to hold parliamentary elections on September 26, nearly six years after Chancellor Angela Merkel, who is not running for reelection, opened the nation's borders to Alaows and hundreds of thousands of other migrants and refugees from war-torn Syria, Afghanistan and elsewhere.

It's the second general election since then, with the first in 2017 marked by the arrival of the right-wing populist Alternative for Germany (AfD) as a credible opposition force in the national parliament.

"In Germany, NRW is my home. Right here in my constituency in Oberhausen and Dinslaken was the beginning of my political work," Alaows said in his campaign video posted to Twitter.

For two months, Alaows traveled with thousands of others across the infamous Balkan route, eventually winding up being housed in a gymnasium in the post-industrial city of Bochum.

"All I wanted was a life of safety and dignity," he told German newspaper Tagesspiegel.

Shocked by the living conditions he found in Germany, within months he co-founded an initiative that advocates for increased participation and improved housing for migrants.

In just six months he learned German. Shortly afterward, he started a new career as a social worker, offering legal counseling to other refugees.

In 2018, as politicians clashed over allowing more new arrivals into Europe, as migrant vessels stranded and overturned in the Mediterranean, he co-founded the "Seebrücke" or Sea-Bridge alliance, which continues to campaign for the rescue of refugees at sea.

Bidding to be a voice for the voiceless

Running as a candidate for the environmentally focused Greens, Alaows emphasizes the link between climate change and migration policies.

"The climate crisis will further aggravate the situation of people in the global south. This is why a fair climate policy must focus on refugees and migration," he said in his Twitter campaign video.

"As the first Syrian refugee in the Bundestag, I want to give a political voice to the hundreds of thousands of people who have been forced to flee and who live with us," he said.

If successful in his bid, he said he hoped "to be the voice of all refugees."