Refugees in Germany: Fleeing Syria and Bashar Assad′s henchmen | Germany | News and in-depth reporting from Berlin and beyond | DW | 29.08.2020 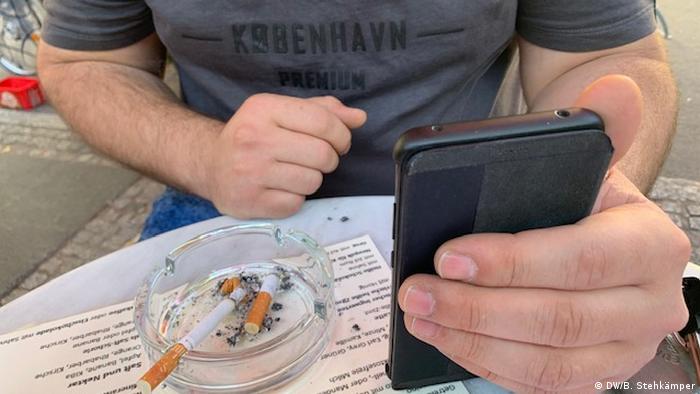 Mohammed R.* guards his mobile phone closely. His entire struggle with the German authorities is stored on it. "Look, with no grounds given, a rejection," he says with disgust and almost instantaneously produces a copy of his last letter from the local immigration office.

This one is about his request to be joined in Germany by his Jordanian wife. He is hoping this battle will be the last stage of his odyssey.

The R. family lived near the Syrian capital, Damascus — a family of devout Muslims with a liberal worldview. The Arab Spring raised their hopes, but they were dashed quickly. The father and his three eldest sons — Mohammed is the second — all ended up in jail.

They do not want to go into the details of what happened in prison. Their house was set on fire three times. In 2012, the entire family fled to Lebanon: the parents, both of whom are teachers, their five sons and their only daughter, along with her husband and their two small children.

To take some of the pressure off Lebanon, which had become home to more than 1 million Syrian refugees, the German government agreed in May 2013 to take in 5,000 Syrians. That December, it raised that figure to 10,000. Mohammed and his family did all they could to be included. They attended German integration and language courses and had all their official documents translated.

In July 2014, most of the family got the green light to come to Germany. The exception was the daughter, who was judged to be part of a different family because she is married. It was a disaster for her parents.

By the time they got to Hanover, they felt well-prepared. "I knew the names of all the German presidents. I would not have known who the Syrian ones were," says Mohammed's younger brother with a smile.

We met the family for the first time in 2015, at the refugee center in Berlin in which they were housed. Mohammed's mother still could not get over having had to leave their daughter in Lebanon, where the situation was getting worse by the day. Back in Germany, the entire family was dependent on Mohammed. He was constantly interpreting, answering questions, filling out forms.

Mohammed, 26 years old at the time, was the only member of the family who could speak English. He already had a decent command of German, even if he did have to endure the occasional patronizing correction on the part of his eight-year-old brother, Adil*. Adil seemed to absorb the German language, like most children his age would do. Whenever he would try to rub it in that he spoke better German then they did, they would answer in unison: "You go and learn proper Arabic first!"

While Adil struggled with his Arabic, the rest of the family ran the gauntlet of German courses that were often overbooked, canceled at short notice or poorly prepared. Their lives were divorced from German society. "We speak Arabic in the refugee center, Arabic with the greengrocer, Arabic in the family," explained the mother, Enisa*, after she failed her first German test.

Their 50 square meter apartment in the refugee center was also home to a growing stack of binders: one for the German Office for Migration and Refugees (BAMF), one for the Immigration Office, another for the Federal Labor Agency, for various schools — the entire family had to wade through forms that even native Germans have trouble understanding.

Meanwhile, all applications to have their daughter join them were rejected. By now, she was living in a basement in Beirut, expecting her third child. Her husband, an electrician, often did not get paid for work he had done. The R. family was getting increasingly desperate.

In 2017, things finally started improving. The R. family moved into their own apartment. Enisa was so happy that she cooked hot meals in the mornings and the evenings. After a year and a half, Mohammed was finally informed that his training as a medical engineer has been recognized in Germany. But the best news of all was his sister's inclusion in a contingent of refugees to be taken in by Spain.

Enisa blossomed. Her daughter was hardly settled in Spain when Enisa downed tools in her new kitchen and boarded a plane. After three heavenly weeks with her grandchildren, she came back speaking almost as much Spanish as she did German.

"The worst are BAMF and the Immigration Office" is Mohammed's conclusion. He is still appalled by his treatment at a hearing on his application for political asylum, when he was assigned a student as an interpreter. "You don't want to tell your life story to just anyone, and the student did not even have to sign a confidentiality agreement." At his insistence, the hearing took place in English, without an interpreter.

His older brother had a bad feeling about his hearing, too. He suffered terrible abuse in prison and he was not sure that the Kurdish interpreter got everything right. His application for asylum was rejected. Mohammed's, on the other hand, was accepted. Still, he has nothing good to say about the immigration authorities, either: "They are shameless and unfriendly and have the cheek to tell you to go to the Syrian embassy."

Threat from the Syrian secret service

The R. family's passports expired in 2018. To renew them, they would have to go to the Syrian embassy. The Syrian security apparatus would immediately have access to all their personal details, which would put family and friends in danger.

Mohammed was astonished that the German authorities acted as if there were no Syrian secret service, or pretended not to understand that any attempt by his father to get documentation from the university in Damascus would put other lives in jeopardy.

Shivers ran down his spine when he recalled his friendly neighbor in the refugee center. Later, he learned from the media that the man was a high-ranking member of President Bashar Assad's security apparatus and was wanted by police.

This was the reason he could not comprehend why Germany simply opened its borders in 2015. "We did all the integration courses and tests and revealed all our details. And then terrorists, torturers and Assad's spies were allowed in just like that. And everyone who arrived was suddenly from Syria?" Mohammed said he would have expected more from the German authorities.

Meanwhile, Mohammed found a good job in his profession and moved into his own apartment. His older brother had almost completed his vocational training and was guaranteed a job at the end. His father was set to get a part-time job in the same company as Mohammed. "You can't find a place in paradise without knowing someone," said Mohammed. He was pleased for his father, who misses his colleagues.

Now, the final piece in the puzzle is Mohammed's wife. Last year, he married Amira* from Jordan. Ever since, he's been fighting to get her to Germany. First, he lost his job, then the coronavirus crisis put a spanner in the works for the young couple. The Immigration Office would not allow him to conduct his official correspondence by email but there were no personal appointments possible because of the virus. Now Mohammed waits, hoping that this battle will be his last.

* All names were changed at the request of the R. family. The correct names are known to DW.

Federal prosecutors have arrested a Syrian doctor working in Germany for crimes against humanity. He is suspected of beating an epileptic prisoner while working for the Syrian military intelligence agency.

About 5 million people have fled Ukraine, most of them to neighboring countries. They have been met with solidarity and support by governments and citizens, but there are also questions and concerns. DW's Thomas Sparrow explains.