Authorities are still searching for Cherif C., who fled the Strasbourg Christmas market after the attack. A manhunt is underway in France and Germany, where the 29-year-old had two previous convictions. 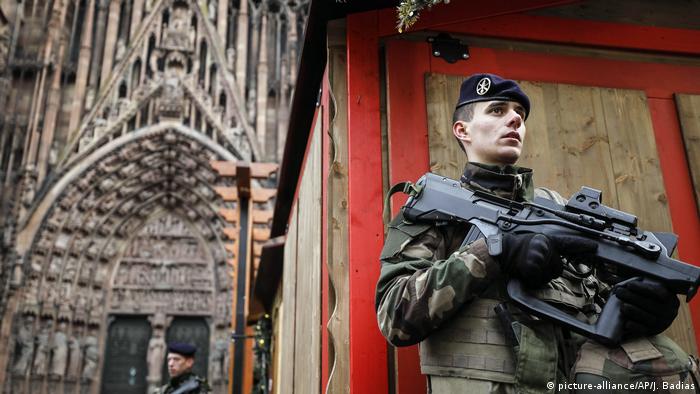 A phone call from a German number was made to the cellphone of Cherif C. just moments before he opened fire at a Christmas market in Strasbourg, France, on Tuesday, according to German regional broadcaster RBB. Citing information from security sources, RBB reported that the attacker had received the call but did not answer it.

Three people were killed and at least 12 others injured in the attack.

The phone call could provide authorities with more clues to the suspect's ties in Germany and determine whether he may have fled to German territory.

In 2016, Cherif C. was sentenced to two years and three months in prison for burglaries committed in the city of Mainz, near Frankfurt, in 2012 and in Engen, Baden-Württemberg in 2016. In total, Cherif C. amassed 27 criminal convictions for theft and violence and served time in French, German and Swiss jails.

Read more:  The Strasbourg attack suspect's criminal past in Germany

Authorities on both sides of the border are still searching for the attacker. Cherif C. fled the scene of the crime after being shot by military police and disappeared without a trace. Officers have set up checkpoints on the German border and are actively questioning the suspect's associates. Investigators said they took a fifth person into custody on Thursday in connection with the shooting.

French police, including members of the elite RAID force, cordoned off several streets in the Neudorf district, a short drive south of Strasbourg city center on Thursday, for an intense but fruitless search of the neighborhood. The suspected gunman was dropped off in Neudorf by a taxi before exchanging gunfire with officers on Tuesday night.

France has raised its security threat alert to the highest level and authorities have released a wanted poster of the attacker, in hopes that the public can assist in the search.

Police are searching for a man who opened fire near a Christmas market in the French city of Strasbourg. So far, two people have died from their injuries and at least 12 are injured. (12.12.2018)