German court documents show details about the life and criminality of the suspected Strasbourg gunman. French investigators say the suspect was radicalized in prison and was on a watch list. 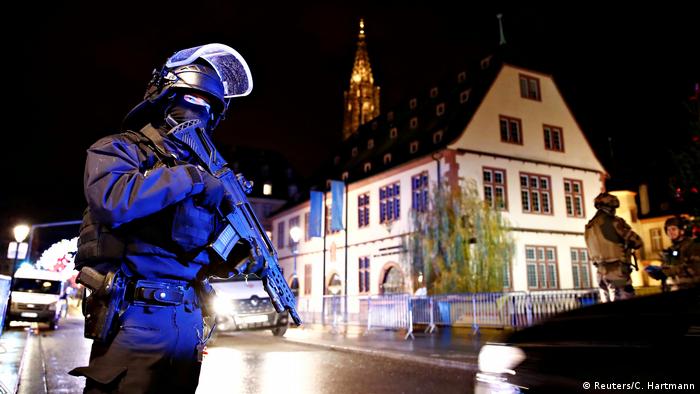 The fugitive suspected gunman who killed two people and wounded at least 12 in an attack on Strasbourg's Christmas market had previously spent time in German, Swiss and French prisons on robbery charges, court documents seen by DW show.

Cherif C., 29, was sentenced by a district court in the southern German city of Singen in June 2016 to two years and three months in prison for the 2012 burglary of a dental clinic in Mainz, near Frankfurt, and a pharmacy in Engen in southern Baden-Württemberg in 2016.

The verdict from the Singen regional court shows Cherif C. stole around €8,300 ($9,408) in cash, gold and postal stamps from the robbery in Mainz and another 315 euros through the raid on the pharmacy. DNA evidence left at the scene of the crime in Mainz and video footage from Engen linked him to the crimes.

A spokesperson from the Baden-Württemberg state Justice Ministry told DW that Cherif C. was deported to France in February 2017, around eight months after his June 2016 sentencing. The six months he spent in pretrial detention applied towards his time served.

Past convictions in France, Switzerland

According to the court verdict, Cherif C. grew up with six siblings at his parents' house in Strasbourg, where he was born. He attended school there until the age of 16 and graduated from secondary school but did not pursue further technical training.

After school, he was employed by the local authorities but since 2011 was unemployed and had spent time traveling. He consumed no illegal drugs or alcohol, according to his own statements to investigators.

French investigators say Cherif C., who is of North African descent, was radicalized in prison and had been on a watch list as a potential security risk.